Amazing Villas in Crete, A Villa Holiday in Rethymnon Crete

Aside from the best beaches in Europe, the healthiest cuisine in the world and breathtaking nature, Crete is famous for the warmth and hospitality of its people. When planning a trip with our friends this is exactly what we wanted to showcase to our guests coming all the way from the US and the UK, the richness of the Cretan hospitality and the authenticity that this island is known for. A villa holiday in Rethymnon would offer us the ultimate experience to explore the surrounding region at our own pace, enjoy the comfort of a home and to spend quality time as a group. 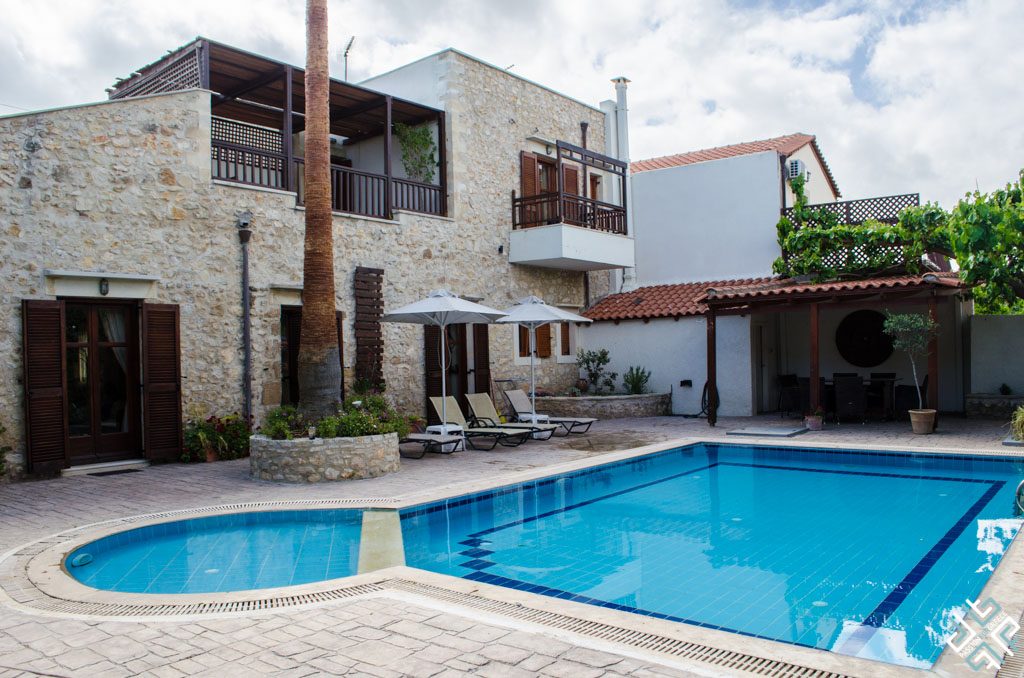 Amazing Villas in Crete is a collection of four private villas set in the heart of Asteri Village, which lies just 14 kilometers east of Rethymnon Town and a few kilometres from the seaside town of Stavromenos. This picturesque village enjoys a prime location and offers easy access to some of the highlights of the prefecture such as the Arkadi Monastery, the museum of the Eleftherna and the village of Margarites, one of Crete’s largest pottery making centers.

Our Stay at the Asteri Villa – Amazing Villas in Crete

The villa carrying the same name as the village where it is located, actually translates as the star. This original stone house was initially built in 1955 and served as a family manor dwelling and carpentry workshop until the beginning of the 1980s. The original character of the mansion has been preserved until this day, graciously incorporating elements of the old and new. The two-storey private villa is decorated with unique wooden furniture which were handmade by Argiris the owner himself. The Asteri Villa can accommodate 8 people in its four bedrooms. 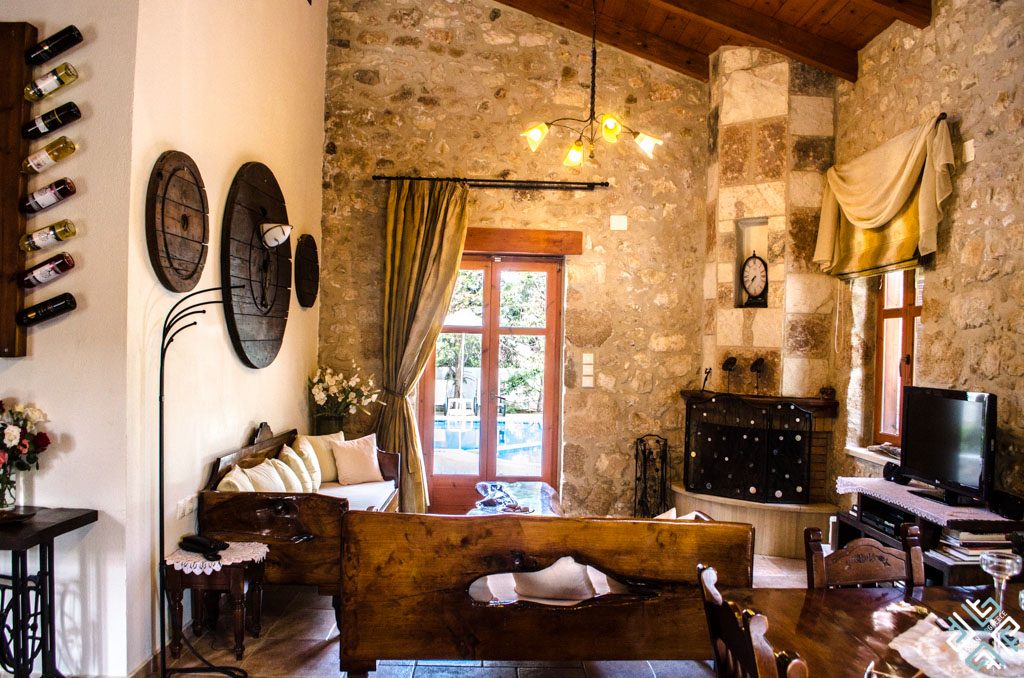 On the ground floor there is a spacious living room area with a large dining table and a fireplace. There is also an open space fully equipped kitchen featuring a microwave, dishwasher, coffee maker, oven, kettle and toaster, as well as other appliances. 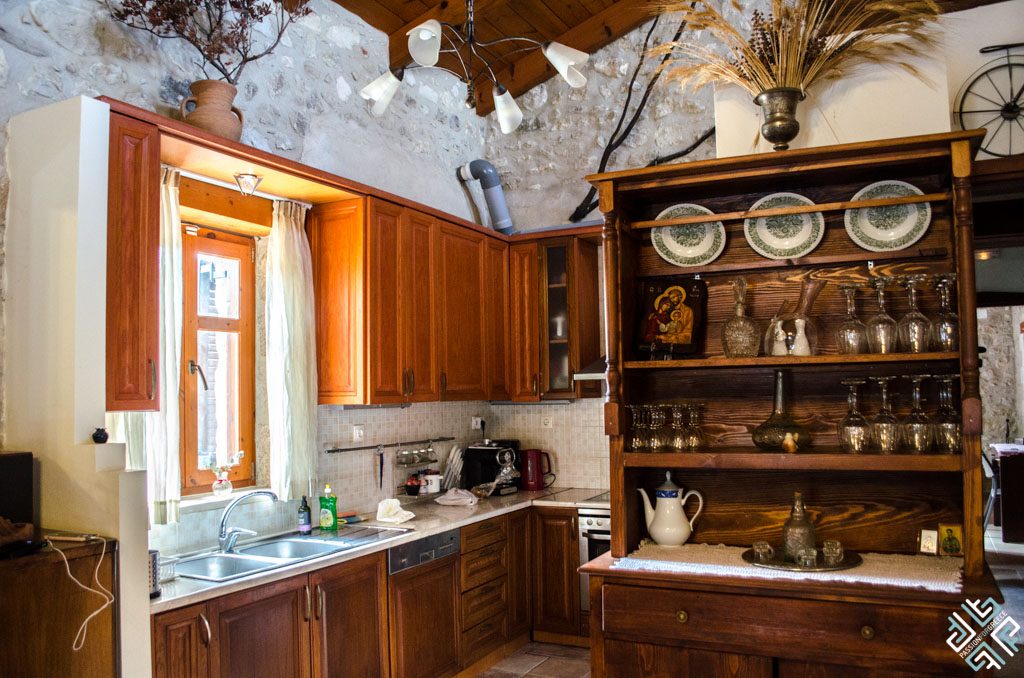 The two bedrooms are located on the ground floor, a twin room that opens up to the garden and the private pool, as well as a double room with an en suite bathroom. A wooden staircase leads upstairs where there are two more bedrooms with two bathrooms. The outdoor garden area features a freshwater swimming pool with a swimming pool for the kids. There is also a pergola area with a table for 8 people, ideal for outdoor dining. 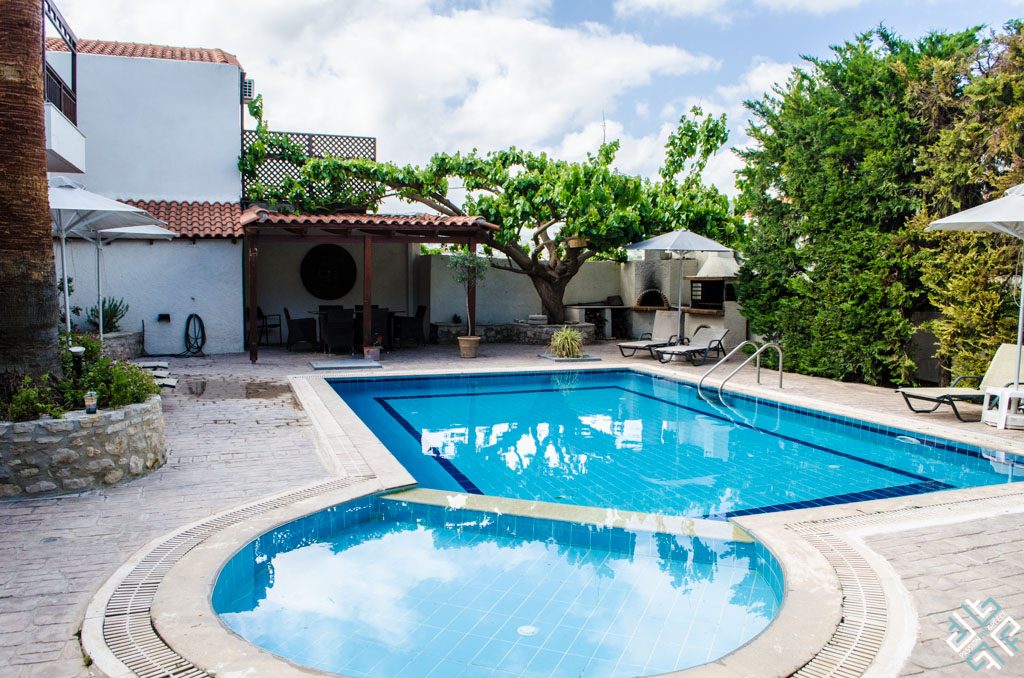 One evening we enjoyed a delicious home cooked meal, goat and hand cut potatoes which Argiris prepared in the traditional wood-fired oven. Sun loungers and the aromas of the lush garden add up to the relaxing vibe of this beautiful villa, where guests can spend their holidays basking under the scorching sun, and cool off in their own private pool. 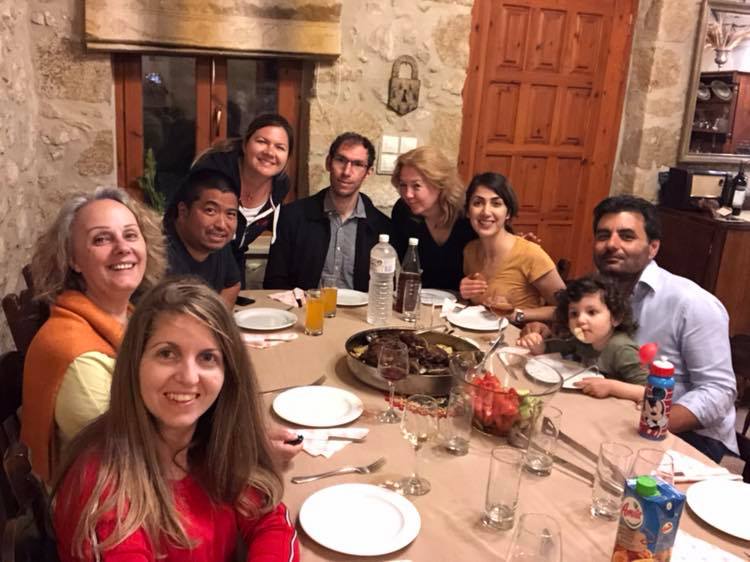 Other facilities include: private parking for two cars, air-conditioning, washing machine and dryer, underfloor heating, iron and iron board as well as a selection of other services such as babysitting, grocery shopping and activity planning.

Two of the villas: Asteri and Argiris Villa fit up to 8 people, Myrrini and Citrus Villa fit put to 6 people. For villa details please visit the Amazing Villas in Crete website. 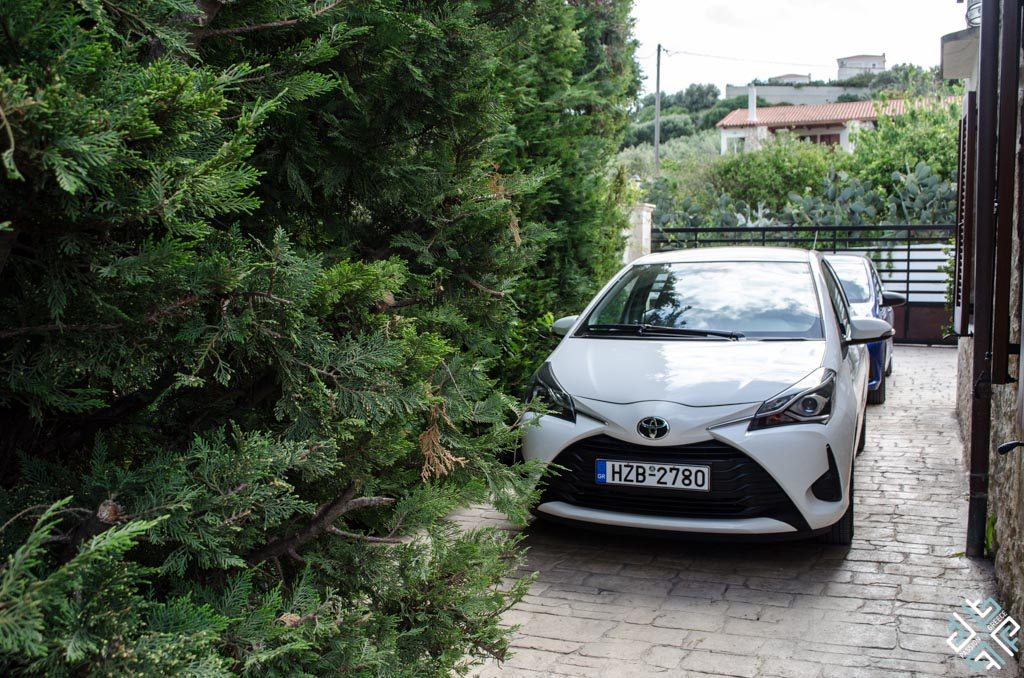 Tip: Crete is a large island and in order to be able to explore it at your own pace, renting a car is a must. We used the services of Rental Center Crete during our trip to Crete.

Discover the region of Rethymnon

Amazing Villas Crete offer a convenient location for exploring the nearby attractions and sights of historical interest.

This glorious folklore museum and family tavern was created to honour the history and turbulent past of Crete. Housed in a historical building, traces of which date back to the Minoan period, it is believed that the house was built from the stones from the ancient city, one of the 100 cities of the Minoan Civilization. 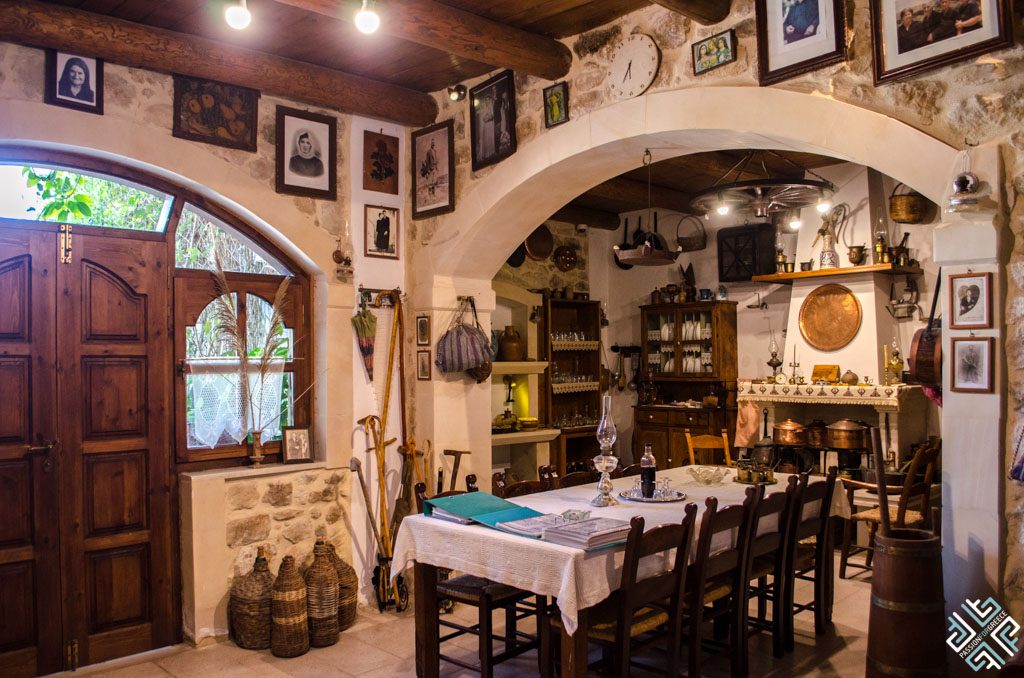 The Folklore Museum was a project started by George Polioudakis who had his family’s and village’s history close to heart and wanted to share his passion with the generations to come. Today, visitors coming to this part of Crete can experience how life was in Crete in the early 19th century. Many of the artifacts on display have been collected over the years, some of which have been considered useless by some households — have found a loving place under the roof of this historical house. The taverna is a delightful place to enjoy a traditional Cretan meal or better yet come here during one of the musical nights which takes place every Thursday from 20:30 onwards (May-October). Master traditional dancing, savour fantastic dishes prepared in a wood-fired oven accompanied by the local’s favorite drink, raki. Make sure to meet George and his son Manolis, who are guaranteed to make your visit to Poliou House a memorable one.

One of the most glorious monasteries of Crete, the Arkadi Monastery is located less than a 20 minute drive from the Amazing Villas in Crete. 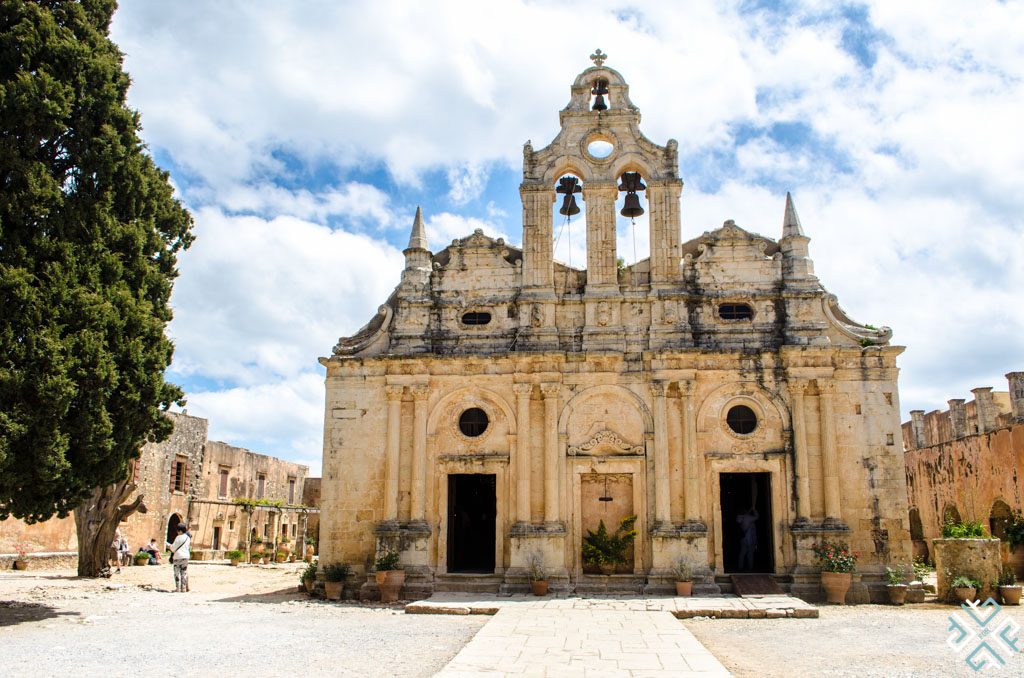 It is said that the monastery dates back to as early at 5th century and was constructed during the reign of Roman Emperor Arcadius (385-408). During the Ottoman occupation the Arkadi Monastery continued to prosper as it was supporting itself through agriculture. An event that marked its significant past was the Arkadi Monastery Holocaust that took place in 1866, it is here that many women and children sought refuge from the Ottomans, as a result during the attack they had locked themselves up in the gunpowder room and when the Ottomans reached the Monastery they set a fire and sacrificed their own lives. You can find many of the skulls of the victims on display in the ossuary located just outside the monastery. 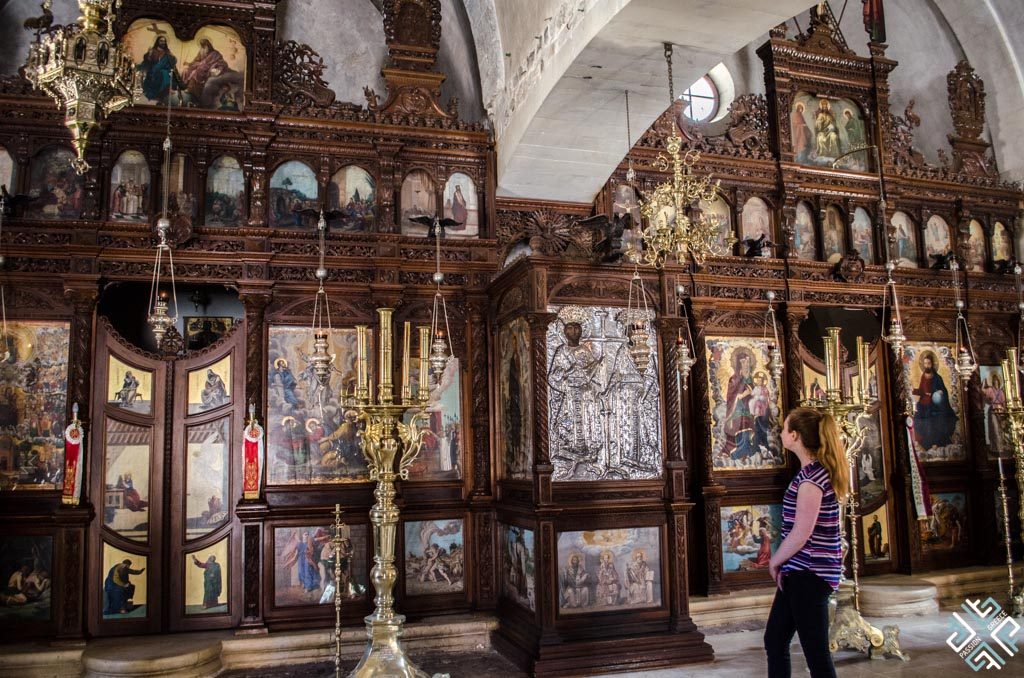 One of the most impressive museums of Crete, although smaller than those in Olympia, Delphi and Vergina — it houses impressive findings from the excavations which took place here for the past thirty years. The museum hosts several temporary exhibitions that showcase not only archaeological finds but also touch upon subjects of arts, culture and history of Crete. 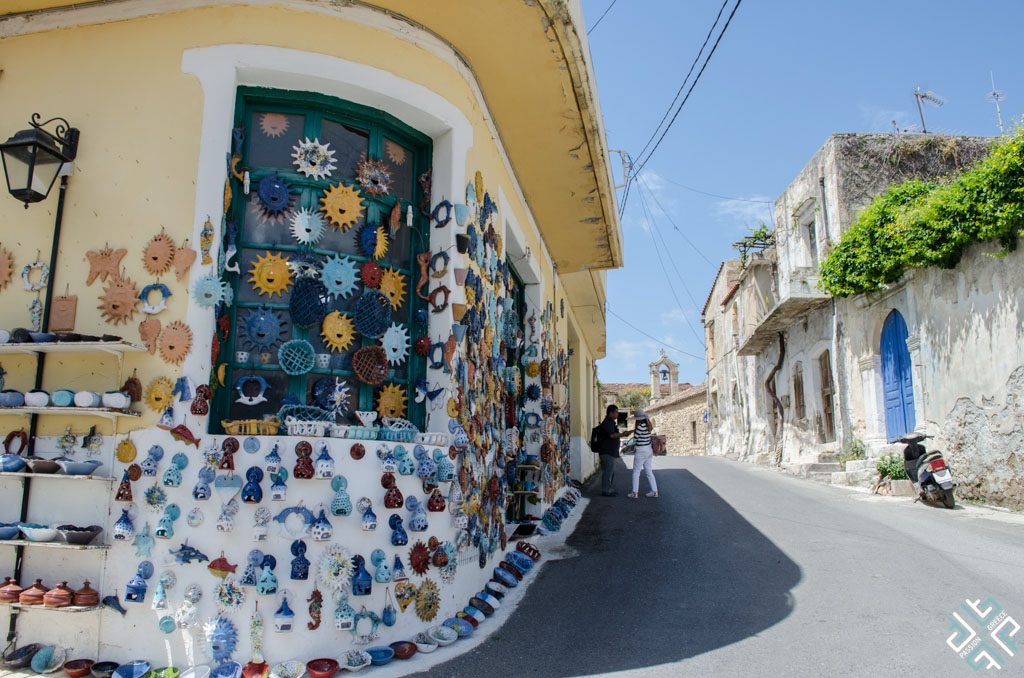 The quaint village of Margarites is one of the largest pottery making centres in Crete. The clay extracted in the region dates back to the Neolithic period and here you can find various pottery designs which have been applied since the ancient times. Walk around the charming alleyways and admire the houses, you can also learn more about the pottery making techniques from the locals. We visited George in his workshop Kerameion where he explained the process of making the traditional pottery. The Old Town of Rethymnon is dotted with historical buildings. An amalgam of cultures is evident on every corner of this marvellous town. 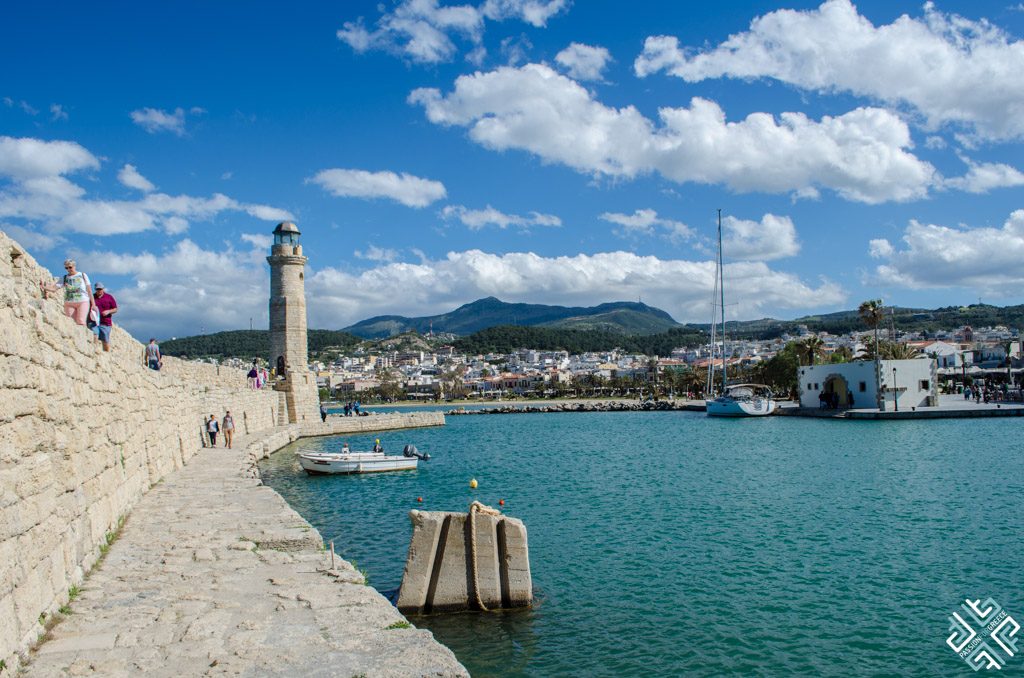 Walking around the picturesque alleyways you will come across oriental features of the Turkish period which beautifully blend with the Venetian architecture.  The Old Town of Rethymnon is one of the best preserved cities. 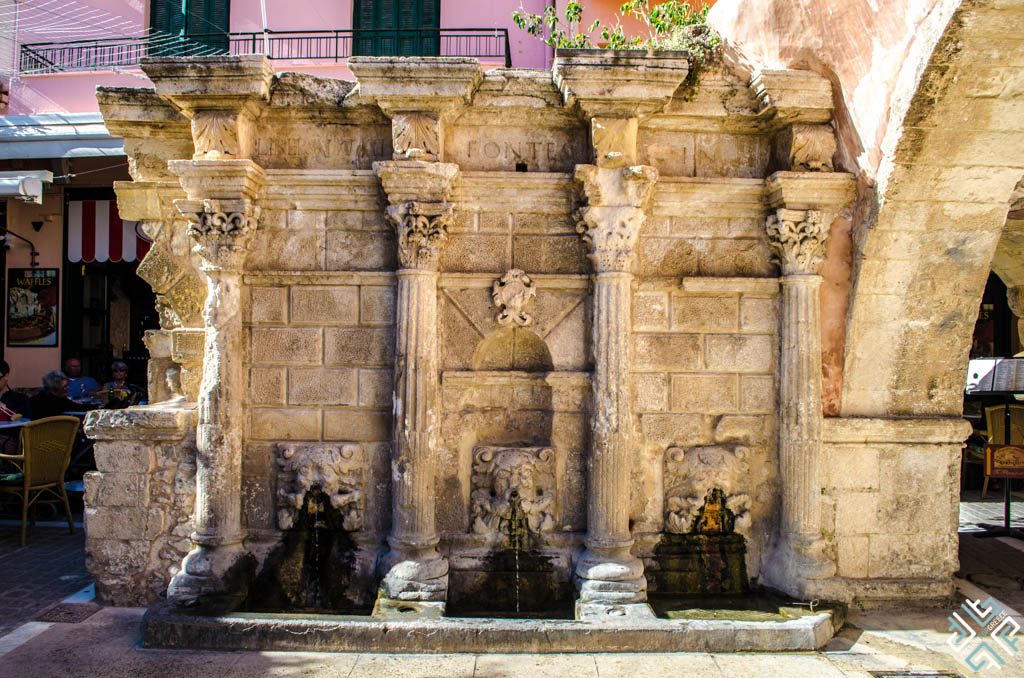 Admire several significant monuments such as the Rimondi Fountain which was reconstructed over an existing fountain that dates back to 1588, the fountain was named after the Venetian governor and was used to supply fresh drinking water. You can still drink water from this historical fountain today, which gushes out of the mouths of the three lion’s heads.

Stroll along the harbour all the way towards the lighthouse  which was built in 1864 and is the second largest Egyptian lighthouse in Crete.  The waterfront is lined with numerous restaurants and bars, adding to the overall vibrant atmosphere of this romantic town. To satisfy your sweet tooth visit the bakery of one of the oldest phyllo masters in Greece, Yiorgos Hatziparaskos makes his superfine phyllo pastry. 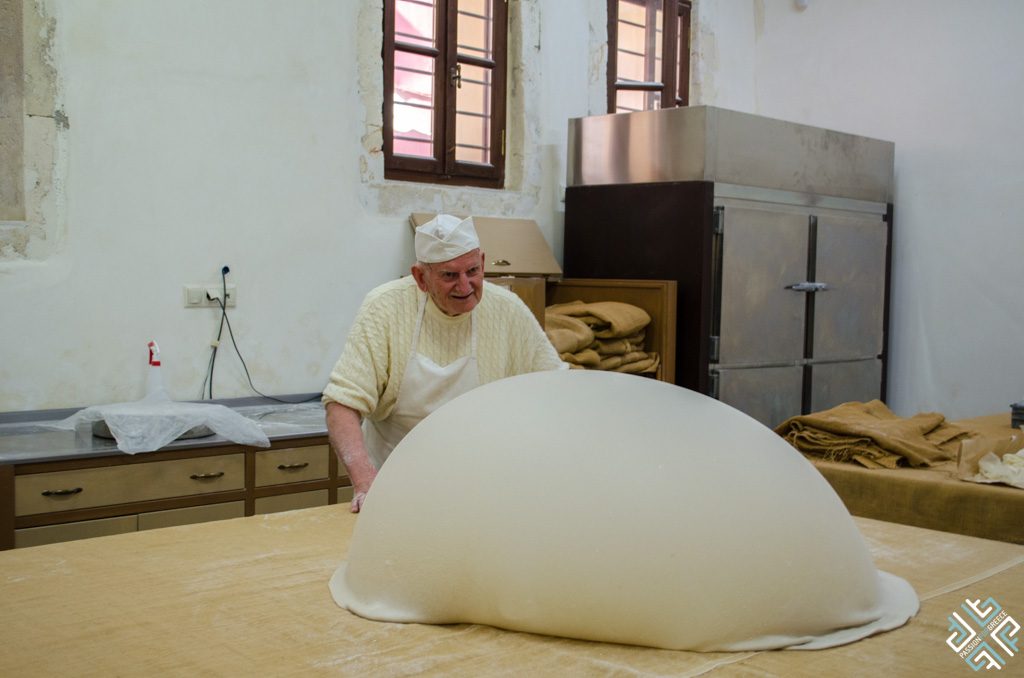 We were fortunate to get the master to show us how he swirls the dough in a bubble like shape and then laying it out with his fingertips all across the table. Rethymnon is a city full of delights for all the senses.

SpotyPal: A Must Have Gadget for a Traveler