Home Asia How to Spend a Weekend in Istanbul
AsiaTravelTravel itineraries

In Istanbul, I met a man who said he knew beyond a doubt that God was a cat. I asked why he was so sure, and the man said, “When I pray to him, he ignores me.” Lowell Thomas 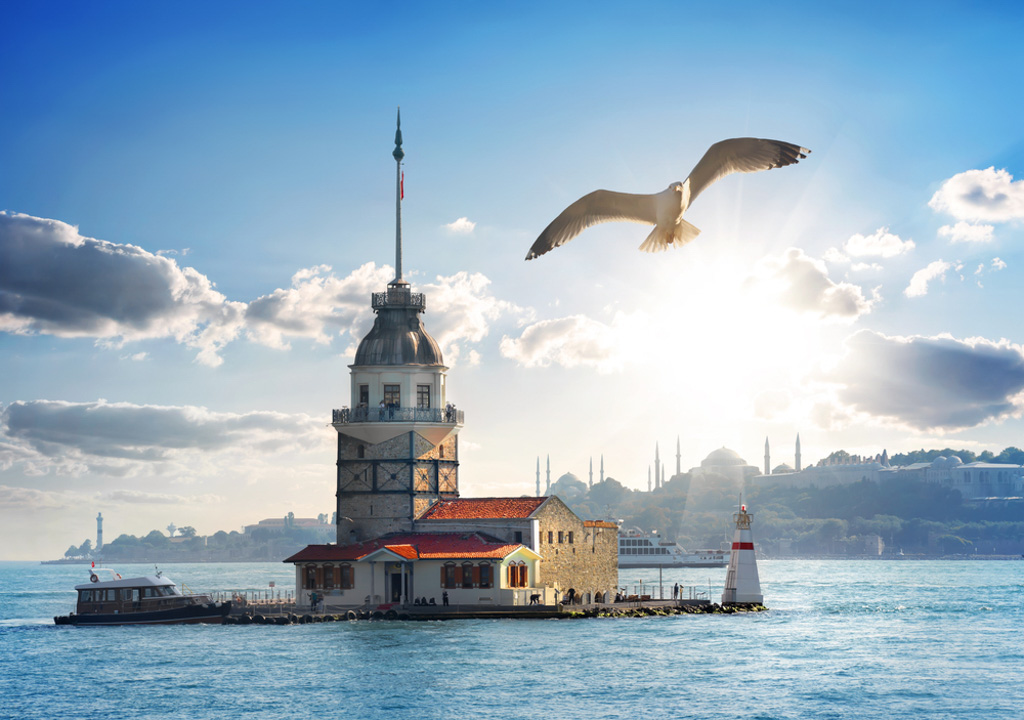 How to Get to and From Istanbul New Airport (IST)

Are you ready to explore Istanbul? We are! 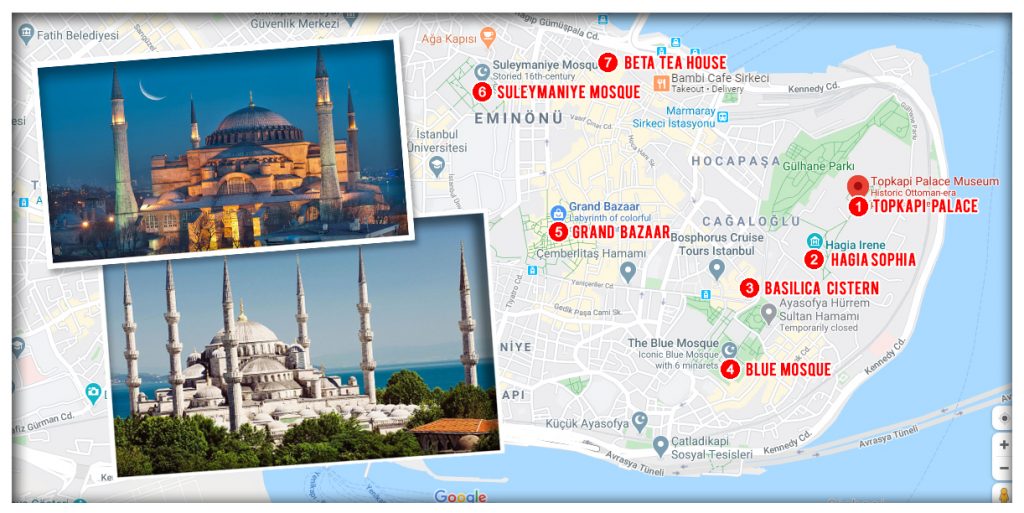 1. Topkapi Palace If you only have a weekend in Istanbul, you need to focus on that, which is really worth seeing. If that’s the case, Topkapi Palace should be on your list for sure, because it’s as essential to see Topkapi Palace as it is to eat Baklava. The palace was included in the UNESCO World Heritage List in 1985, and the size and beauty of this place are just outrageous. For 400 years, this palace was the empire’s center. It still shines in its full glory, but today more as a historical, esthetical, and architectural landmark than as a sing of power. The palace consists of two main structures, has three gates, The Harem, and a garden, so you can easily explore it for the whole day. If Topkapi Palace happens to be your principal place of interest in Istanbul, we advise you to take this 3-hour guided tour with an admission ticket. 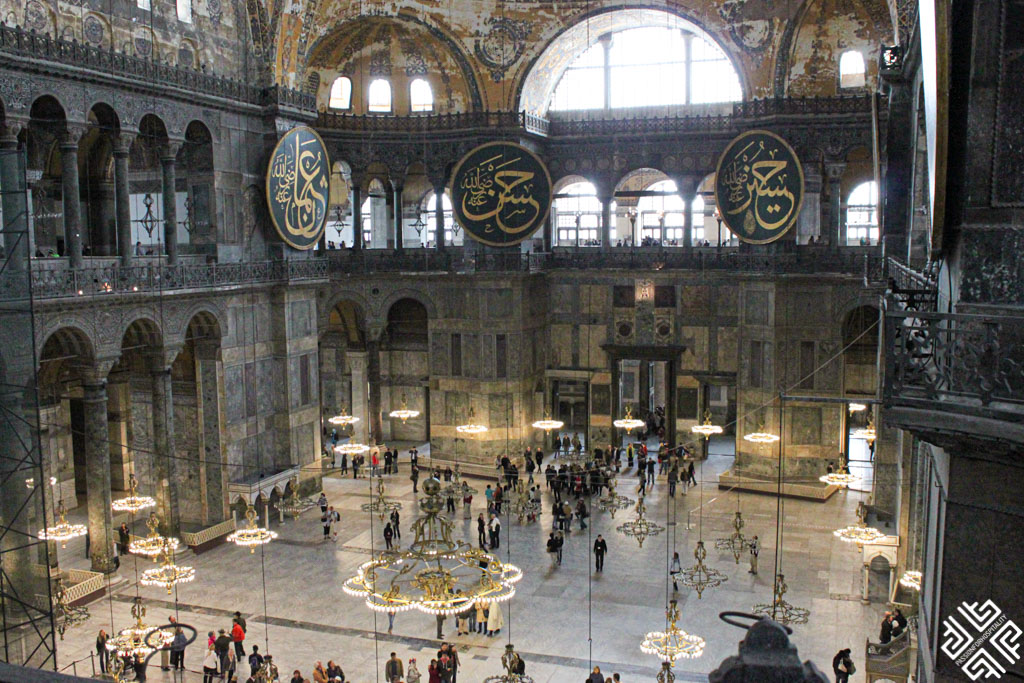 2. Hagia Sophia. Many more people heard about Hagia Sophia, rather than Topkapi Palace. And the reason for this is that it’s one of the world’s greatest monuments. Also known as the Church of the Divine Wisdom (it has several other names), this cathedral was built in the 6th century CE. First, it was a Christian cathedral. Later it became an important site of Muslim worship, and then it was converted into a museum in the 1930s. Surprisingly, at the beginning of July 2020 Turkish court annulled the site’s museum status, and it was turned into a mosque once again. According to President Erdogan, the building would remain open to all Muslims, non-Muslims, and foreign visitors. If you want to take Hagia Sophia tour, rather than explore it yourself, we recommend you to choose this one. 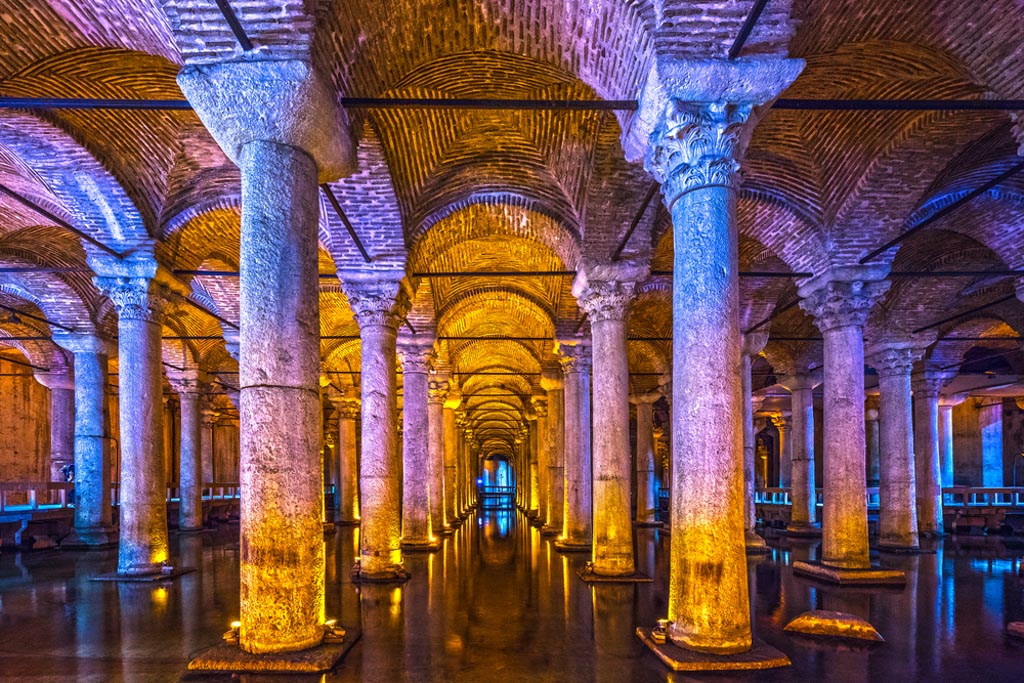 3. Basilica Cistern. If you want to visit the largest and one of the most unusual Istanbul attractions, you’re welcome to Basilica Cistern. The entrance to this landmark is across the street from Hagia Sophia. You will find this place especially attractive during the summer because this underground forest of hundreds of marble columns will give you much-desired coolness. 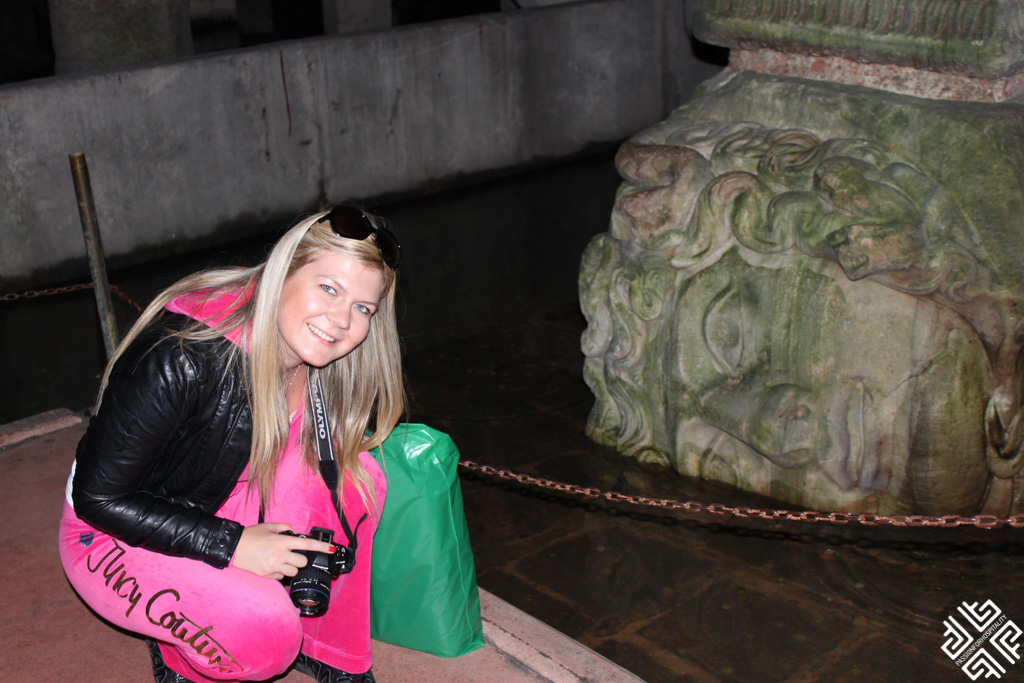 This place was built in the 6th century to meet the water needs of the Great Palace. Make sure to see the two Medusa heads located all the way to the cistern’s far left-hand corner. If you don’t want to miss a thing while visiting the Basilica Cistern, we recommend taking this guided tour that will allow you to skip the line! 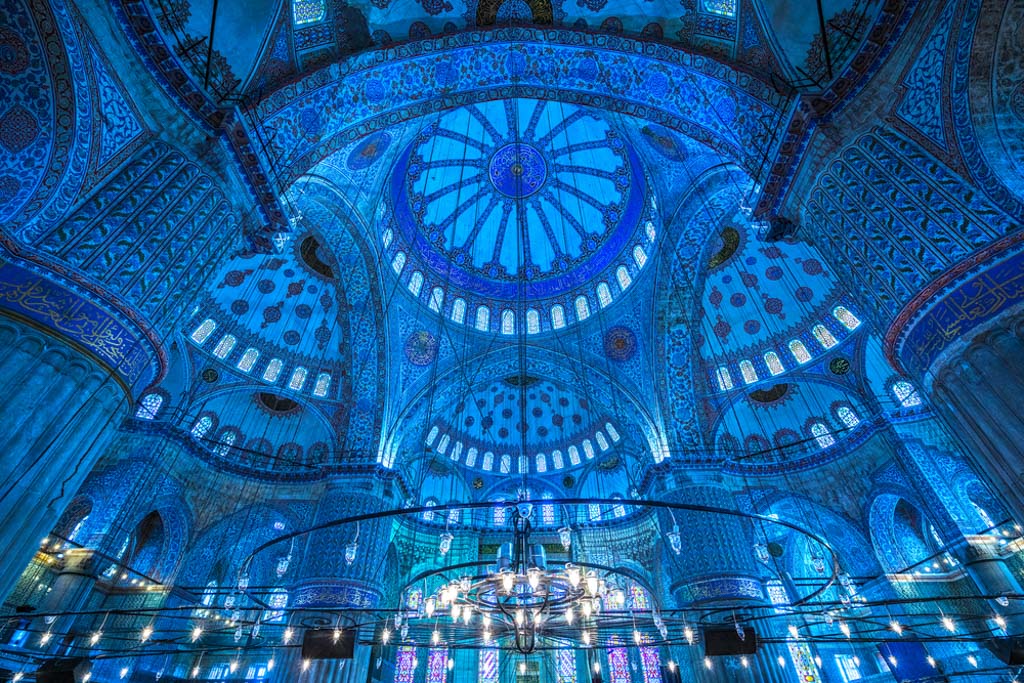 4. Blue Mosque. Another mosque that you need to see in Istanbul is the Blue Mosque. By marveling at this magnificent mosque, you may wonder why Hagia Sophia gets all the glory when this one is no less beautiful? Actually, by building it at the beginning of the 17th century Sultan Ahmet I had an intention to surpass the glory and beauty of Hagia Sophia. He built it opposite to Hagia Sophia and took staggering amounts of money from the treasury to erect it. There’s probably no point in arguing which place turned out to be more beautiful. It’s better to enjoy both of them! 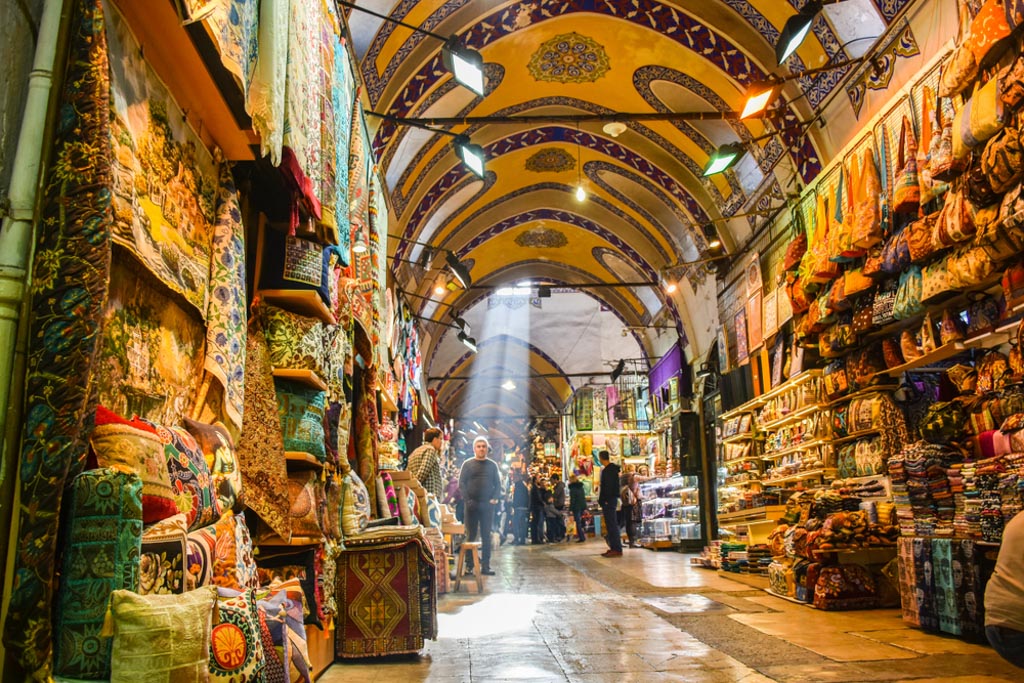 5. Grand Bazaar. You visited a palace, an underground forest of marble columns with a giant cistern and two breathtaking mosques. And now it’s time to have some fun at the Grand Bazar! Being one of the world’s oldest and largest covered markets, it has 61 covered streets and more than 4,000 shops. It was even listed as the world’s top-visited tourist attraction in 2014! With a size like this, you shouldn’t expect to explore even 20% of the market if you’re in Istanbul only for a weekend. What you can do, though, is bargain with the sellers, buy a lamp, get a collection of soap, indulge in quality spices or purchase a small Turkish carpet to remind you about your trip. 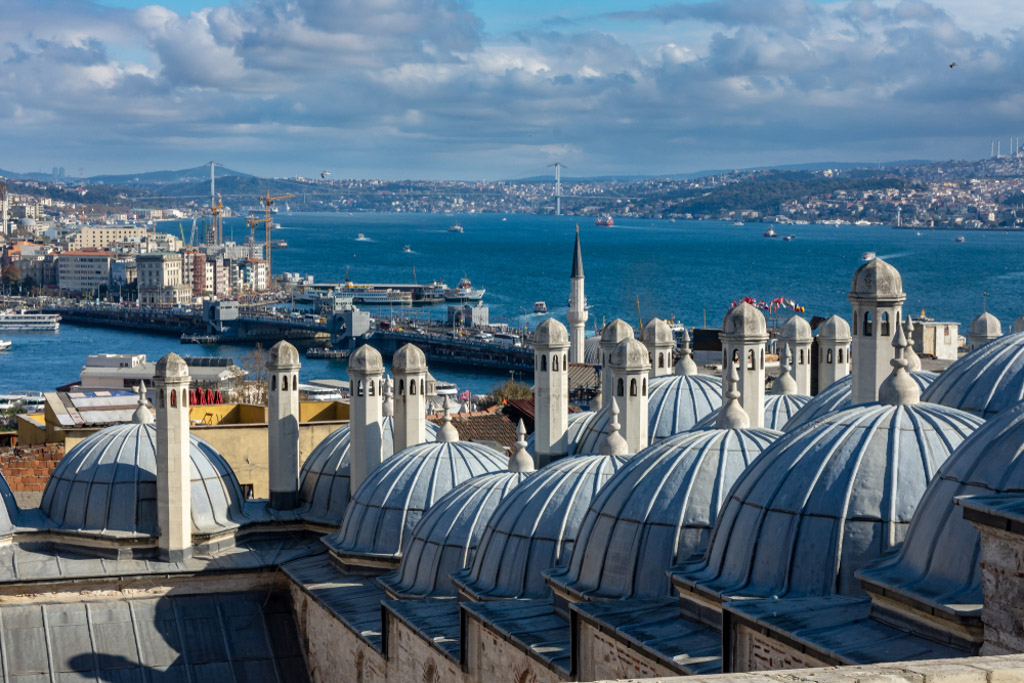 6. Suleymaniye Mosque. If you think you have seen enough mosques for one day, you’re wrong. There’s one more architectural masterpiece before we let you go to finally have your evening tea and relax. The Süleymaniye Mosque was named after the Ottoman sultan Suleyman in the 16th century, and it’s designed to glorify the ruler. You will find a lot of old Ottoman timber houses on the streets around the mosque. They’re also worth seeing provided you still have the energy to explore. 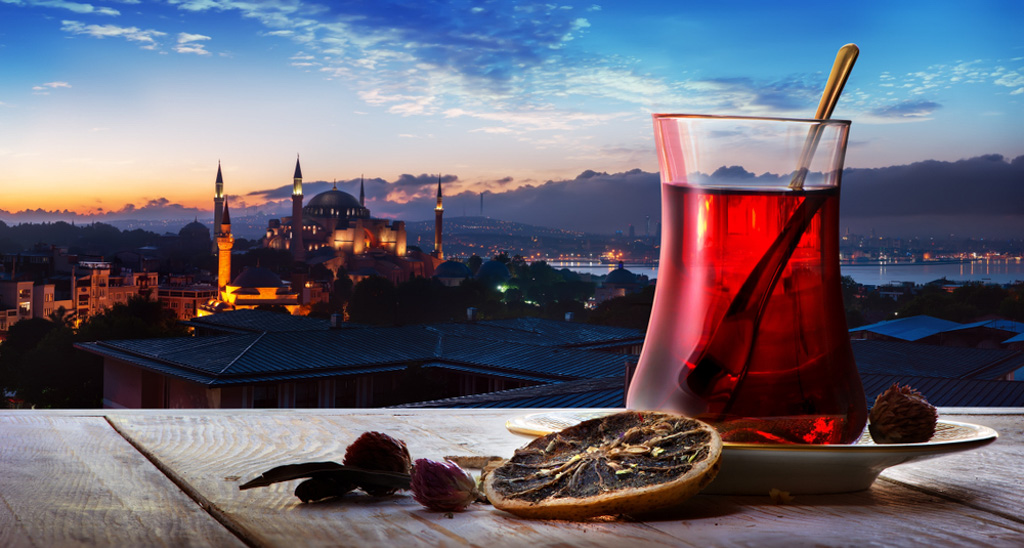 7. Enjoy a Cup of Turkish Tea. When the walking is over and much anticipated evening coolness starts to take over the city, it’s the best time to have some signature Turkish tea. You can go to Beta Tea House, which is located not far from the Süleymaniye Mosque to do it. Tea is one of the fundamental Turkish social life elements, but it wasn’t always this way. You will be surprised to know that tea consumption started to spread in Turkey only in the 19th century. Today Turks are one of the most dedicated tea consumers in the world. An average Turk has 1,000 cups of tea per year. Turks drink tea even during the hottest days of summer. Treating yourself with traditional Turkish tea would be a great conclusion of your first day in Istanbul. 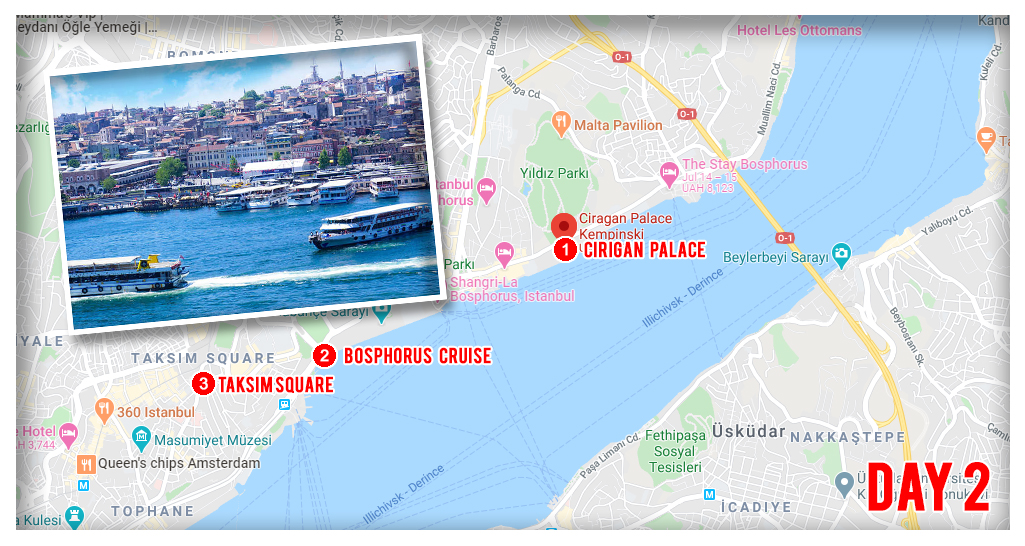 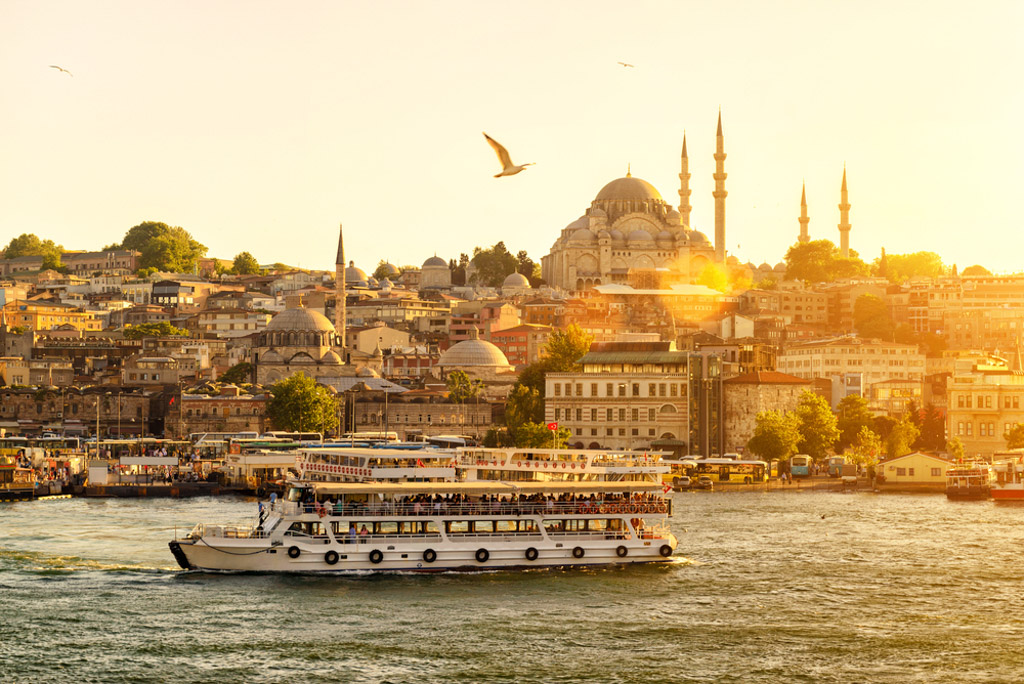 2. Bosphorus Cruise. It’s a rule of thumb for us, that if we’re exploring the place that has a river or a water body, we take a cruise if it’s available. There are many Bosphorus Cruise options near the Ciragan Palace, so you can choose any cruise you like depending on your budget and preferences. If you want to combine cruise with entertainment, we recommend taking this 3-hour ride with full entertainment program, which even includes belly dancing. 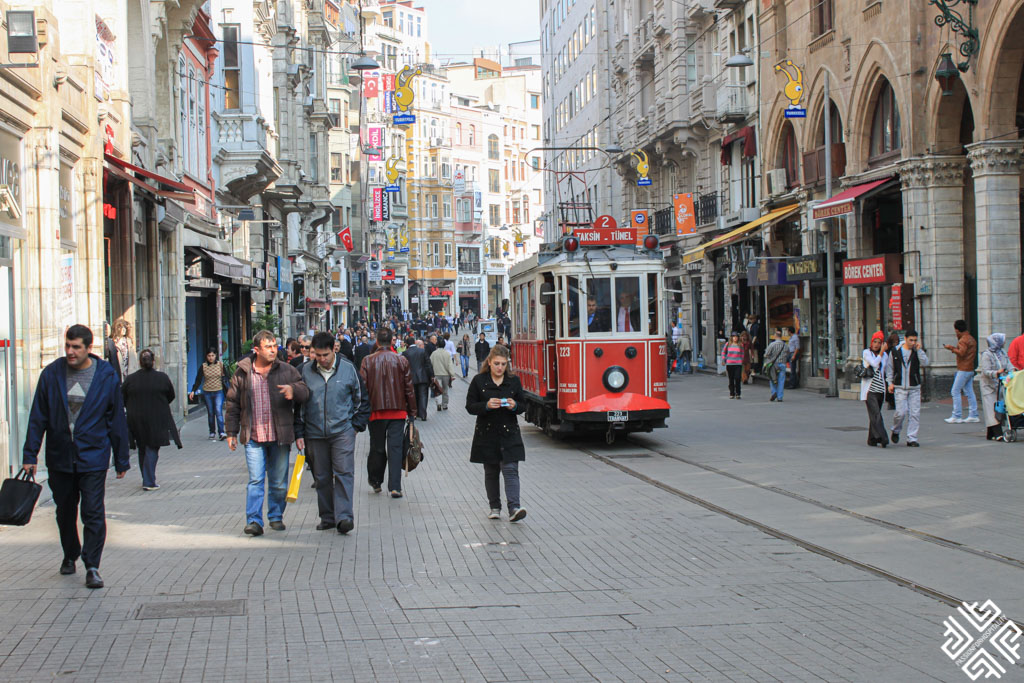 3. Taksim Square. Taksim Square is the modern city center in Istanbul where you can take a walk on Istiklal pedestrian street, take a look the famous Independence Monument, take a ride on the old tram, see the Atatürk Cultural Center and then jump to the metro to get to the Mall of Istanbul.

4. Shopping at Mall of Istanbul. If you’re into shopping, then visiting the Mall of Istanbul is an absolute must. Being one of the most popular shopping centers in the city, it has won numerous awards. 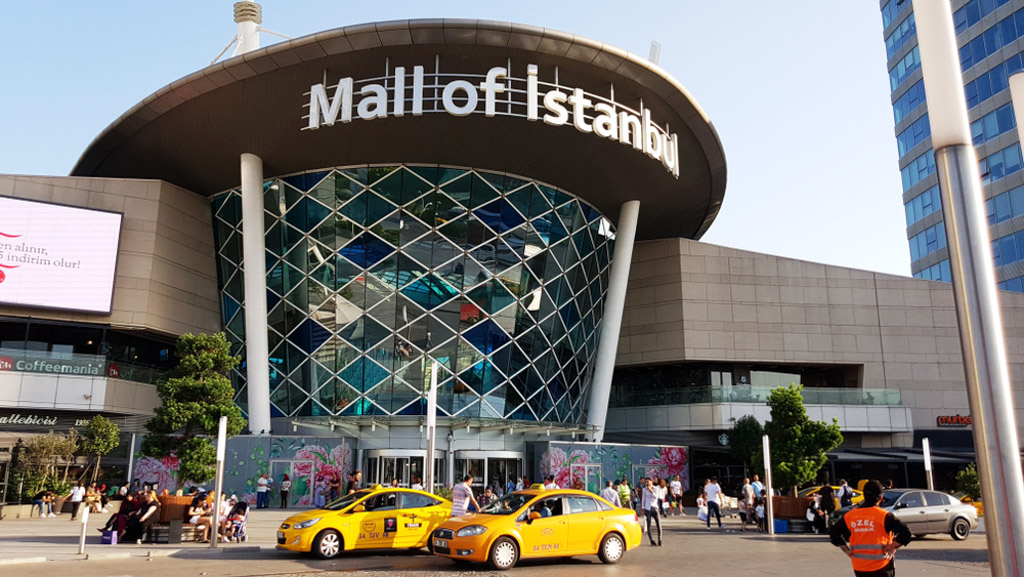 Among others, it won the titles of ‘Most functional shopping center of Turkey’ and ‘The Best Shopping Center Development Project’. It has 5 buildings, 4 floors, and a staggering size of 350,000 square meters with 350 large and small stores. Aside from numerous shopping opportunities, it offers many options for recreation as it houses Europe’s largest indoor amusement park. 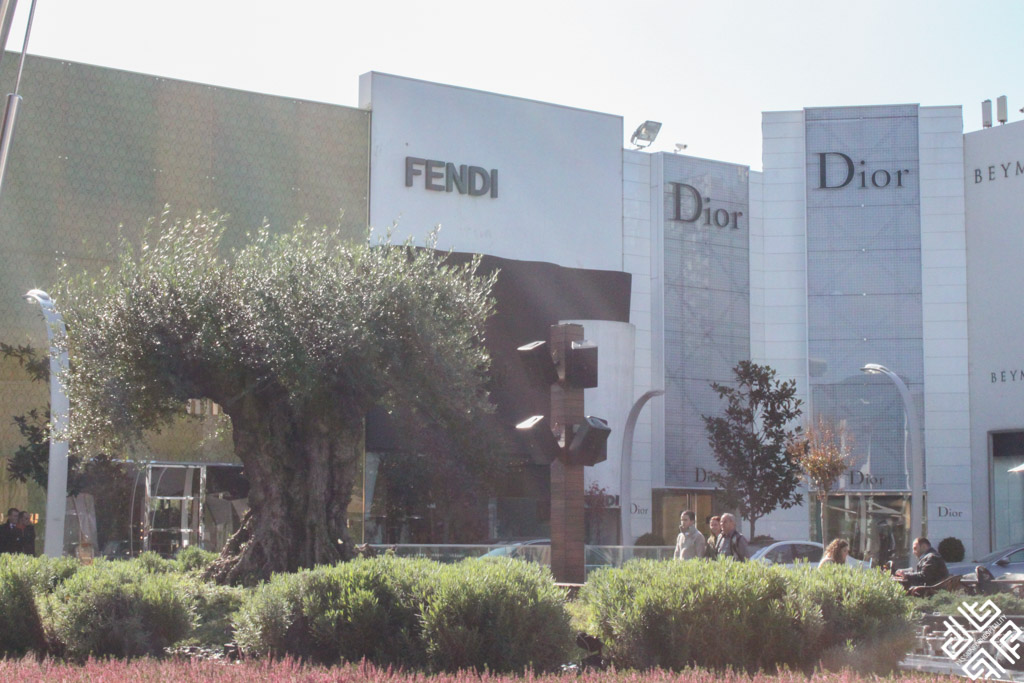 5. Asmali Mescit. After shopping, you can go to Asmali Mescit, which is a very lively street to visit in the evening. During this time of the day, it overflows with life, and it will be a fun experience to just sit in one of the local bars or restaurants and observe the local people. If you don’t plan to sleep, you can visit one of the many nightclubs in the area, because Asmali Mescit is known for its vibrant nightlife. 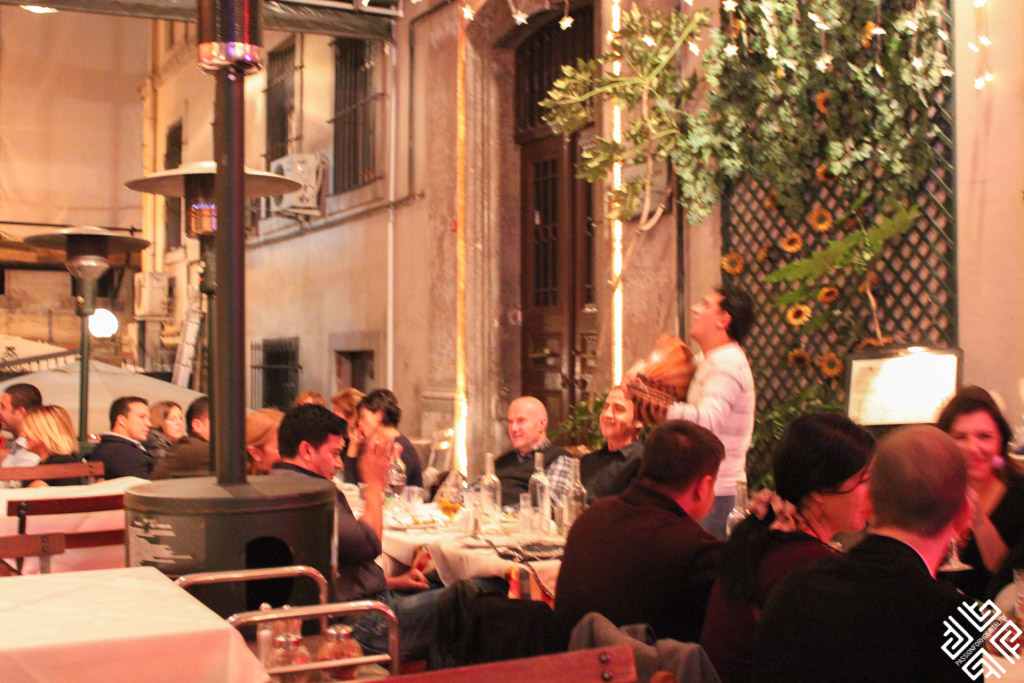 6. Evening Drink at 360 Istanbul. Having a drink and admiring the view on Galata Kulesi (a beautiful medieval stone tower in the Galata/Karaköy quarter of Istanbul) in one of the world’s best sky-high rooftop restaurants is an excellent way to finish your weekend in Istanbul. You may sit there and think, ‘why haven’t I opted-out for 5 days in Istanbul, instead of 2?’ If you have more than a weekend in Istanbul or want to turn away from the beaten tourist track, you can explore these 3 fascinating neighborhoods: 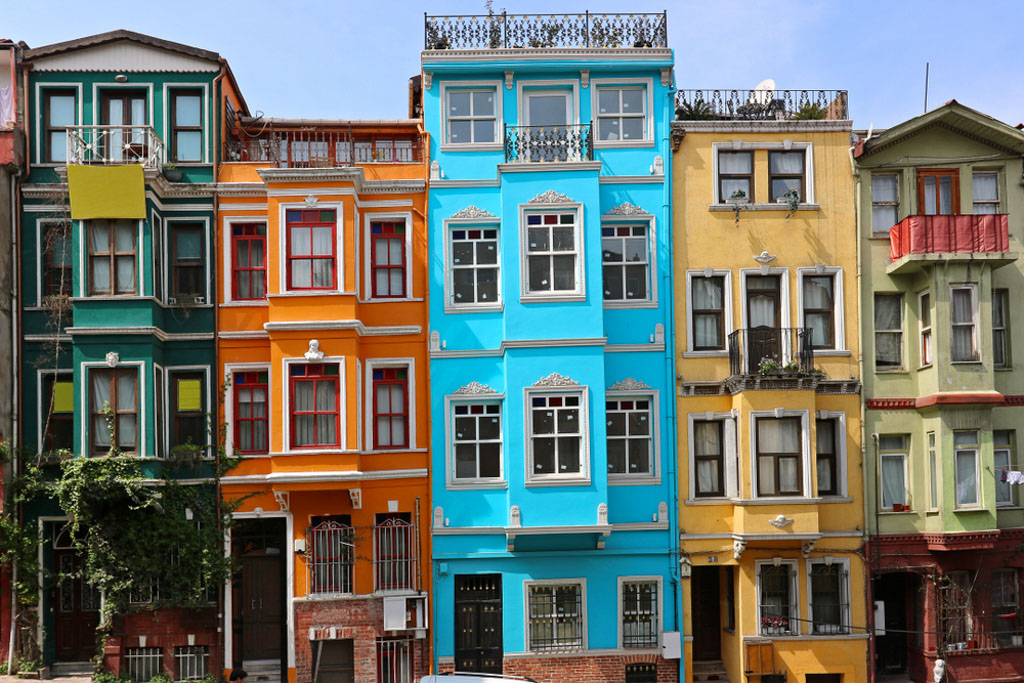 Balat – it’s one of the oldest and most attractive districts in Istanbul. Its atmosphere is so unique that once you step on the narrow streets of Balat, you will feel like you were transferred into another world. Once you’re there, make sure to explore the iconic colorful houses, feel the diverse history of Balat, and do some shopping and food-tasting. 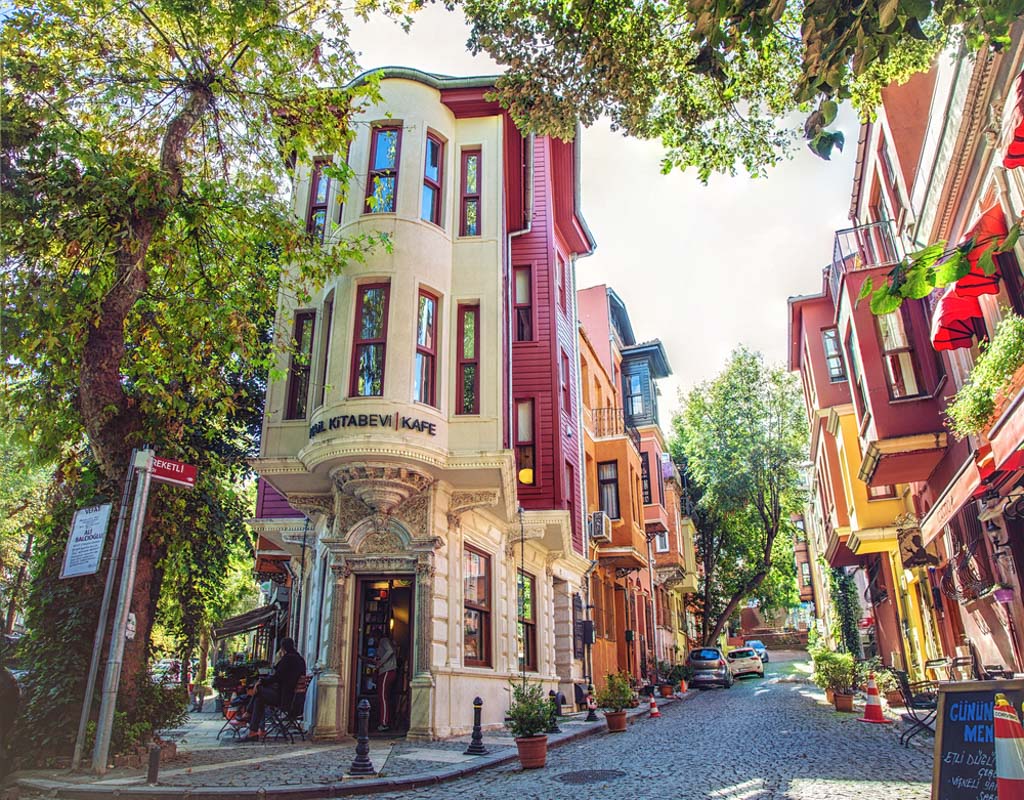 Uskudar – it’s a district for those who want to turn away from touristic routes and see the city’s local culture. While in Uskudar we advise to see the traditional Kuzguncuk houses, learn the legend of Maiden’s Tower, see the ancient mosques, enjoy the breathtaking views from the Camlica Hill and relax in the green parks.
Besiktas – Besiktas is yet another exciting district that allows you to explore local culture better. You can visit the market district and bazar, go to the Dolmabahce Palace, attend art galleries or Turkish Naval Museum of Istanbul or hang out in Ortakoy (the main square) with a jacket potato. But above all, we recommend you to admire the 15 July Martyrs Bridge at sunset. 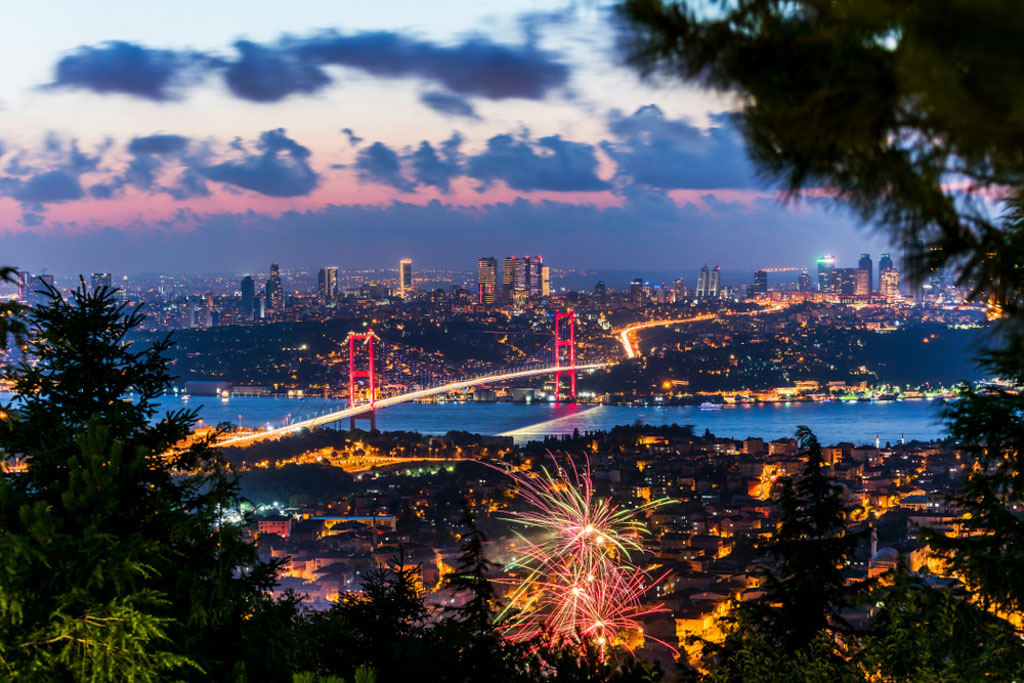 Top 5 Foods to Try in Istanbul 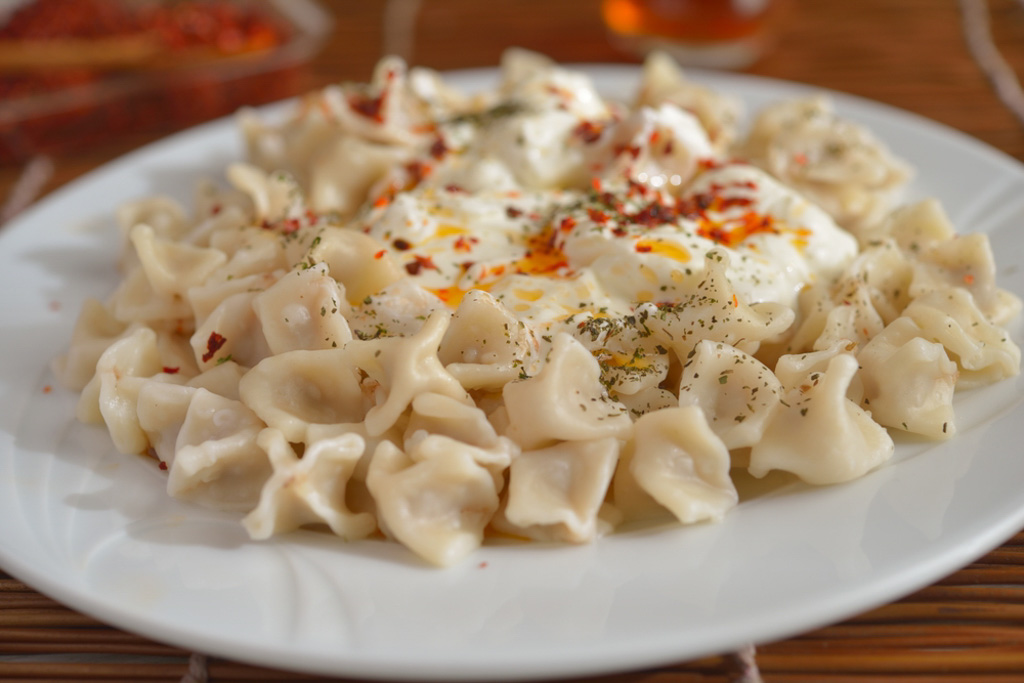 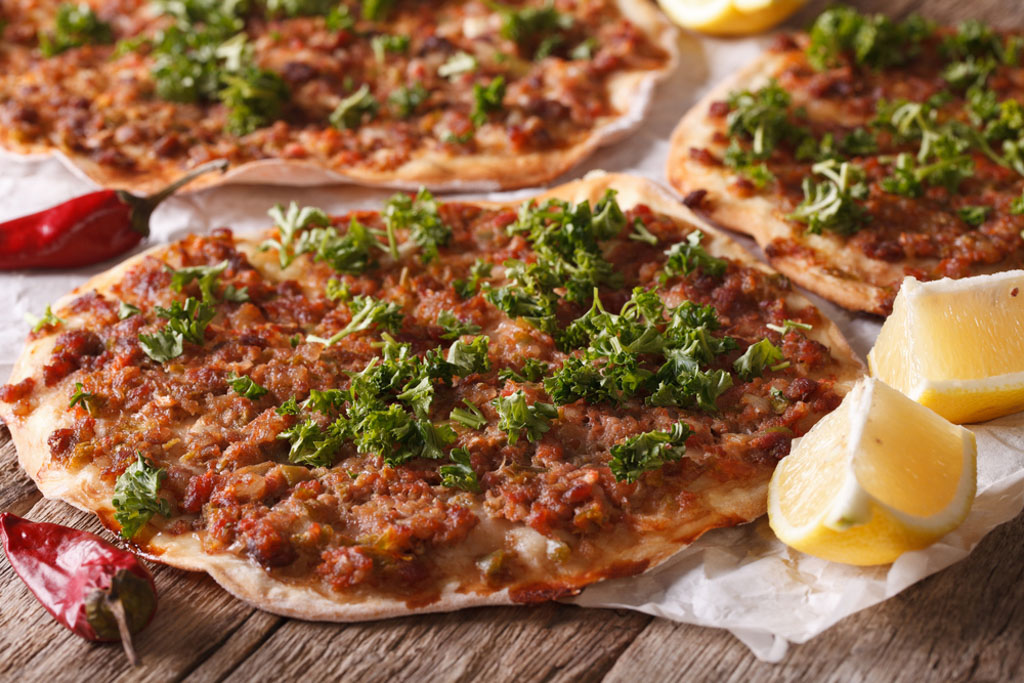 Top Places to Stay in Istanbul

Mustafa Kemal Ataturk once said: ‘On the meeting point of two worlds, the ornament of Turkish homeland, the treasure of Turkish history, the city cherished by the Turkish nation, İstanbul, has its place in the hearts of all citizens.’ Even after visiting Istanbul for a short weekend, it will find a place in your heart too.

Yacht Charter Greece: Our Sailing Experience in the Saronic Islands

How to spend 3 Days in Marrakech: Best...