Once upon a time the small coastal town of Karystos, located on the second largest island of Evia was famous for its ancient quarries and abundant marble production. During the rule of Julius Caesar (60-44 BC) and Augustus, the Karystos marble was regarded as a valuable building material in Rome. Referred to as the Cipollino marble translating as the onion stone, it was widely used by the Greeks and Romans in the construction of monolithic pillars as well as in paving floors and walls. Today, many of these ancient quarries can be accessed on foot where visitors can observe the traces of an era of abundant marble trade. 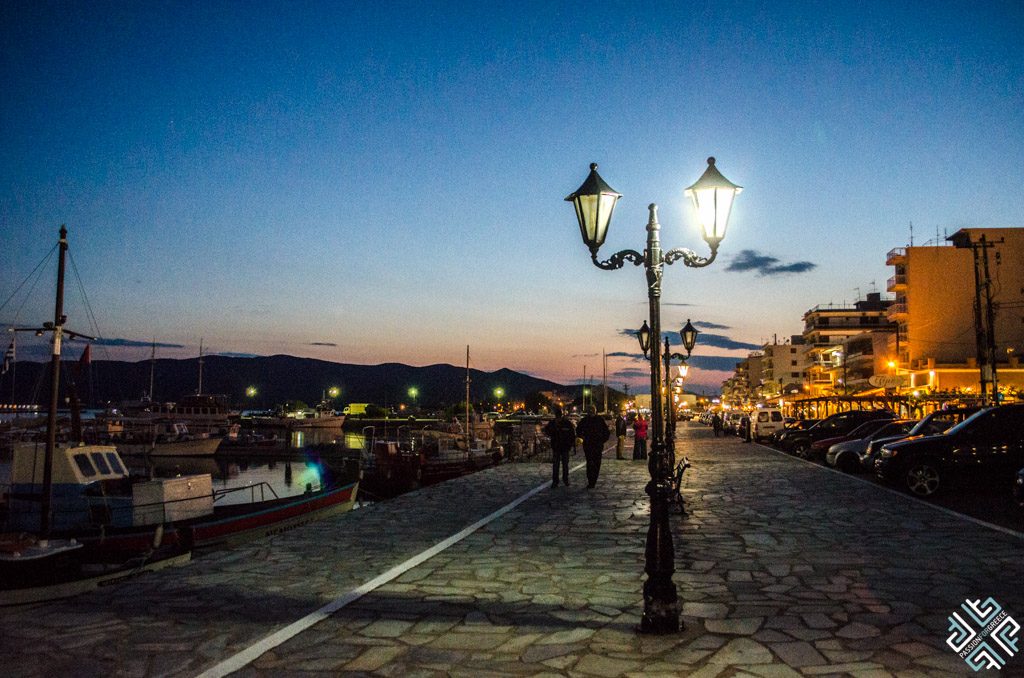 The rich diversity of the Karystos landscape combines kilometres of remarkable coastline and majestic mountains, making it a wonderful destination to visit at all times of year. Just a short ferry ride from Athens (one hour), you can get to Karystos from Rafina. Here’s our weekend guide to Karystos, South Evia.

A Weekend Guide to Karystos: What to See and Do

A brief history of Karystos

Following centuries of conquests, numerous rulers and influences Karystos adapted to all who stepped foot on its fertile land. Small in size but rather rich in character, Karystos is one of those places which will take you by surprise. 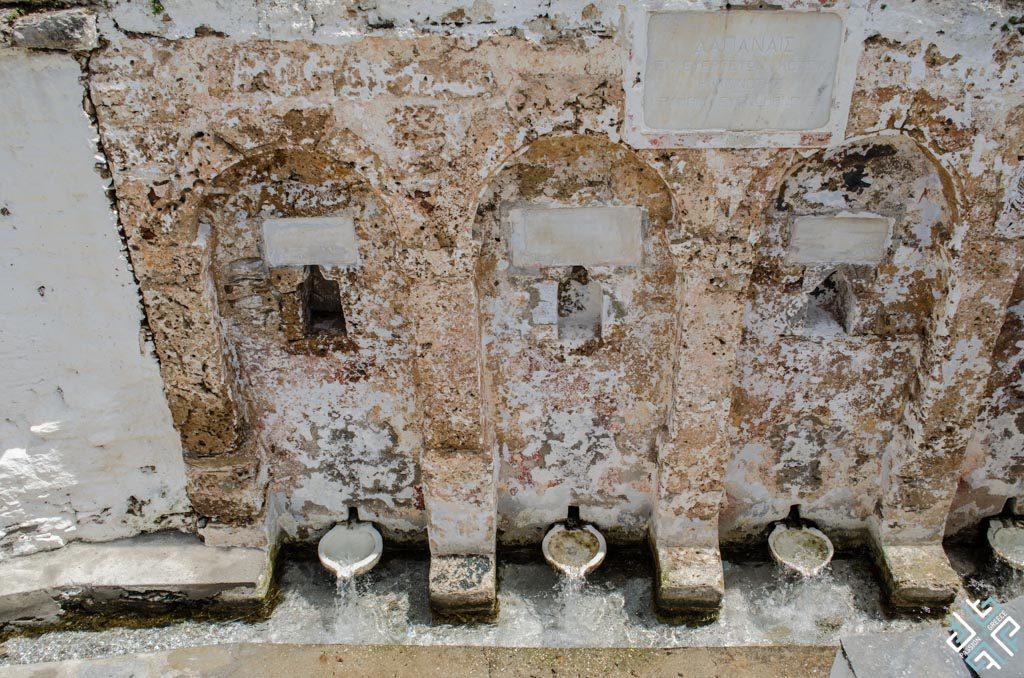 As Fani Stavroulaki, a well respected archaeologist in Karystos explained — the town got its name based on the following three versions: firstly it was named after Prince Karystos, the son of the Centaurs Chiron, who in Greek mythology was famous for his wisdom and knowledge of medicine. Another version is that Karystos got its name from the word Karya which means kastana (Greek word for chestnuts). This is evident from the vast chestnut forest (Kastanologos) which is dotted with hundreds of chestnut trees with enormous trunks. The third version of the name is kirito which translates as preaching and is evident in the city’s emblem which is a rooster. 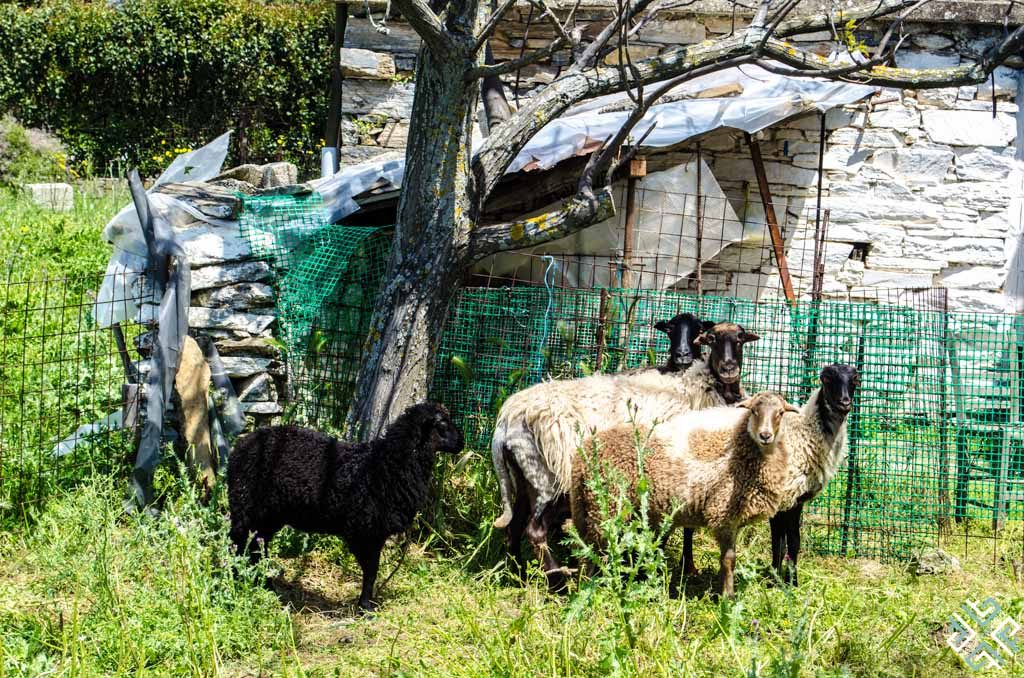 The town of Karystos is characterised by a distinct neoclassical charm and all thanks to the immaculate town planning which was commissioned to the Bavarian engineer Mirbach, by King Otto. 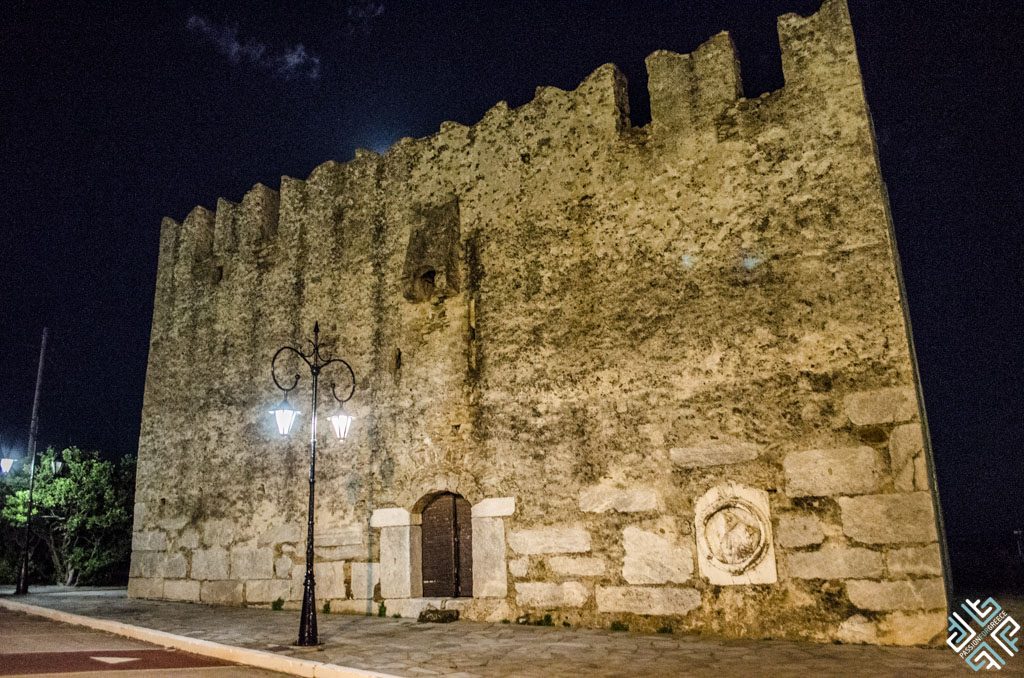 One of the highlights of the Karystos promenade is the 13th century Venetian tower which is a two-storied building, that was built using marble and limestone in a hexagonal horseshoe shape. It’s Arabic name translates as the seaside fortress and it was used to protect the city from unwanted intruders. During the summer months it hosts numerous cultural events.

Perched on the foothills of Mt Ochi, stands the crown jewel of Karystos — the Castello Rosso offering panoramic views of Karystos just a short 4 kilometres drive from the town centre. 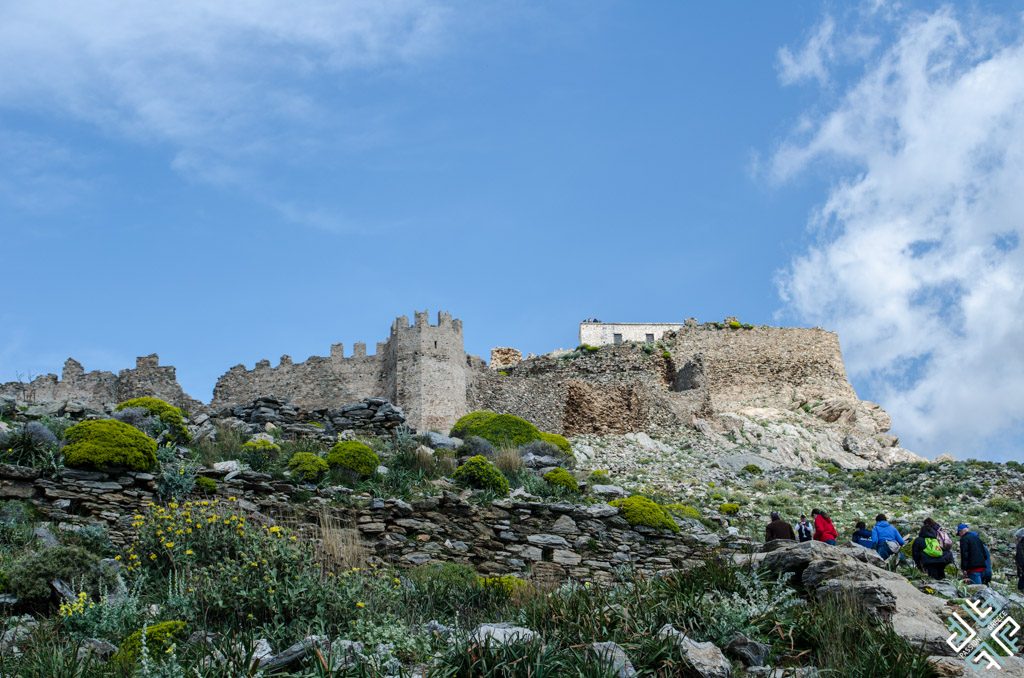 Traces of the first fortification date back to 1030 AD, which was constructed by the Byzantines to help to protect the city from pirate raids and other intruders. The medieval castle that stands here today is said to have been constructed by the baron Ravano dalle Carceri, from 1209-1216. 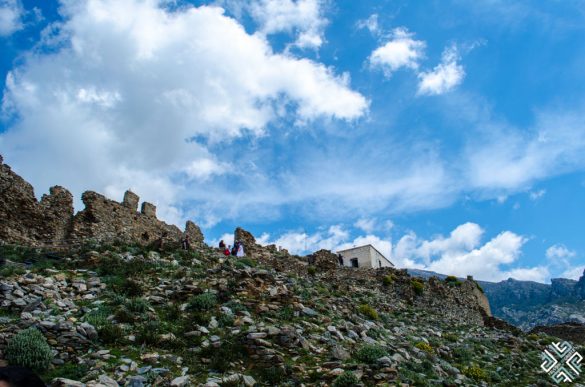 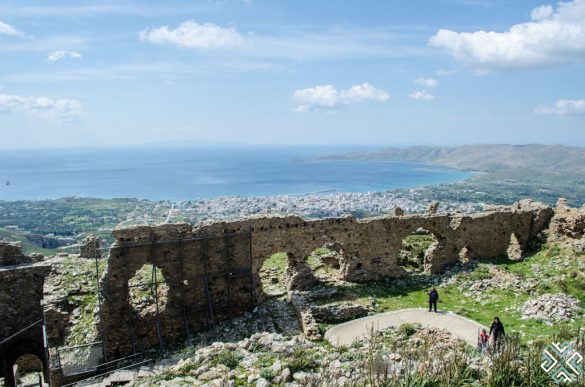 The castle was initially captured by the Franks, then moved to the Venetians and later was fortified by the Turks during the Ottoman rule (1470-1830). The entrance to the castle is free, the hike up the hill is fairly easy and there is a church dedicated to Prophet Ilias.

Just when you think that you have witnessed all sorts of landscapes, Greece unveils something new, wild and captivating.

At an altitude of approximately 1200 meters above sea level on the Mt Ochi lies the chestnut forest of Kastanologos, famous for the perennial chestnut trees. Today the ancient forest covers 250 hectares of land. Ranked as a Region of Particular Natural Beauty, Kastanologos is the last genuine chestnut forest in southern Evia.

Some of the youngest trees found here are 180 years old and the oldest are somewhat 380 years old. Walking inside the forest we could feel the crisp air, and the deserted landscape somehow felt right out of a dramatic movie scene — but apparently when the forest is blooming the animals find their refuge and food in this place. The chestnuts are consumed by animals.

One of Evia’s archeological wonders are the 25 enormous limestone constructions with pyramid shaped roofs which stand on steep locations. It is said that these houses were ancient sanctuaries of one of the three gods — Zeus, Hera or Heracles.  The most impressive of all is found on Mt Ochi, at an altitude of 1389 metres, rising above the town of Karystos. During an excavation in 1959 pottery and petsherds were found on the site. These are now available on display at the Archaeological Museum of Karystos.

The Mt Ochi is home to four settlements, as you make your way towards Platanistos Village (approximately 30 minuets from Karystos town) you will pass by Epanochori of Platanos where you can admire the beautiful waterfall. 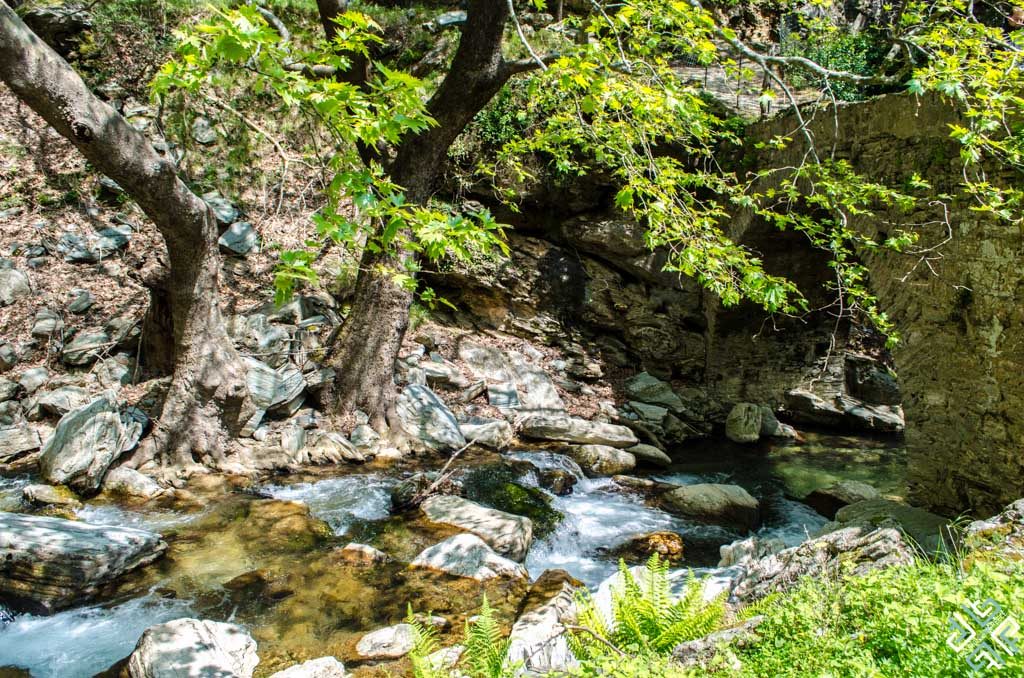 The area is wonderful for hiking, the trail starts from the waterfall and leads all the way to the 1870s stone bridge. 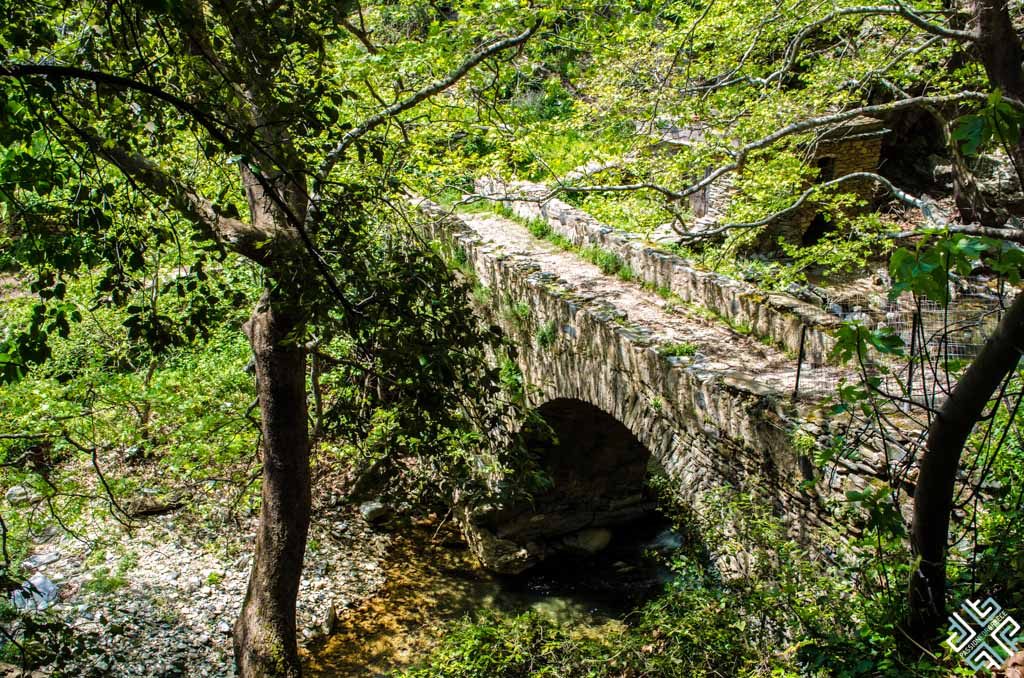 The Platanistos Village was built in the 14th century by the villagers of Kastri who sought a refuge in the mountains to escape from the pirates. Until 1950s the village had 1062 inhabitants which today are only 200. They are mainly involved in livestock and beekeeping. 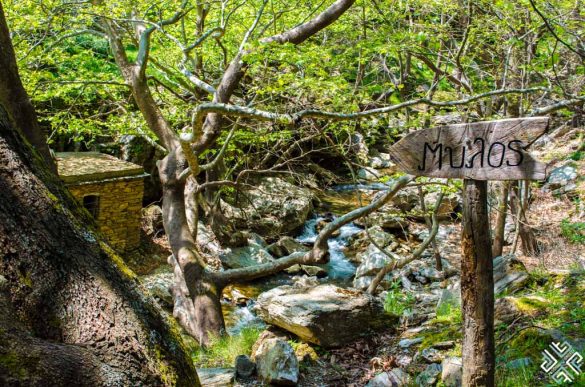 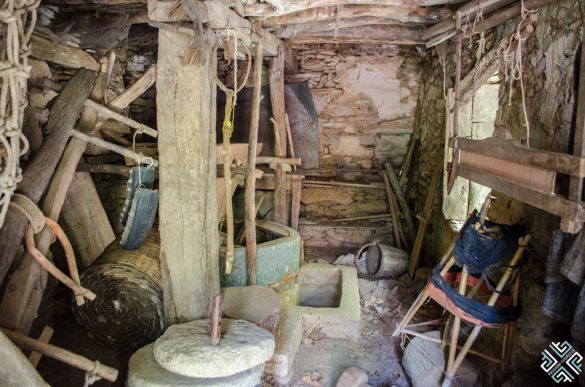 The animals enjoy free grazing and the region is home to over 870 types of herbs and plants that add wonderful aromatic flavor to the meats and milk products. The region is famous for its wild goat which is called kokkini, that produces excellent tender meat and good quality milk (90% of the produce is organic). 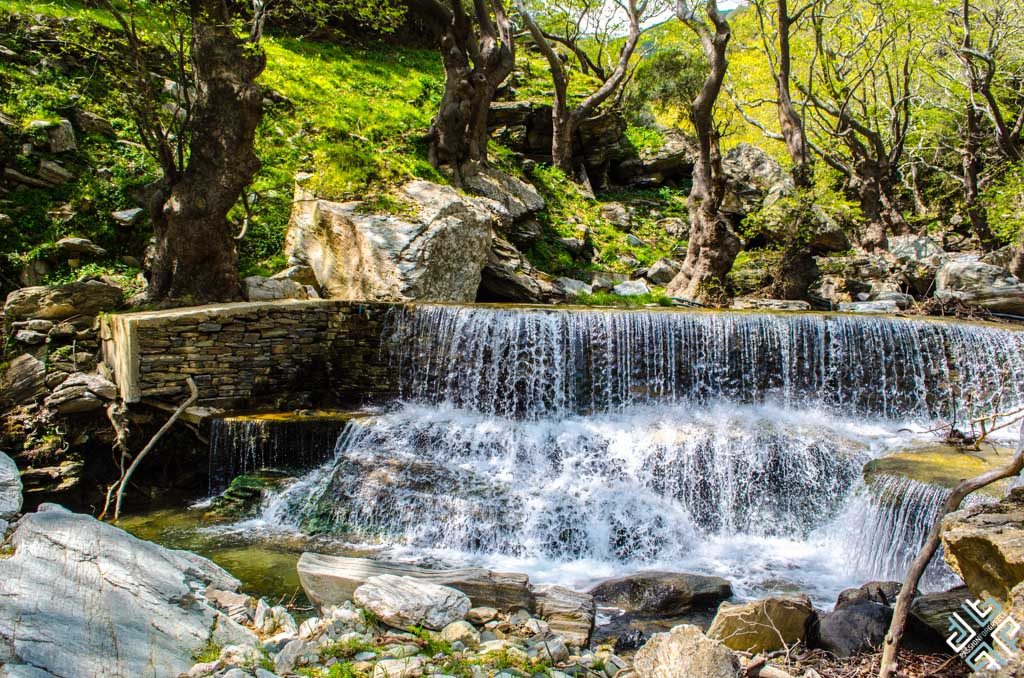 There are two tavernas in the village and one canteen right next to the river. Several religious feasts are celebrated here throughout the year. A special feast is held during Easter and also another one in mid August followed by a river party that attracts locals and visitors alike. 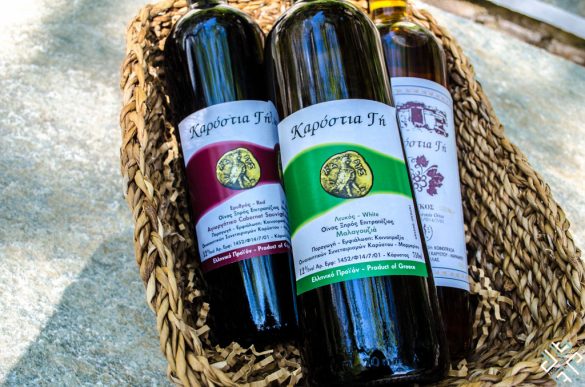 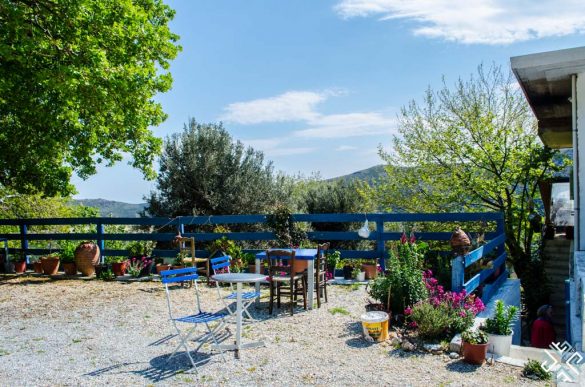 The region also produces local wine called Karistia Gi, the white wine is made out of Savatiano, Malagouzia, Agiorgitko and Assyrtiko grape varieties. If you enjoy sweet dessert wines then you should try the local Roditis wine. Karystos is also famous for its excellent honey. 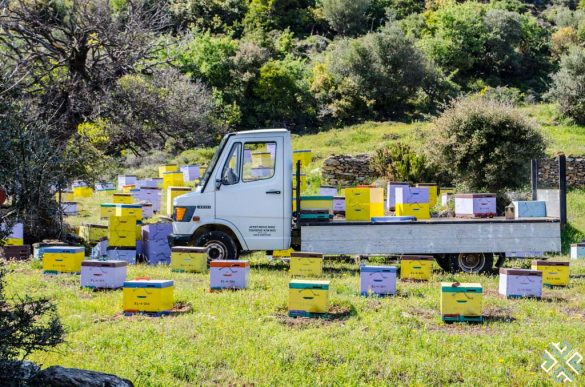 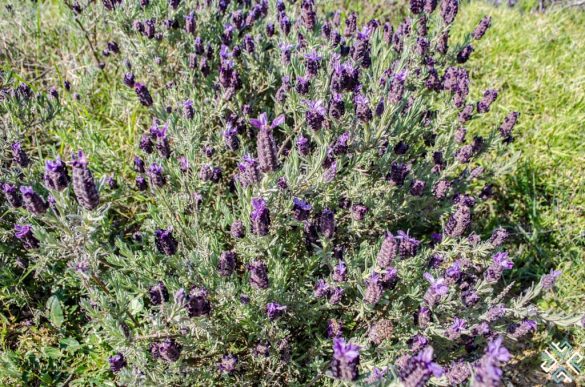 The Whistled Language of Karystos

One of the most remarkable traditions which you will find in this part of Greece is the whistled language which is almost becoming extinct. The tiny village of Antia, is home to the last remaining inhabitants who use this rare language till this day.

One of the most remarkable traditions which you will find in #Karystos is the whistled language which is almost becoming extinct. The tiny village of Antia, is home to the last remaining inhabitants who use this rare language till this day. “This is a language that covered distance”, explained Giannis Apostolou, a local who is one of the last 6 people who is still able to communicate in this special whistling language. “It is the iPhone of the modern world” he said jokingly. Find out more in our latest post! ?? #passionforgreece

“This is a language that covered distance”, explained Giannis Apostolou, a local who is one of the last 6 people who is still able to communicate in this special whistling language. “It is the iPhone of the modern world” he said jokingly. He rolled his tongue and greeted us in a fluted melody which was very impressive. Villagers would use sfyria — Greek word for whistle as a means to communicate and have the message travel for kilometres. The signal was used to warn villagers against danger and pirate invasions.

Where to Eat in Karystos 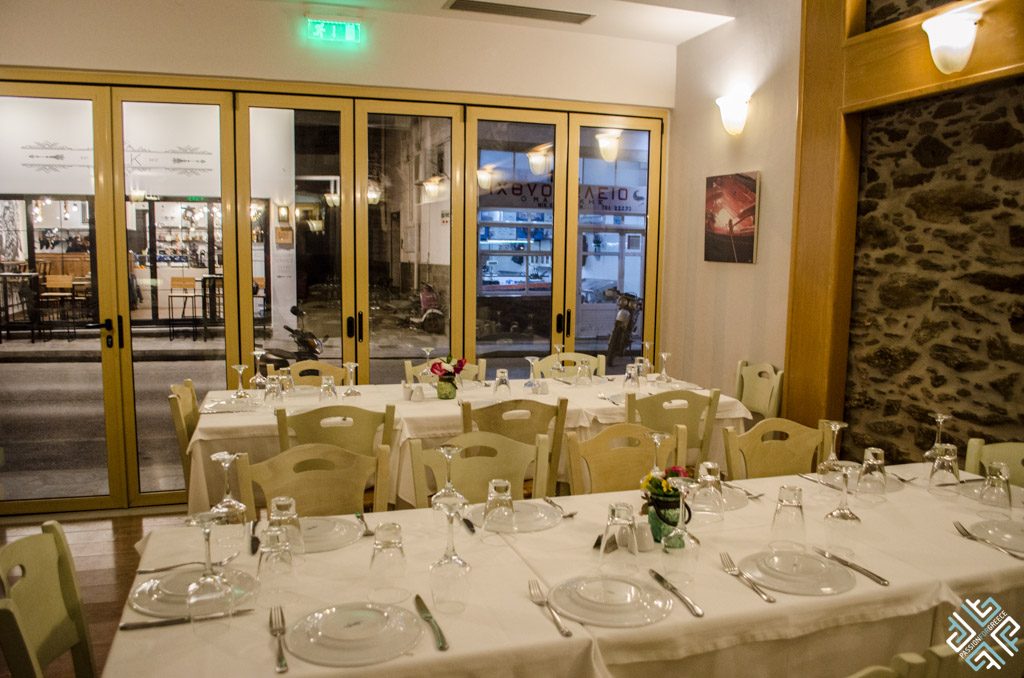 The Karystos harbor is lined with numerous tavernas serving local delights. During our weekend trip to Karystos we enjoyed a delightful dinner at Gefsiplous (Th.Kotsika 3, tel: 22240 25697) where the menu is supervised by the famous Greek Chef Giannis Baxevanis who focuses on highlighting the uniqueness of the local Greek dishes, using fresh, locally sourced produce. 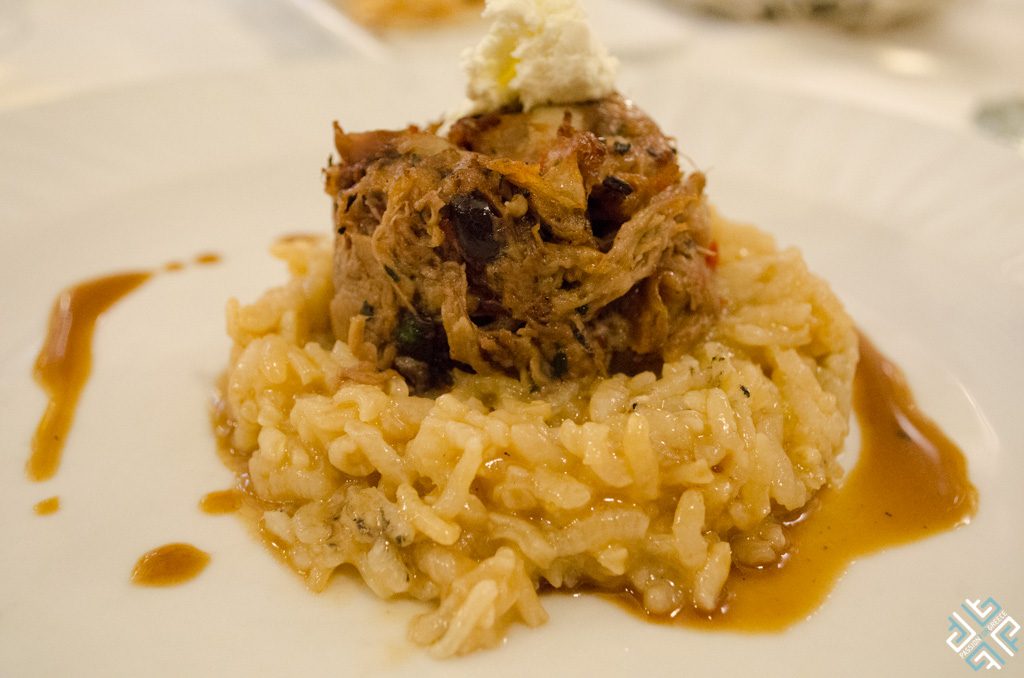 The region is famous for fresh seafood dishes and goat. A great selection of both was present at the table, paired with chilled local white wine. 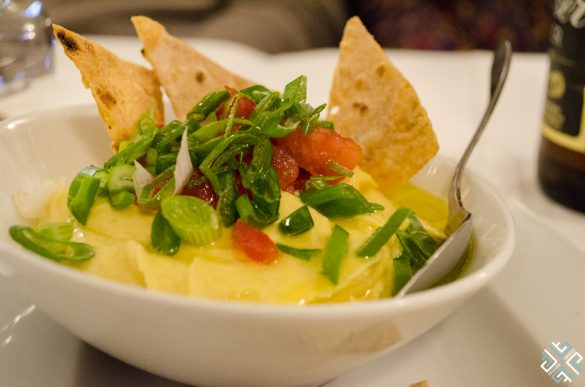 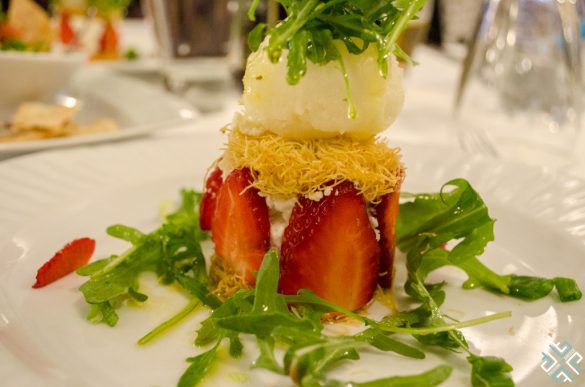 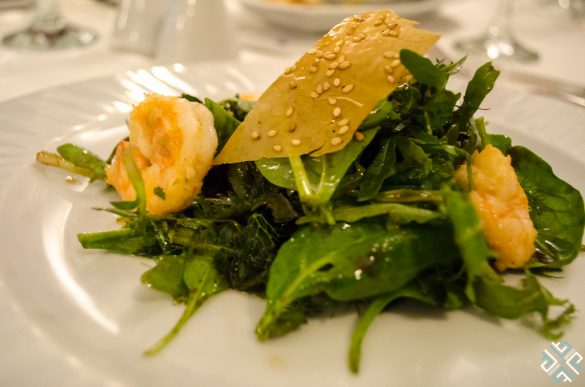 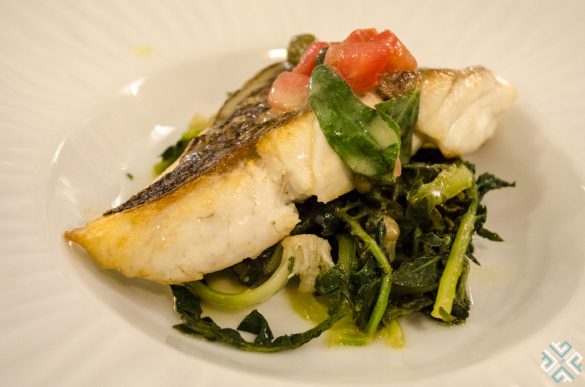 For lunch we visited the Honi family run restaurant which is located just on the outskirts of Karystos town. We savoured a selection of salads, pies, seafood pasta and the famous local goat. 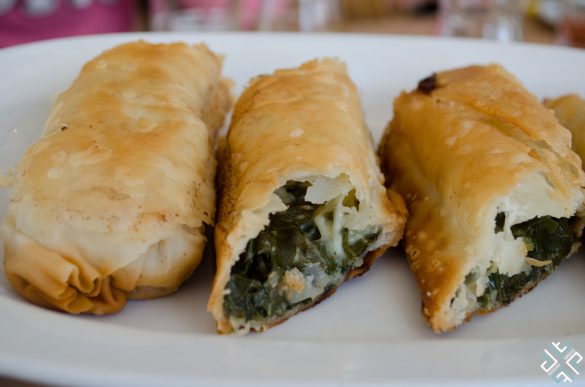 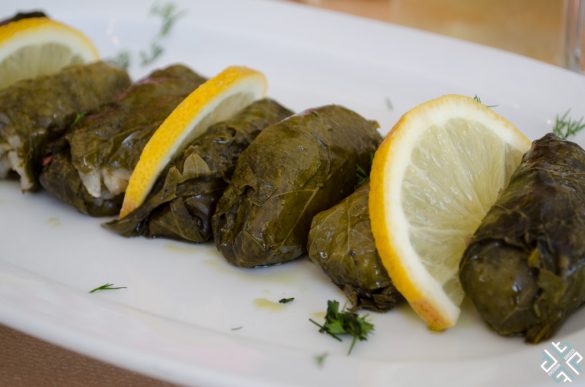 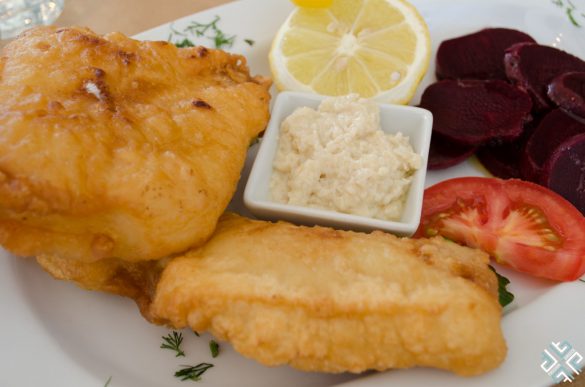 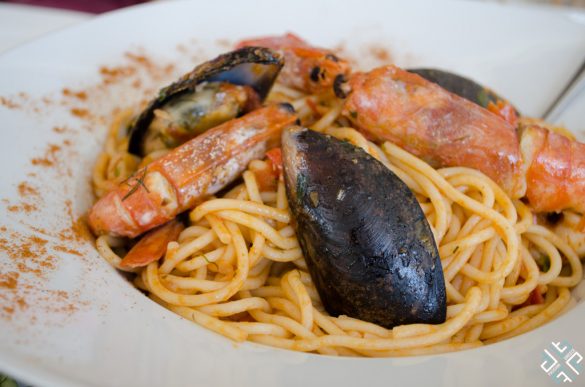 Where to Stay in Karystos

During our weekend trip to Karystos we stayed at the Karystion hotel, which is centrally located on the beachfront of Karystos town, a short walking distance from the harbor. 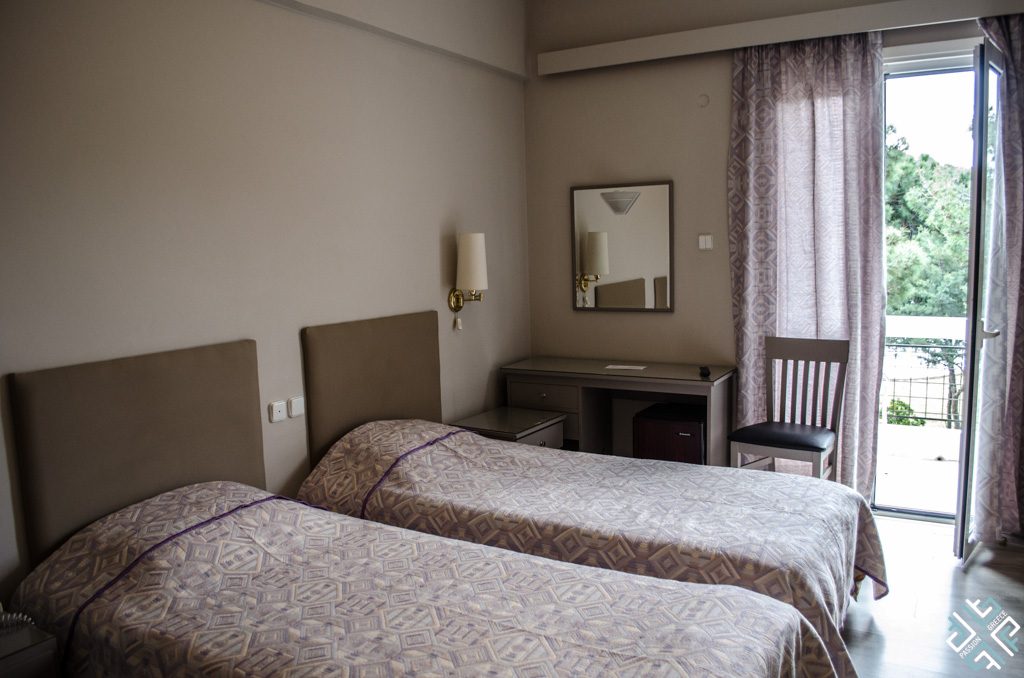 A Weekend Guide to Nafpaktos: 3 Days in Nafpaktos Greece

Guide to Best Beaches in Mykonos