The picturesque mountain village of Metsovo is one of Epirus’ best kept secrets. Offering bountiful experiences to its visitors, this all year round destination is often called the Switzerland of Greece. From spectacular natural beauty, to authentic traditional character, ski-slopes and wine culture, Metsovo and its inhabitants will charm you with its tasteful charm.  Here are our reasons to visit Metsovo, Greece. 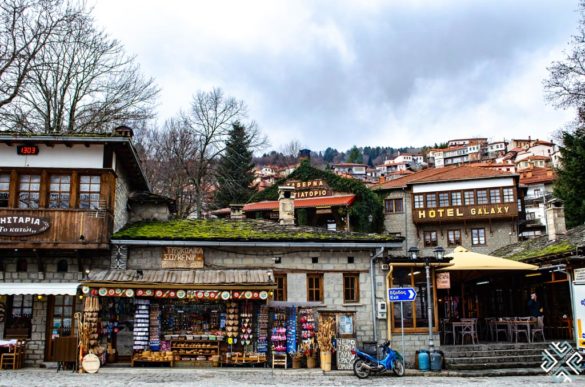 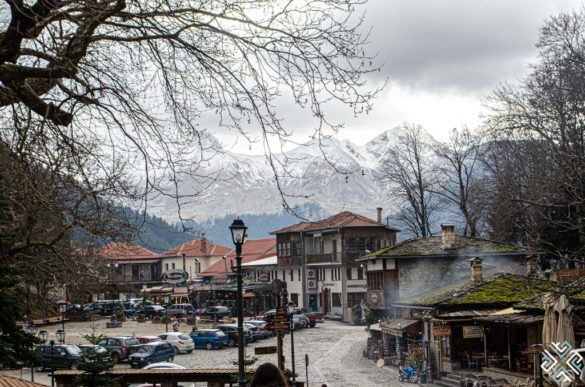 7 reasons to visit Metsovo in Greece 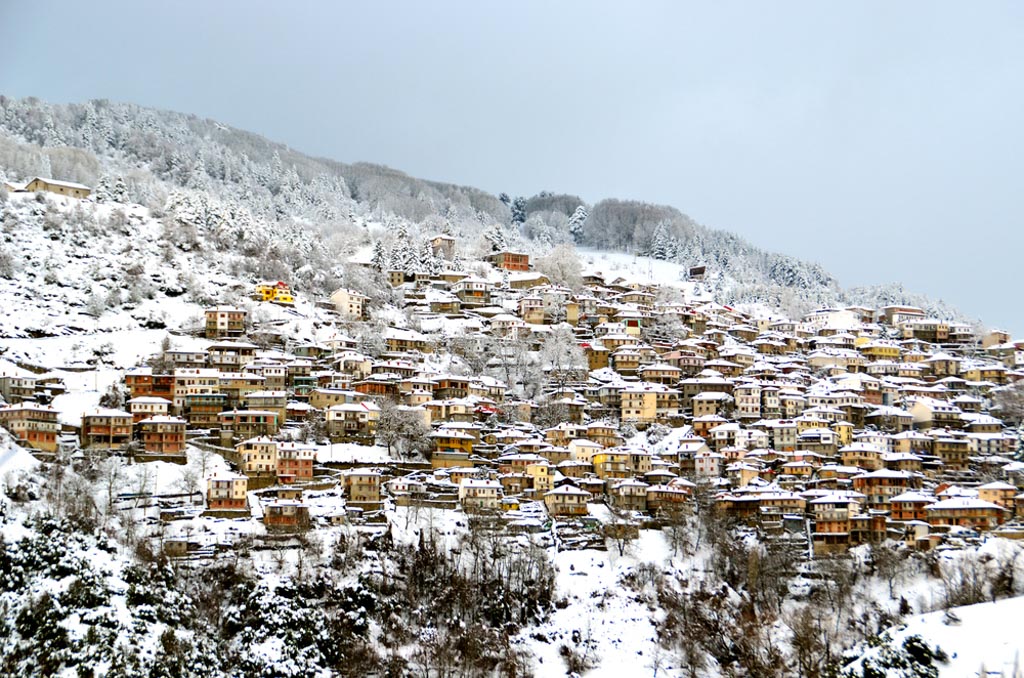 The divinely preserved traditional character of Metsovo must be attributed to the wonderful locals who have a great passion for their age-old history. In the heart of Metsovo there are two spectacular museums, the Averoff Museum of Neohellenic Art and the Folk Art Museum.

Both museums have been established by a prominent figure in the history and development of Metsovo, Evangelos Averoff-Tossizza who was Minister of Foreign Affairs from 1956 to 1963. A man of great wisdom and intellect he had a great passion for culture, arts and tradition. Throughout his life he had a special bond with his town Metsovo, this is why today many of the cultural attractions carry his name. 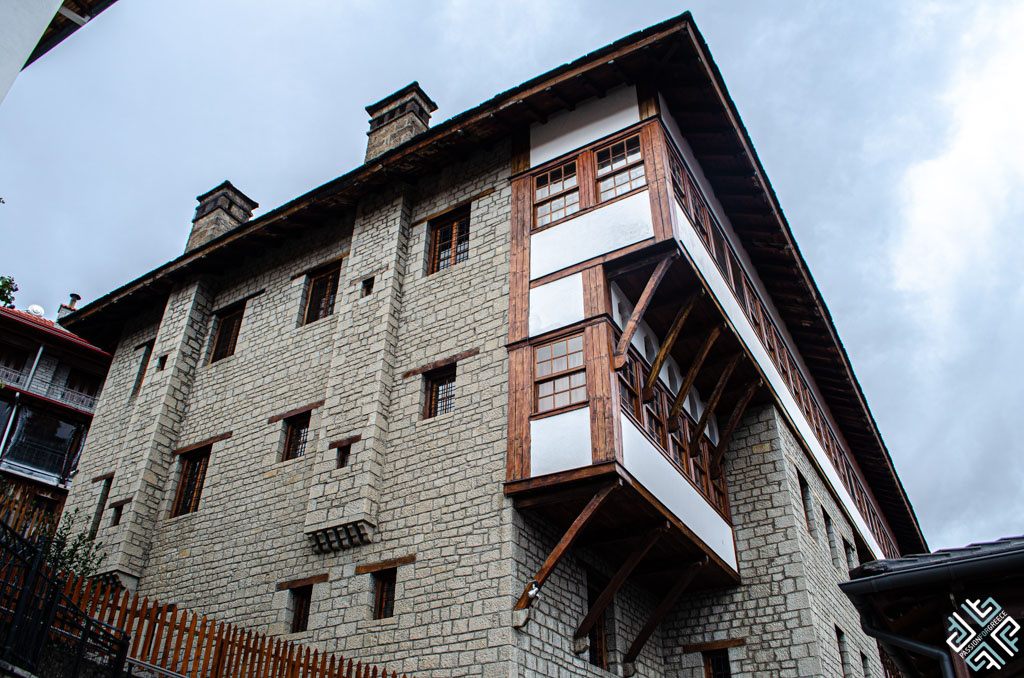 He was also the driving force behind the Baron Mihail Tossizza Foundation which contributed greatly to the prosperity of Metsovo. Baron Mihail Tossizza (1885–1950), was the grandson of one of the youngest brothers of National Benefactor of Greece, Michael Tossizza who had moved to Italy at the beginning of the 19th century. Baron Mihail Tossizza managed his family’s banking business in Paris, and later on lived in Lausanne, Switzerland. Over the course of the years he did not have any ties to Greece, however thanks to the tremendous efforts of Evangelos Averoff-Tossizza who managed to persuade him to establish a foundation to help his homeland. Thanks to the funds of the foundation, more than 100 schools were constructed in the Ioannina prefecture, as well as  a model cheese-making plant, a woodworking factory, a ski resort, and a retail outlet for regional handicrafts.

Evangelos Averoff-Tossizza Foundation had donated a valuable collection of 200 works of art by 19th and 20th century Greek artists to the Averoff Museum of Neohellenic Art which he inaugurated on 27 August 1988. Nowadays apart from the permanent collections, the museum organizes temporary exhibitions and events throughout the year. 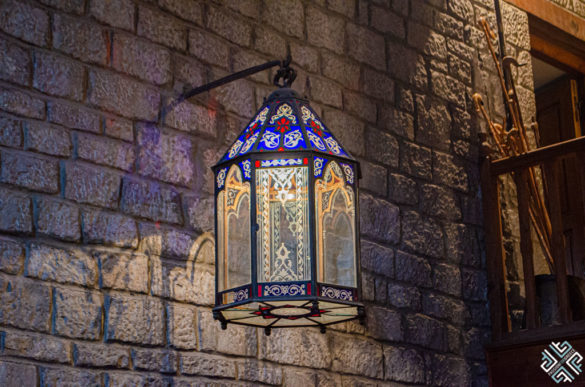 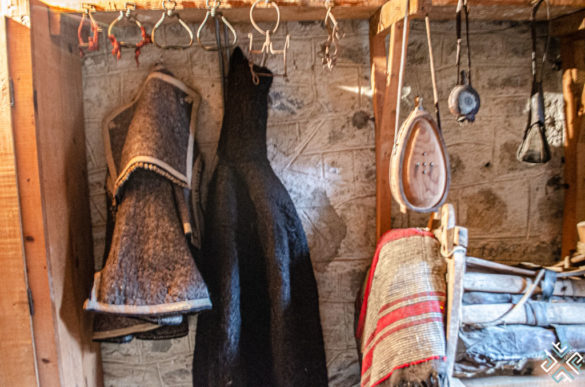 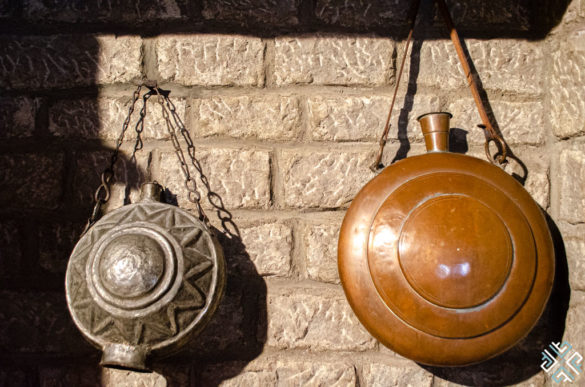 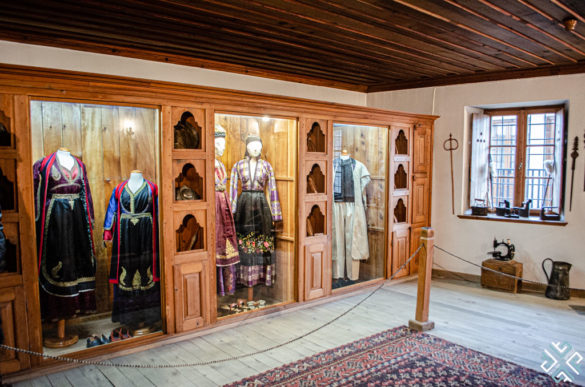 The Folk Art Museum is housed in the 3-storey Tossizza mansion which was built in 1661 and renovated in 1954. Here visitors can experience how the way of life was in Metsovo over the centuries, displaying a beautiful collection of local costumes, carpets, household supplies and furniture, an impressive collection of icons and silverware. 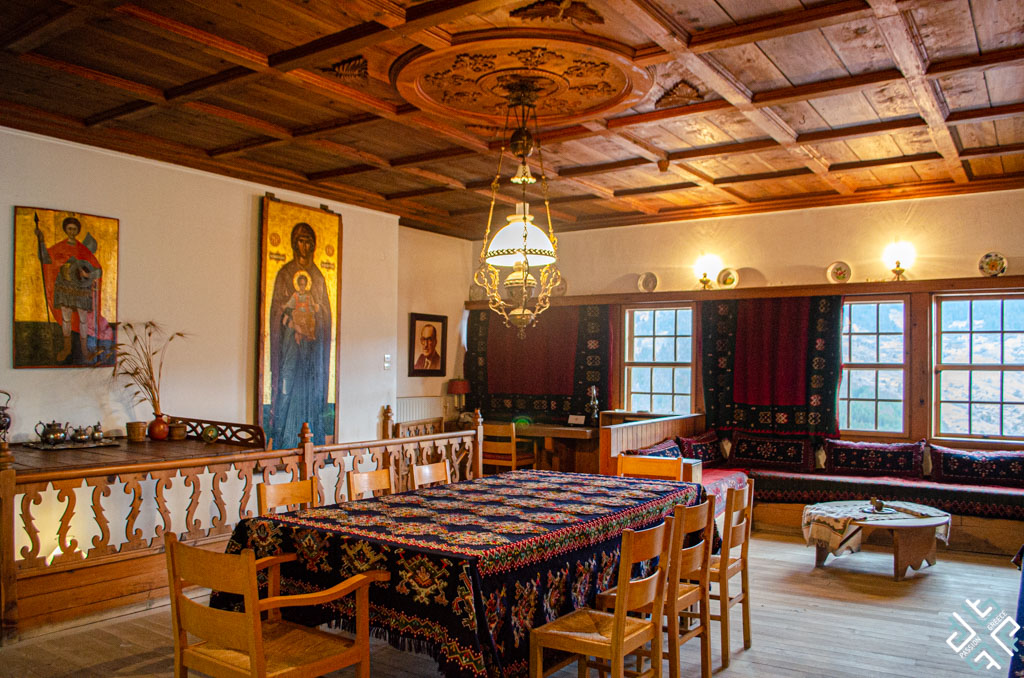 On the top floor visitors will get a glimpse of  Evangelos Averoff-Tossizza’s office and his items which were left to lie as he had once left them.

The wine cultivation blossomed in the region thanks to the efforts and vision of Evangelos Averoff-Tossizza. In the late 1950s the late visionary planted his first Cabernet Sauvignon vines in Greece, right here on the abandoned slopes of Pindus mountains. 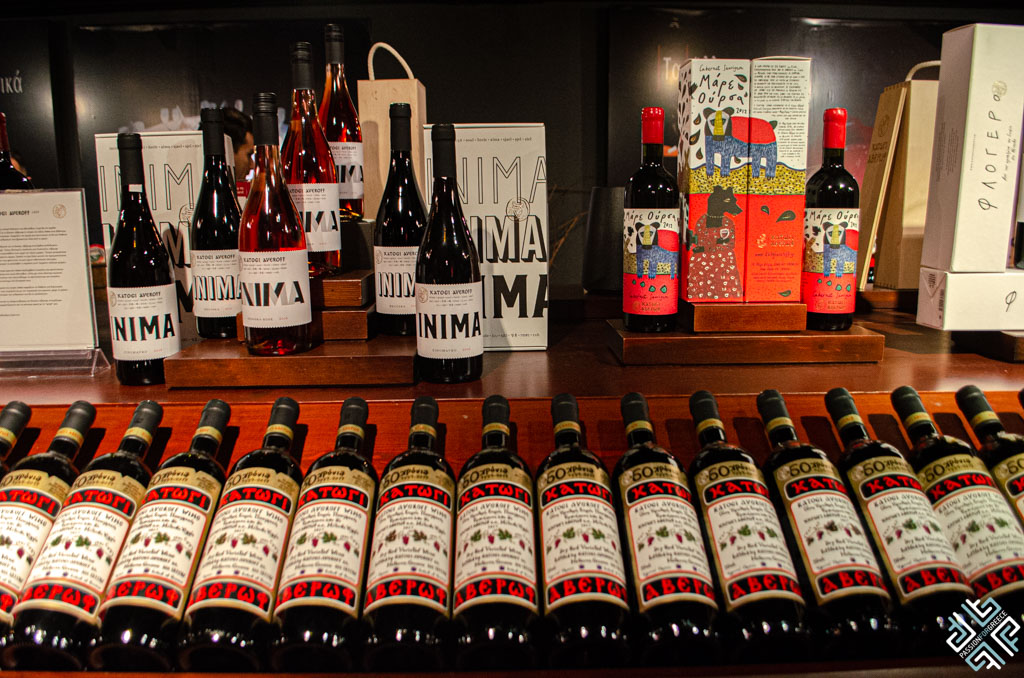 His first wine label read “Vines of France on the mountains of Greece”. Until this day the vision is kept alive, as this boutique winery is managed by Evangelos Averoff’s grandson, Alexander Ioannou who is focused on reviving the indigedous grape varieties. 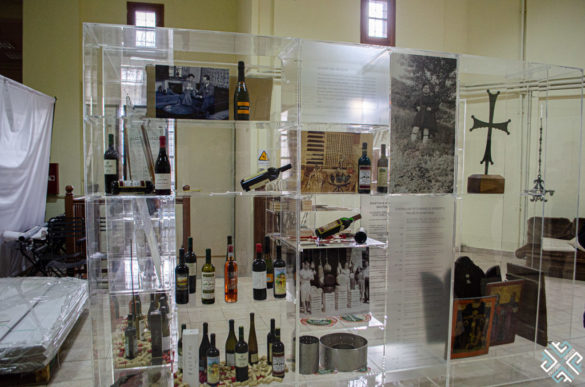 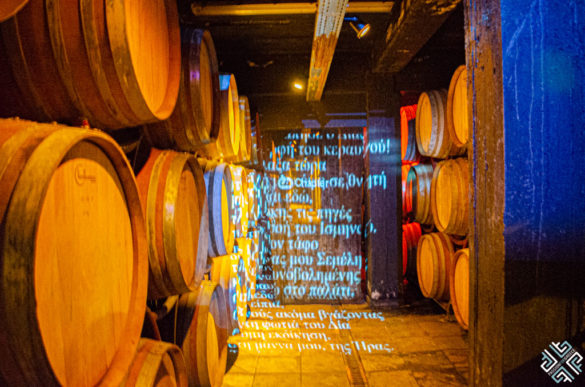 Visitors are welcome to enjoy a guided winery-tour where they can admire the barrel room of over 1200 oak barrels, watch interactive videos that show the wine making process and end their tour with tasting of the fine Katogi Averoff wines. 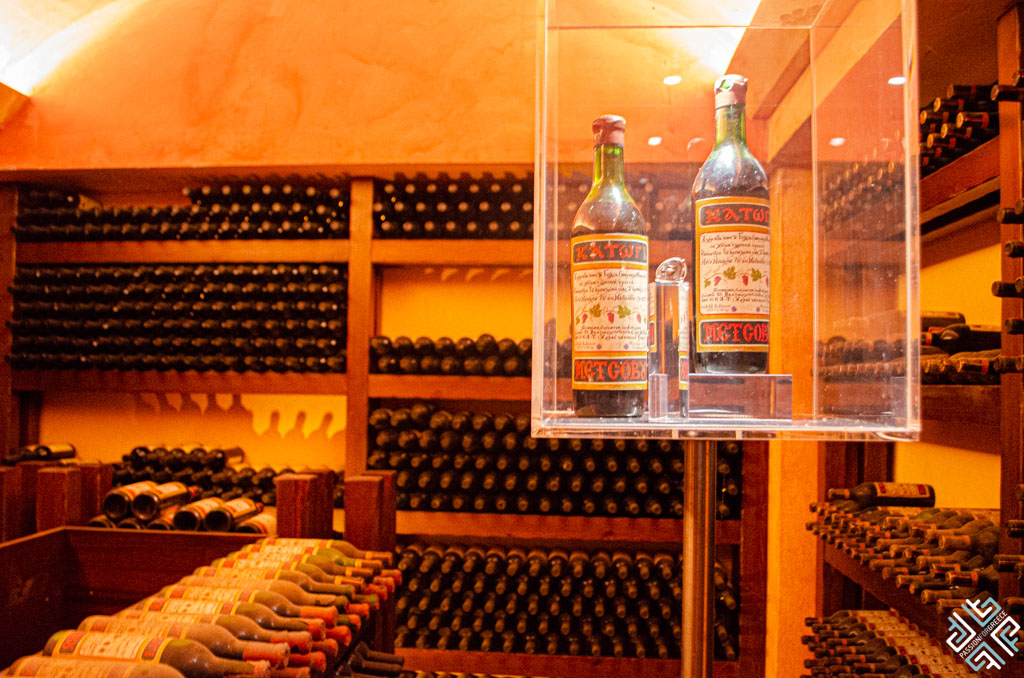 The winery is open daily 10am – 4pm. The duration of the tour is 30 minutes and the last tour starts at 3pm. For wine tasting, please book your visit at least one day in advance.

Cheese production is one of Metsovo’s main industries. Metsovone, a semi-hard smoked cheese produced in the region has been under the PDO (Protected Designation of Origin) since 1996. Made from a mixture of cow’s and goat’s milk it is left to age for three months after which it is exposed to smoke of burning grass and herbs which burn naturally for 12 days. This process gives the cheese a fine yellow color and distinctive taste. 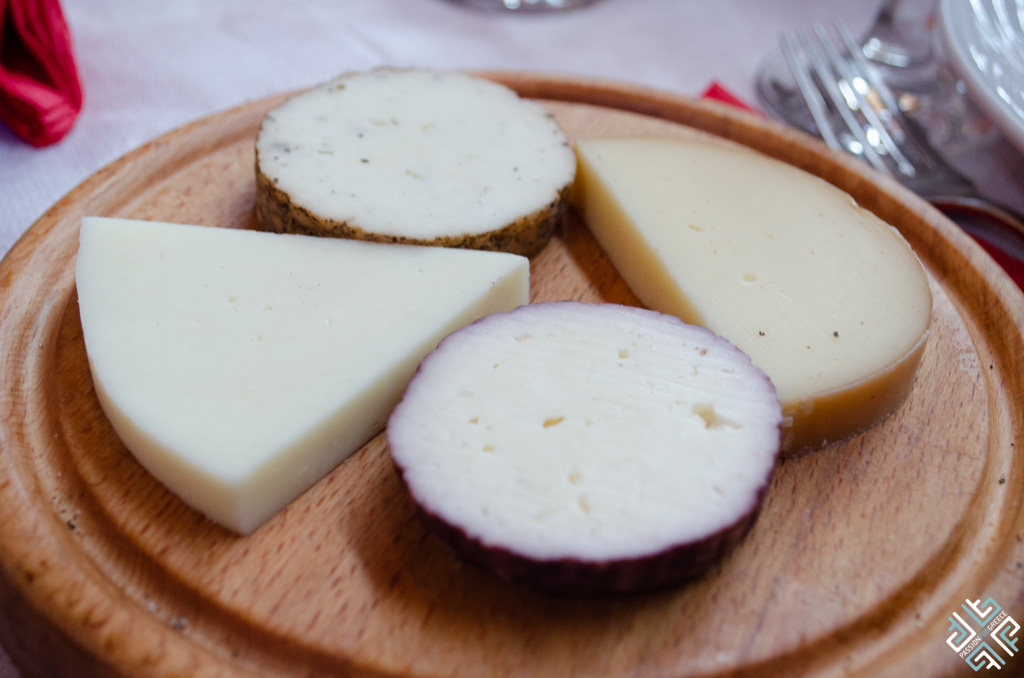 Another staple cheese produced in the region is Metsovella which is a semi-hard pale yellow cheese that has a cylindrical shape. In Metsovo you can also find a variety of flavored cheeses that are infused with red wine, black pepper and herbs. Make sure to also try galotyri, which is a soft milk-cheese with a creamy consistently and goes well with freshly baked bread or pies. All these are a delightful accompaniment to the fantastic regional wine.

Enjoy a delightful meal in one of the local tavernas 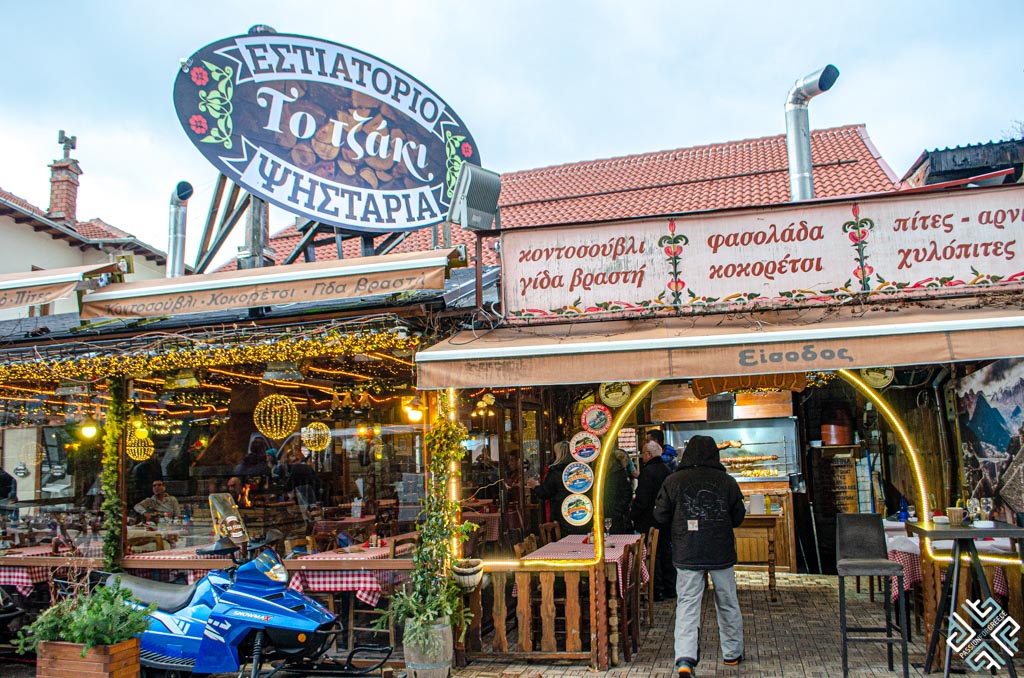 The region of Epirus heavily relies on livestock farming, thus its cuisine entails delicious meats and plenty of dairy products. The mountains are full of wild greens and mushrooms, which are used to prepare hearty dishes. Goat and sheep cooked with wild greens is also a staple recipe of the region of Epirus. 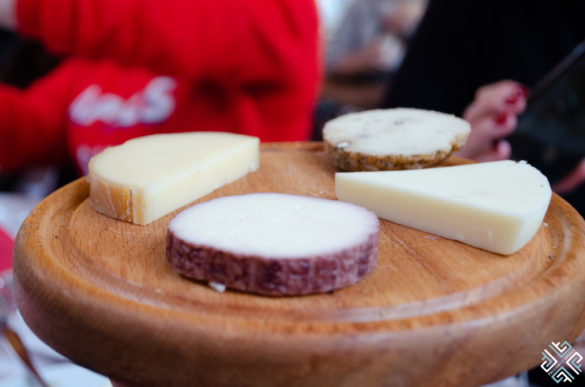 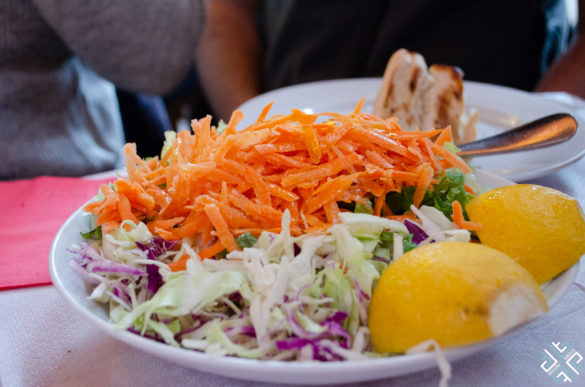 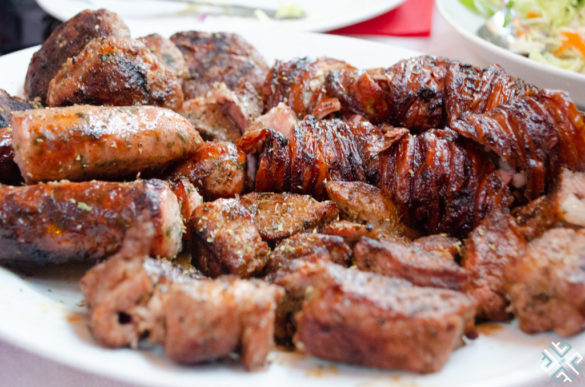 At the local taverna To Tzaki (fireplace) we enjoyed a delicious meal of grilled meats, local cheeses and fresh salads. In a cosy environment with a fireplace as a centerpiece. This family run taverna is located in the heart of the main square of Metsovo.

Learn how to make a traditional pie 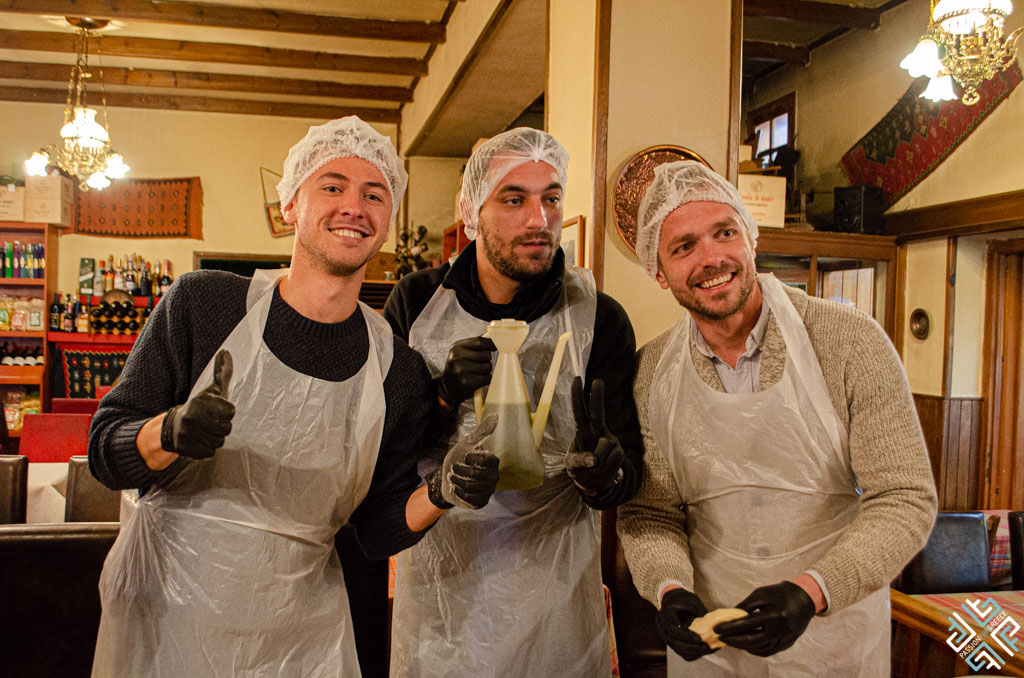 In the earlier years when the region relied heavily on farming and the economy was scarce, each household had to maximize the use of their ingredients. Nothing went to waste and this is when the making of local pies came in place and were a creative way to feed the family. As a result there were various types of tyropites (cheese pies) which consisted of different kinds of cheese fillings and hortopites, based on fillings of wild greens. At taverna Tzaki we learned the process of making a traditional pie, where a local lady showed us how to roll the super-thin dough and then compile the pie which consisted of 8 layers of dough in combination of a mixture of wild greens and feta cheese filling. 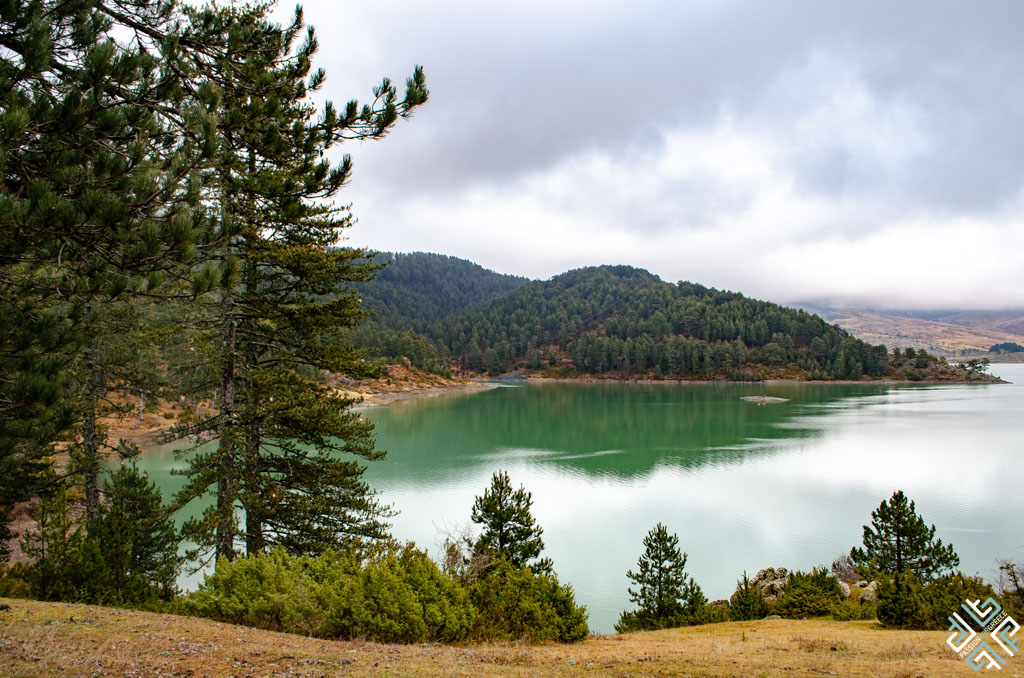 The artificial Aoos Springs Lake which was initially built to produce electric energy has become a vital part of the region’s biotype. Located 20 kilometers from Metsovo, at an altitude of 1300 meters, the landscape surrounding Lake Aoos varies each season. In winter the lake is surrounded by white mountain peaks and in the summer nature blossoms in the most spectacular way. The lake makes for a wonderful retreat during the warm summer months. 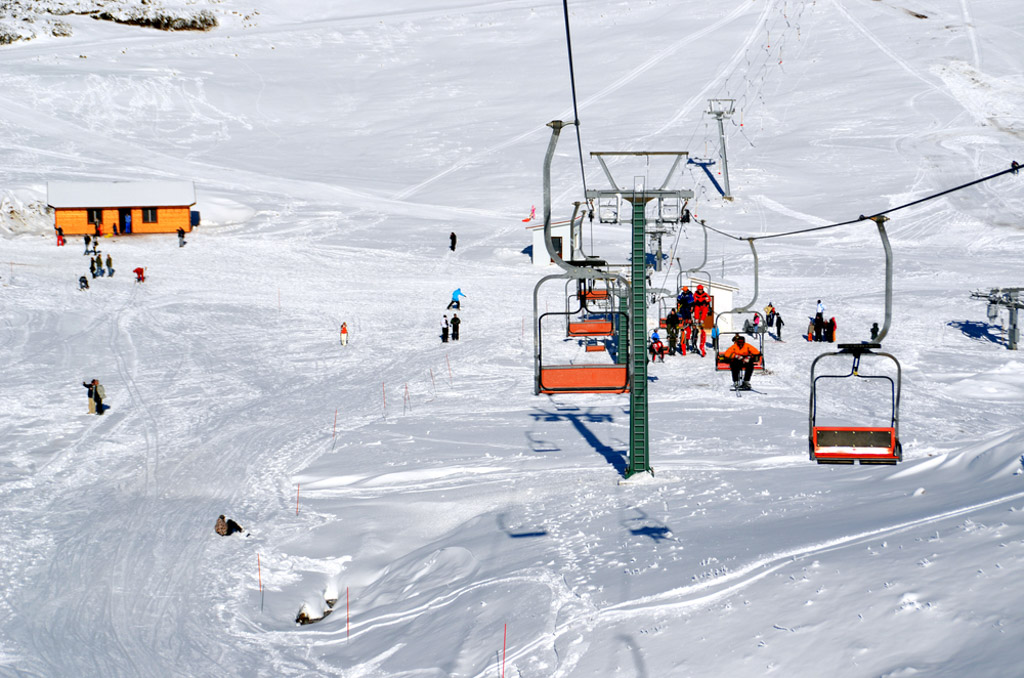 If you think that Greece is only famous for the sun and sea, then think again. Greece’s rugged mountainous landscape is dotted with excellent ski resorts.  One of the country’s newest ski resorts is located in the region of Epirus. The Anilio Metsovo Ski Resort is situated less than a 20-minute drive from Metsovo. This new ski resort features ski runs for all levels of difficulty. There is a total of 5 lifts (including baby lifts) and 13 slopes ideal for skiing and snowboarding.

How to get to Metsovo

A visit to Metsovo can be combined with other destinations. Ioannina is the closest city to Metsovo and is located approximately 50 minutes away via Egnatia Odos. If you are traveling from Athens the route is approximately 445 kilometers and will take you around 5 hours and 30 minutes to get here. Alternatively you can also fly to Ioannina National Airport. 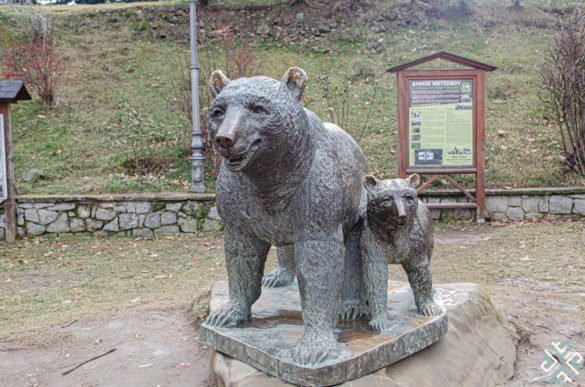 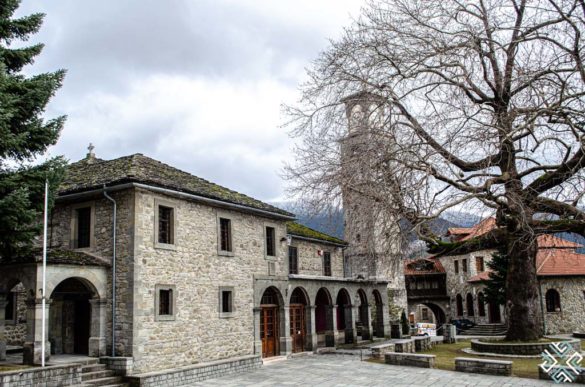 If you are traveling from Thessaloniki the distance is 217 kilometers and the journey lasts around 2 hours and 30 minutes. You can also stop and spend the night in Meteora, one of Greece’s most impressive UNESCO Heritage sites. Meteora is located 61 kilometers from Metsovo, approximately 1 hour and 20 minutes drive. For those who do not wish to drive can also take the KTEL bus, which runs from most major Greek cities.

Where to stay in Metsovo 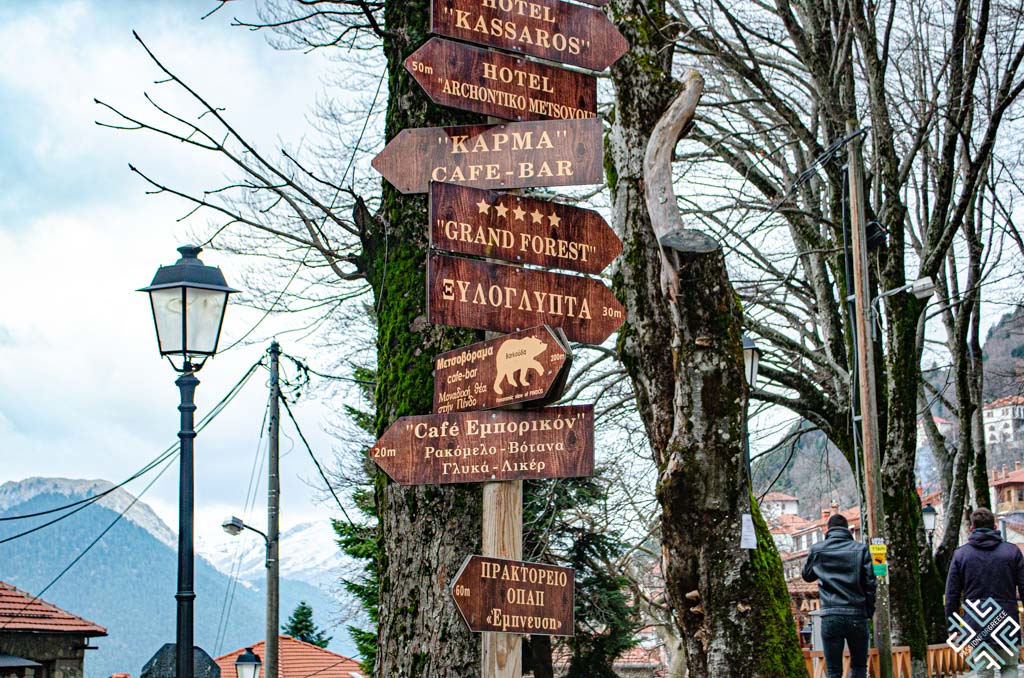 The traditional mountain village of Metsovo offers an array of accommodation options, from more luxurious retreats to smaller family run hotels. The Katogi Averoff hotel & winery is one of the wonderful choices right in the heart of Metsovo. A traditional stone built complex of 15 guestrooms is an ideal choice for wine lovers, offering luxurious services and stunning mountain views. 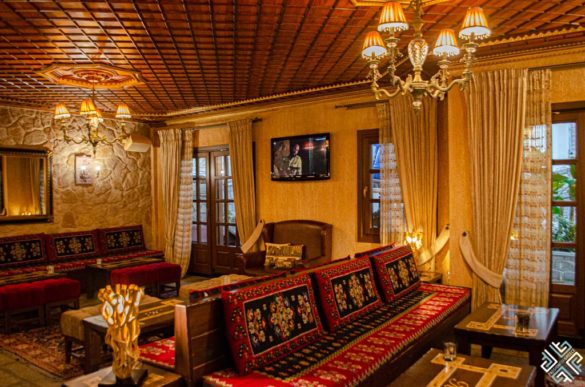 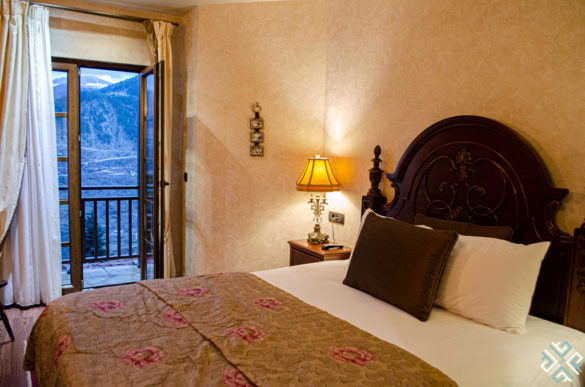 A more affordable option is the Hotel Kassaros, with a 2-star rating and services that can easily live up to a four star hotel, this cozy family run hotel is situated a short walking distance from Metsovo’s central square. Hotel facilities include a free sauna, steam shower cabin and hot tub. A perfect retreat for any time of year.

Have you been to Metsovo, Greece?

*The trip was organized by Epirus.Travel .All opinions expressed are always my own.