On Sunday 8th of February together with my two fellow travel bloggers, Bex of Life Beyond Borders and Costas of Table Salt, we represented Travel Bloggers Greece on a Street Art Tour of Athens organized by the Alternative Tours of Athens. 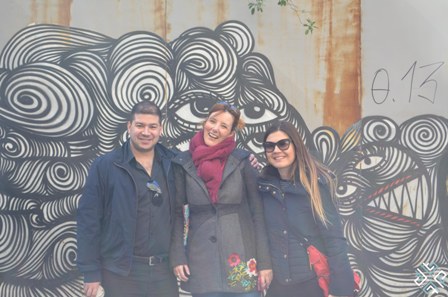 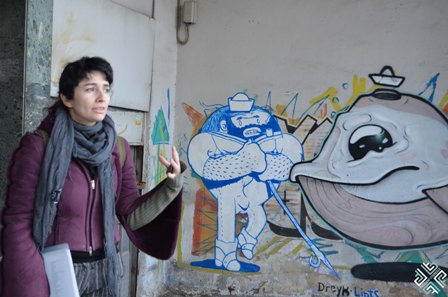 Street Art Tour of Athens: One of the Best Art Tours of Athens

We met with Maria who was our guide for the three hour, in Omonia square and made our way walking around the streets of Metaxourgeio and Gazi, discovering the works of art portrayed on the cement surfaces around the city. We saw a lot, when I say a lot; well I have never seen so much street art in my life. Every creation that we saw was developed using various fonts, styles, and techniques. Each carrying its own hidden meaning that the artists tried to convey. 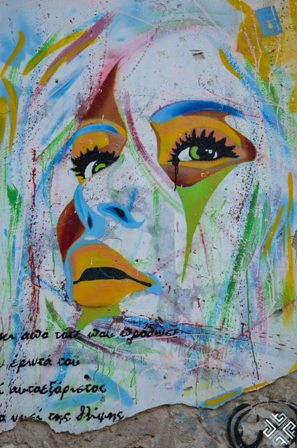 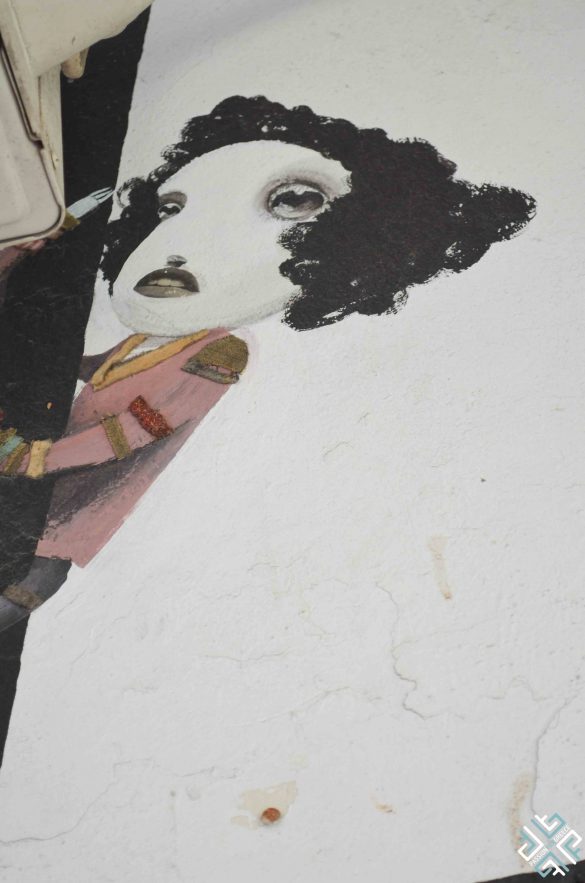 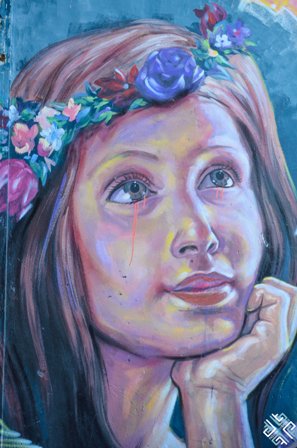 The first masterpiece that we came across was the “praying hands” on Pireos Street which were painted looking down, conveying a message that the prayers have been addressed to save the city and its inhabitants from the crisis. This project was created by Manolis Anastasakos. The concept of tagging became popular in New York during the late 1960’s and early 1970’s when a Greek guy named Demetrakis or Takis 183 for short wrote his nickname around the streets of New York. He is known to be one of the most influential graffiti writers in history. So I guess this explains the popularity of Street Art that Greece has found over the years.

The street art in Greece was around since the 1980’s however it gained momentum in 1998 when the Greek capital organized the first international graffiti festival, an initiative of the Hellenic-American Union, which was held northwest of the Acropolis. A group called Carpe Diem, one of whose founders was Vangelis Hoursoglou (a.k.a Woozy), was established to support graffiti artists and to provide them with legal basis as well as with canvases. 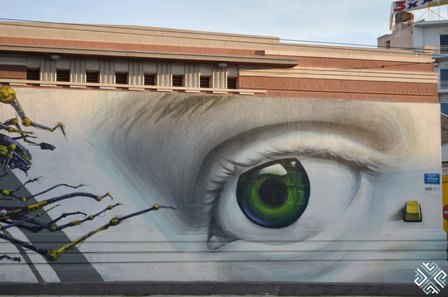 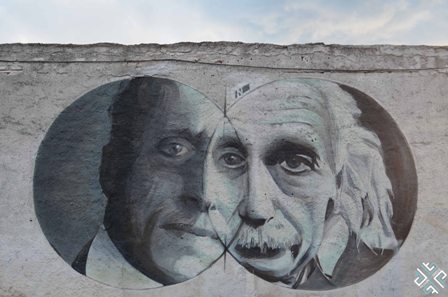 As we walked further inside the little streets of Athens we came across the work of Alexandros Vasmoulakis who is one of the well known Street Artists. His work is a mixture of expressionistic and pop elements. Another famous artist whose works we saw is De who used stencils to create his pieces always including the letters DE.

We then walked passed the Breeder Gallery, a building which once was an ice-cream factory. In fact it is an award winning architectural project completed by a famous Greek architect Aris Zampikos. Just across the road from the gallery one can see another popular work of art which is known as the ‘System of Fraud’ which was created by iNO using aerosol spay and acrylics. 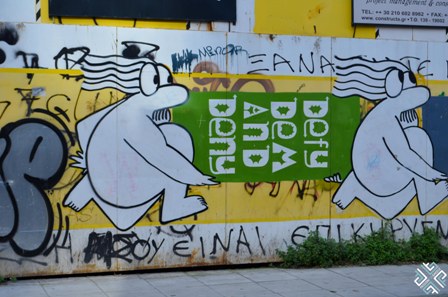 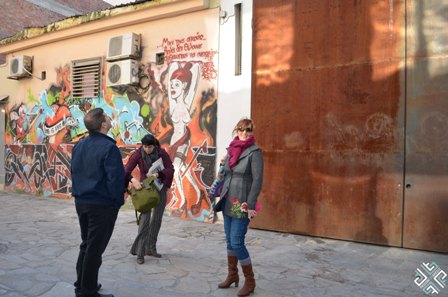 A dentist called Paul also found a way to expresses himself on the cement walls of Athens by creating pieces using multi layered stencils. Apparently the one piece of work that portrayed a beautiful woman is a portrait of his girlfriend whose heart he was trying to win back.

Around the Keramikos area you will come across some peculiars doodles of fairy tale creatures made of black and white with a touch of red. The artist behind these is known as Sonke and he has made sure that his presence is felt on the Streets of Athens. 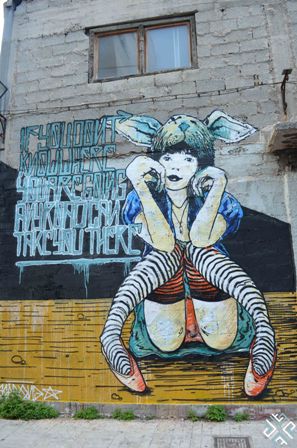 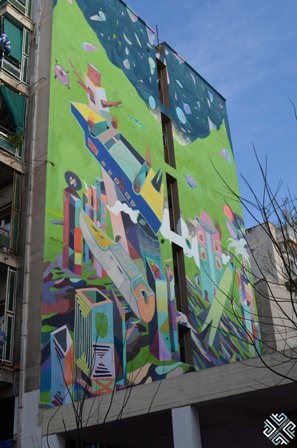 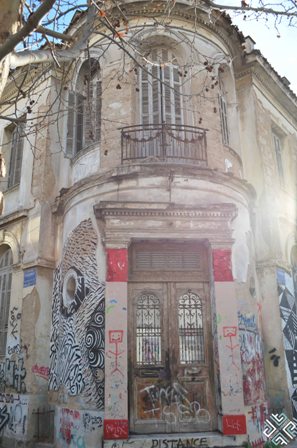 One of my favourite pieces was of the sea creatures created by Dreyk the Pirate and Lints. What was particularly interesting to find out that foreign street artists have also discovered the urban canvases of Athens and we saw some works of artists such as WD a.k.a Wild Drawing who is from Bali. We saw his two creations of a girl and a boy with a Joker smile. The message that the artists is trying to convey is that people should smile more. 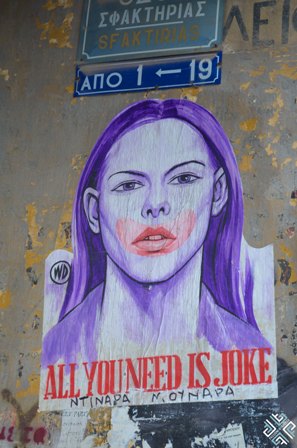 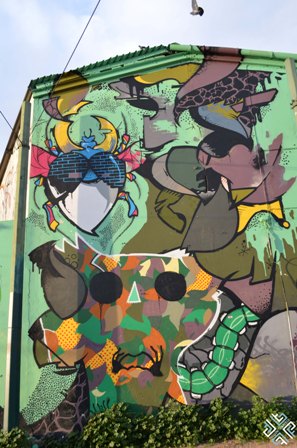 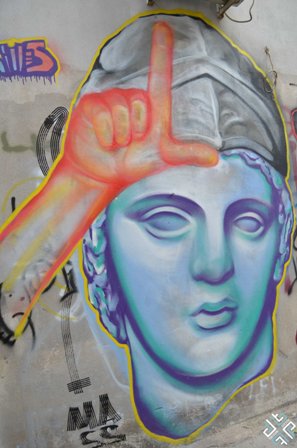 Conclusion on the Athens Graffiti Tour

It was a very informative and interesting tour indeed, and I definitely recommend it to those who are fond of graffiti and street art. There is a lot to see! In the meantime enjoy the images in the comfort of your home.

4 Days in Athens: A Local’s Guide to Athens