Some people would argue, but if there were no Central Park, New York would make little sense. One of the largest and most famous parks globally, Central Park, is the real gem of the city and the place where people love to rest and recharge their batteries after spending a day in a concrete jungle. And not just that! Many people associate the most important moments of their lives, like making a proposal with this marvelous place. 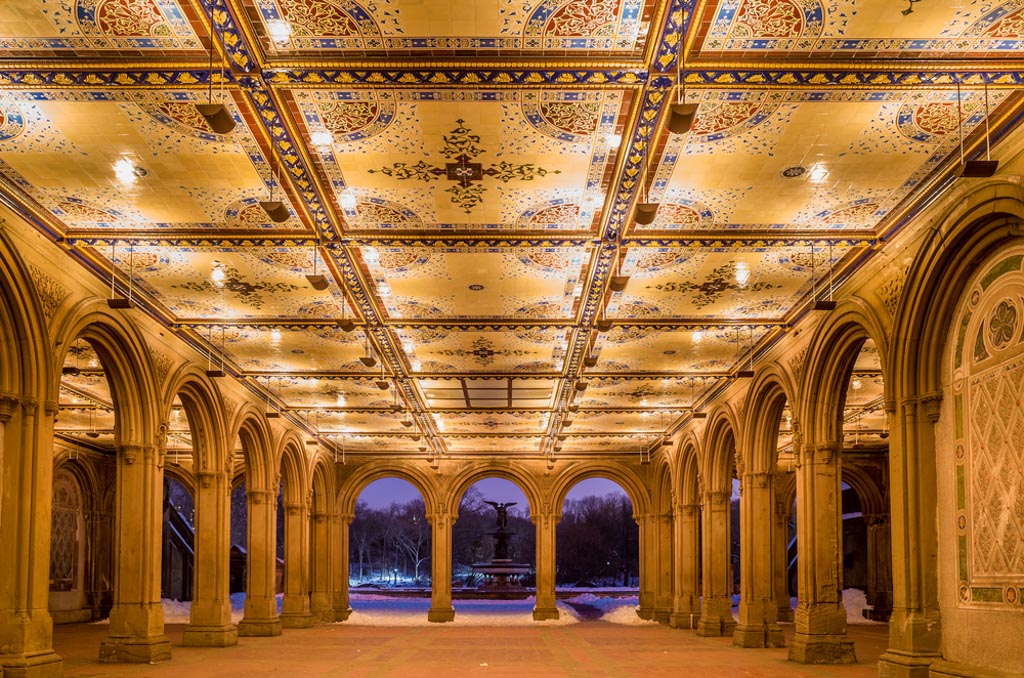 Besides being the main oasis of a bustling city, Central Park is also full of attractions, beautiful bridges and arches, sculptures, classical architecture, green meadows, magnificent landscapes, and more. According to the stats, 9 million people make 42 million visits to Central Park a year, with approximately 242,000 visits on a summer Sunday and 44,000 on a weekday in winter. And here are 15 reasons why you need to visit this marvelous place too!

#1 Explore the Bridges and Arches of Central Park

Central Park boasts more than 30 bridges and arches which contribute to this place’s innovative circulation system. Many of these bridges and arches were made to accommodate not just pedestrians but also, horseback riders and horse-drawn carriages. This is why even in the 21st century, when you see a horse-drawn carriage crossing the bridge in Central Park, it looks very natural. Among all arches and bridges we have selected the top 7 that we recommend you to visit: 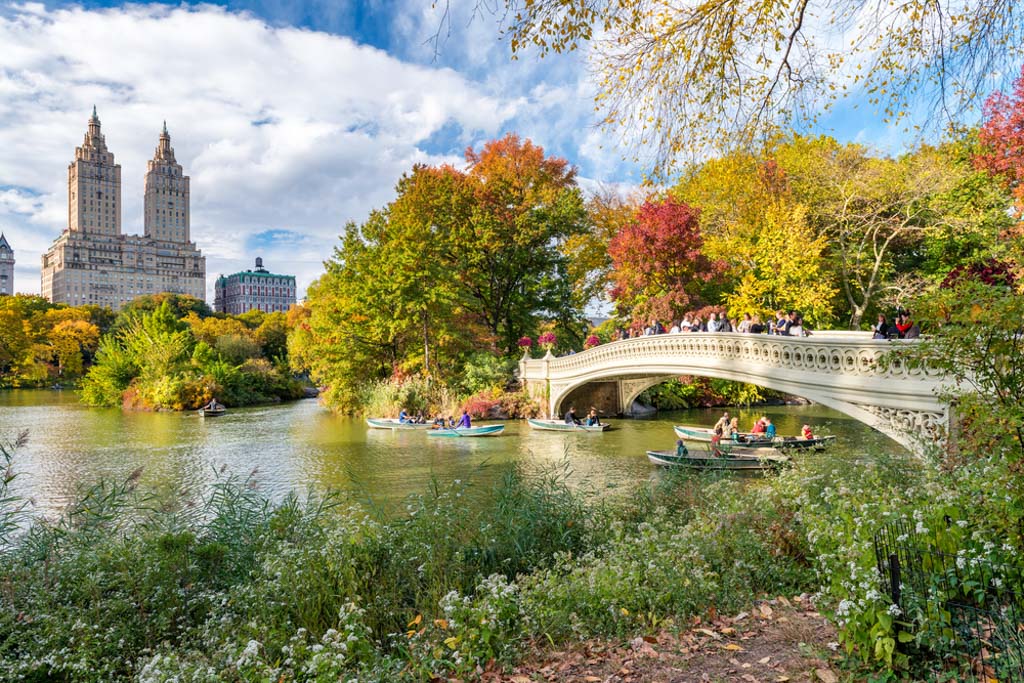 Also check out our: New York Itinerary 7 Days in the Big Apple

From April to May, many nature lovers from all over the world come to Central Park to enjoy the cherry blossom trees. A week after the first buds open, one can expect to see the trees in the full bloom, which is an event of extraordinary beauty. The two main species of cherry trees in Central Park are the Yoshino Cherry and the Kwanzan Cherry (also known as the Japanese Cherry). The Kwanzan Cherry trees start to bloom early in May shortly after the Yoshino Cherry. The highest concentration of cherry blossom trees can be found around the Cherry Hill (hence the name), Great Lawn, Reservoir, Pilgrim Hill, Delacorte Theater, The Glade, Nell Singer Lilac Walk, and Cedar Hill.

# 3 Relax at the Great Lawn 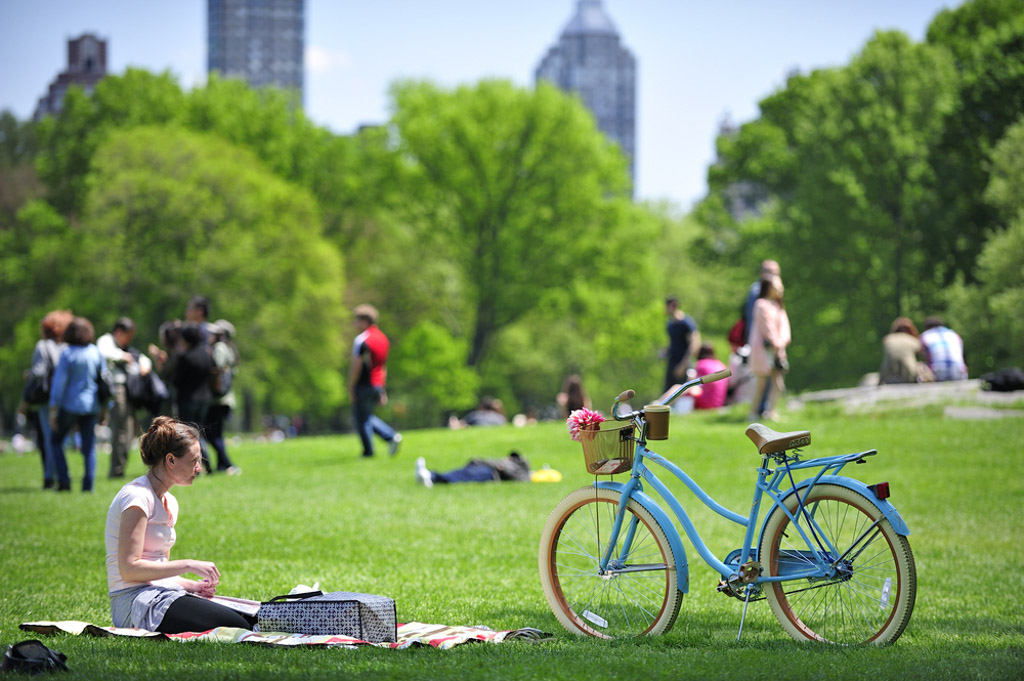 Being one of the most famous lawns in the world, the Great Lawn is located in Central Park’s center. This is a splendid place to get your daily dose of vitamin D from the sun and make a family picnic. The Great Lawn is known not only for its vast and serene greenery but also as a famous spot for annual concerts of world-class acts such as Bon Jovi, Diana Ross, and Garth Brooks.

You don’t expect to find a castle when going to the park, don’t you? But this is Central Park, which means that you should expect the unexpected! The two balconies of the castle offer marvelous panoramic views on some of the most famous landmarks in the park. The castle itself is also a pleasure to observe too! Initially, the castle was built for the sake of beauty alone, but in 1919 the castle tower started to be utilized to determine the speed and direction of the wind. It’s still being used for meteorological purposes. 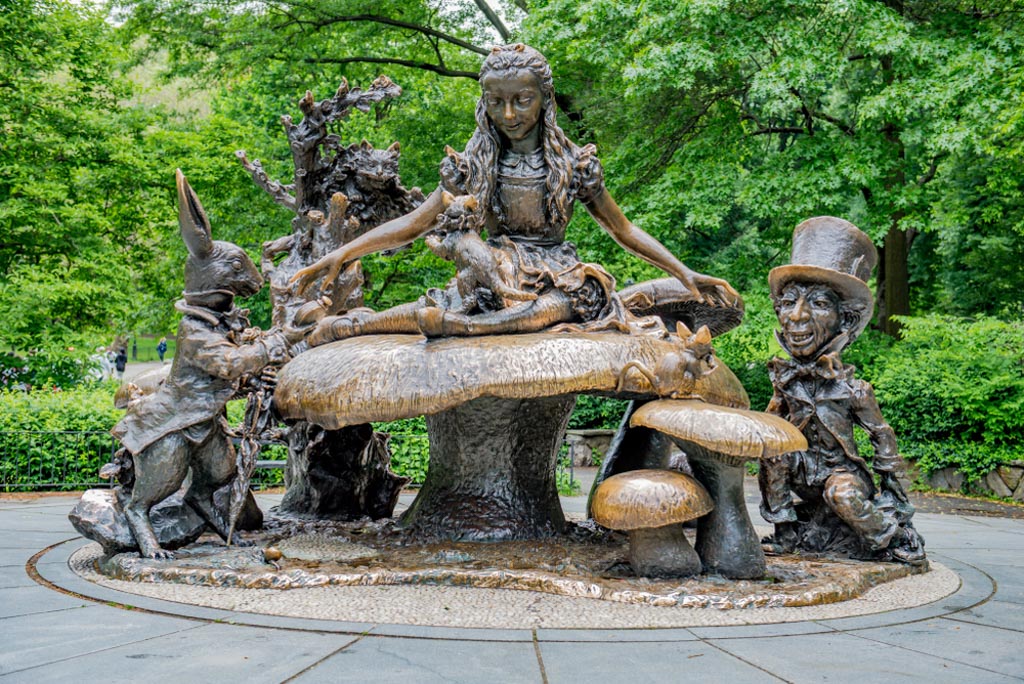 There’s an abundance of sculptures in Central Park, and some of them require special attention:

You can take a look at the complete list of Central Park’s sculptures here.

# 6 Enjoy lunch at Tavern on the Green

When you notice that beauty doesn’t impress you, you probably had enough of walking and sightseeing, and you need to take rest and have a snack. And you can do this in one of the most iconic restaurants in New York – Tavern on the Green. John Lennon celebrated several of his birthdays here in the 70’s, and it has served locals, royalty, actors, artists, and presidents since 1934. You could have seen this place in such movies as Mr. Popper’s Penguins, Ghostbuster, The Out-of-Towners, and Arthur. And there’s no reason you should skip visiting this place yourself on your next visit to Central Park. 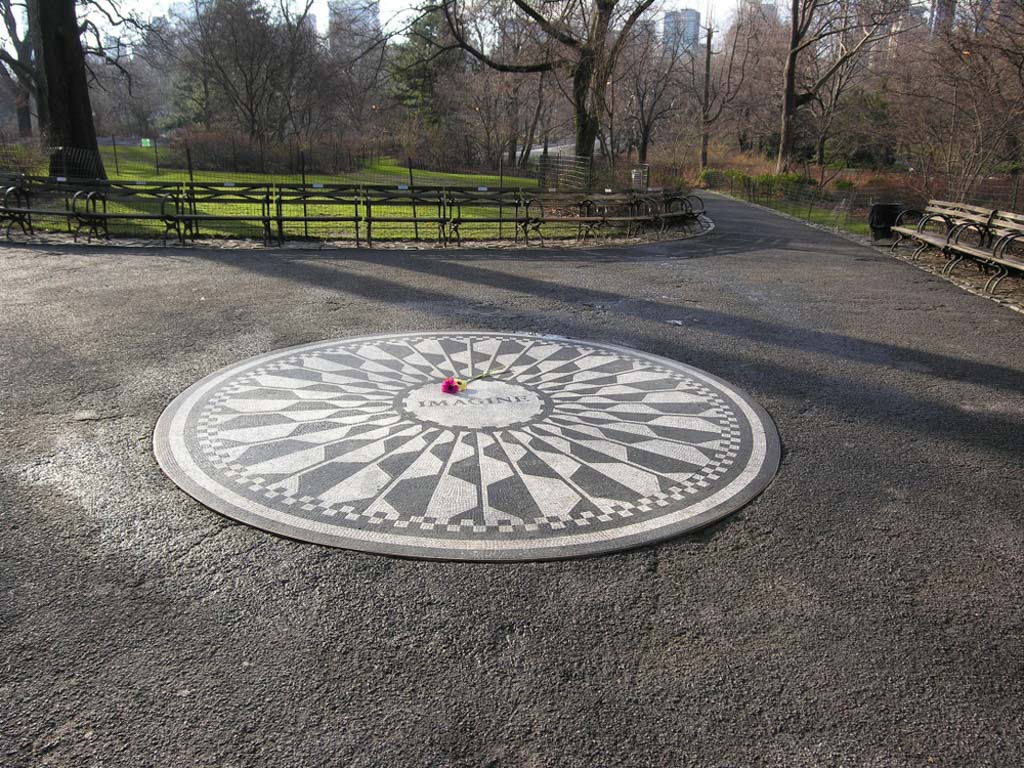 If you’re a Beatles or John Lennon fan, then Strawberry Fields is a place that you should definitely visit. It’s a 2.5-acre area between 71st and 74th Streets, which pays tribute to the famous Beatle, John Lennon. Every year, on the day of John Lennon’s death and the date of Strawberry Fields opening (the 9th of October), fans from all over the world come to this area to commemorate Lennon’s legacy. The ‘Imagine’ mosaic that you will see evokes the hope for a world without war and conflict. I wish John’s vision for humanity comes true one day. 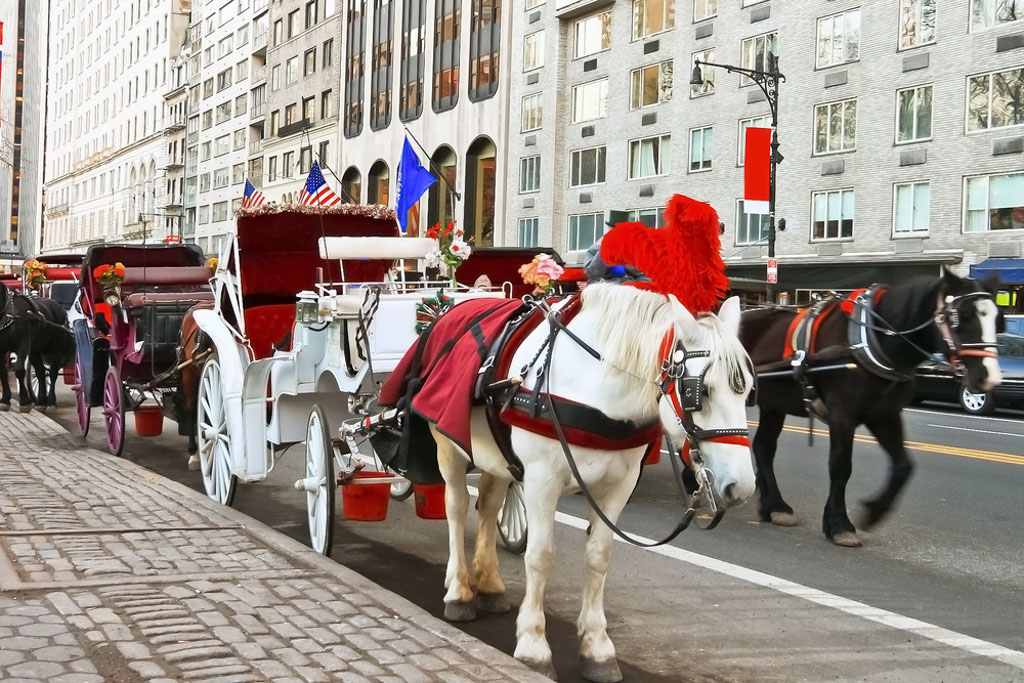 If you think that exploring Central Park shouldn’t only be about walking, you can consider taking a 45-minute horse-carriage ride. Along with marvelous landscapes and bridges, you will also be able to explore the historical landmarks of Central Park. You will see the Bethesda Fountain, Strawberry Fields, Angel of the Waters Sculpture, the statue of William Shakespeare, the legendary restaurant Tavern on the Green and circle the fountain at Cherry Hill. You will also hear stories about the park’s past, which will make this ride really special. This is an excellent option for couples and families.

# 9 Explore the fountains of Central Park 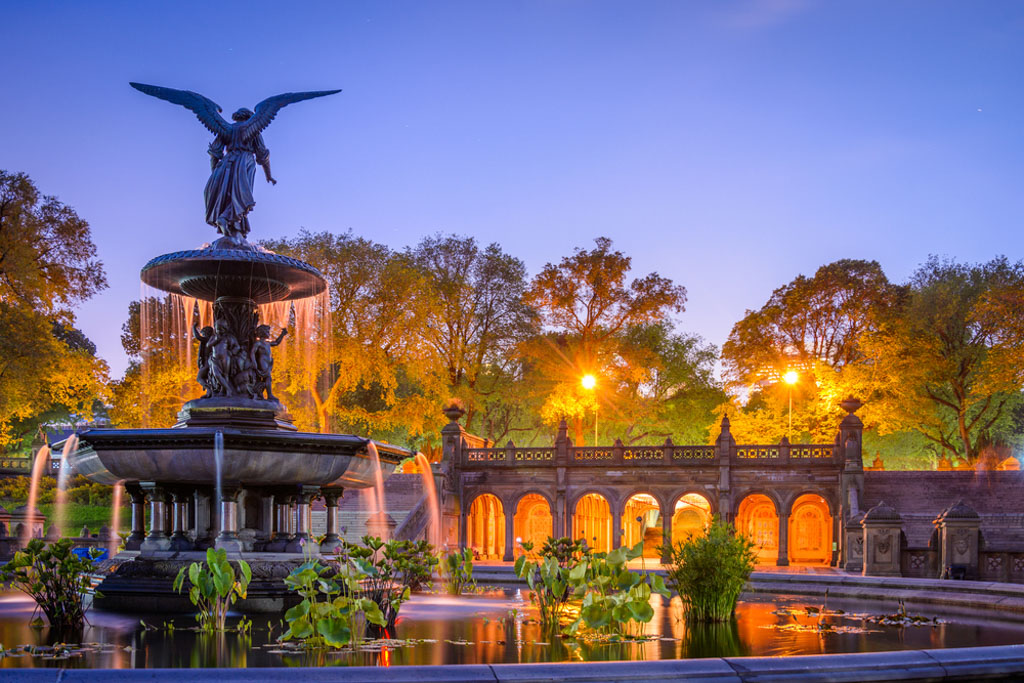 Central Park has plenty of bridges, arches, sculptures, so no wonder that it also has many beautiful fountains:

At first, having a commercial carousel in the park wasn’t considered as a good idea. But people absolutely loved this, and now approximately 250,000 people take a ride on the Central Park Carousel annually. Throughout 150 years, there have been four different models of the carousel. The one that’s installed now is over 100 years and was repaired a number of times. It’s not replaced because it’s still in good working condition and of course because it’s charming! 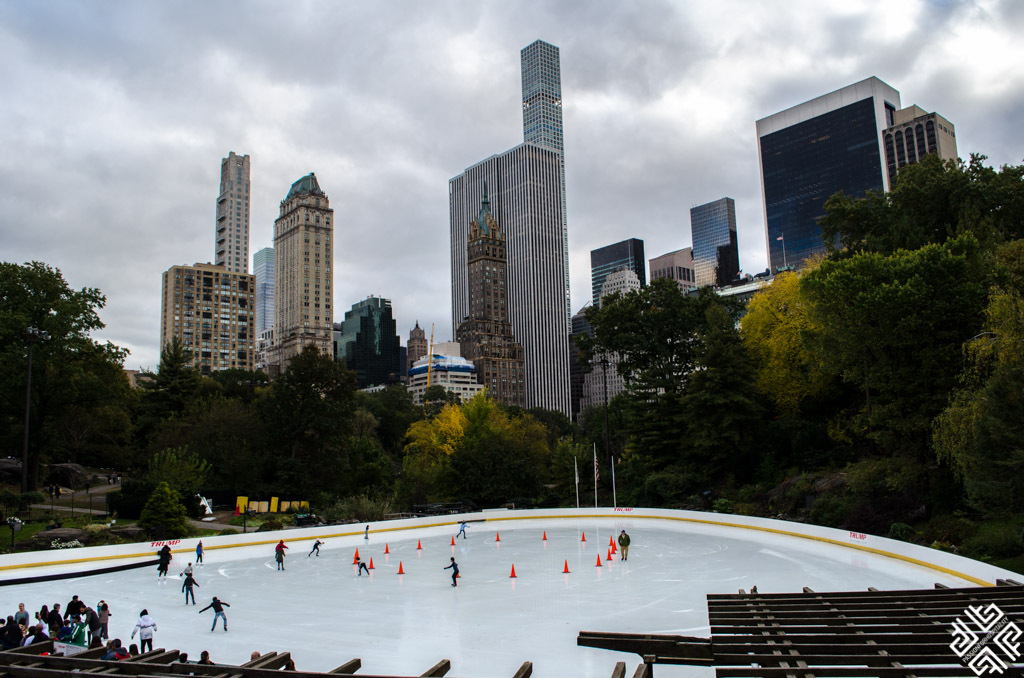 Wollman Rink has been Central Park’s favorite attraction for decades. We bet you have seen it many times in the movies, and when you visit Central Park, you should go there in person. Especially from late October to early April, when the rink becomes filled with joy and laughter. In addition to ice skating, you can also attend skating school, play ice hockey and make use of lockers. During the summer, when ice entertainment is not possible, the rink turns into Victorian Gardens amusement park. The Wollman Rink is less than a five-minute walk from the south entrance of W. 59th Street and 6th Avenue.

Conservatory Garden is Central Park’s only formal garden. There are no bicyclists or runners there, making it a great place to enjoy tranquility, take relaxing walks and even arrange a wedding. On the six acres of the garden, you can see beautiful seasonal plants of different styles, namely Italian (crabapple and yew trees), French (spring tulips), and English (magnolia and lilac trees). The Conservatory Garden was restored recently and has become even a better place to spend a relaxing afternoon or evening. 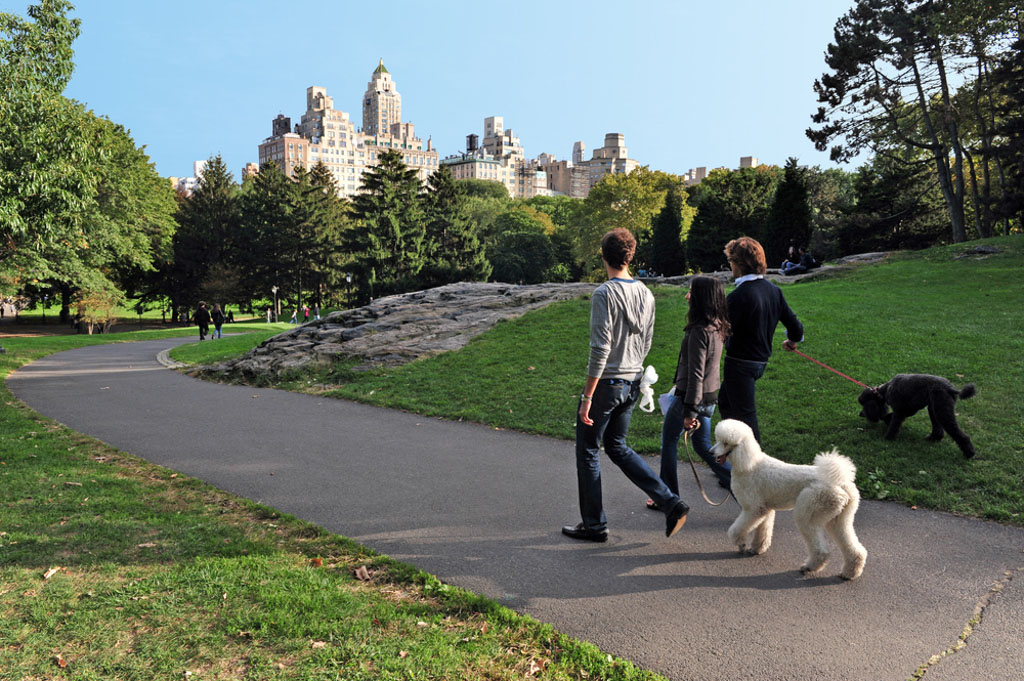 # 13 Discover Central Park on a Bicycle

Who wants to ride their bicycle? Even if you don’t have a bicycle, you can easily rent one in Central Manhattan and make yourself a nice Central Park tour using the guide that you’re reading. Central Park is so big that you won’t be able to see everything in one day if you choose to explore it by walking. So if you’re limited in time, taking a bicycle can be a splendid idea. You can just go to the bicycle rental and see Central Park on your own or take a 2-hour ride with a licensed professional tour guide. The choice is yours.

# 14 See the Highlights of Central Park on a Pedicab

If you can’t ride a bicycle you can see the highlights of Central Park on a Pedicab.  It can be either a one-hour or a two-hour tour where you will visit many famous landmarks such as Cherry Hill, Tavern on Green, Strawberry Field, the Bethesda Fountain, Bow Bridge, the Dakota Building and more. The two-hour winter tours are not available in winter due to cold temperatures. 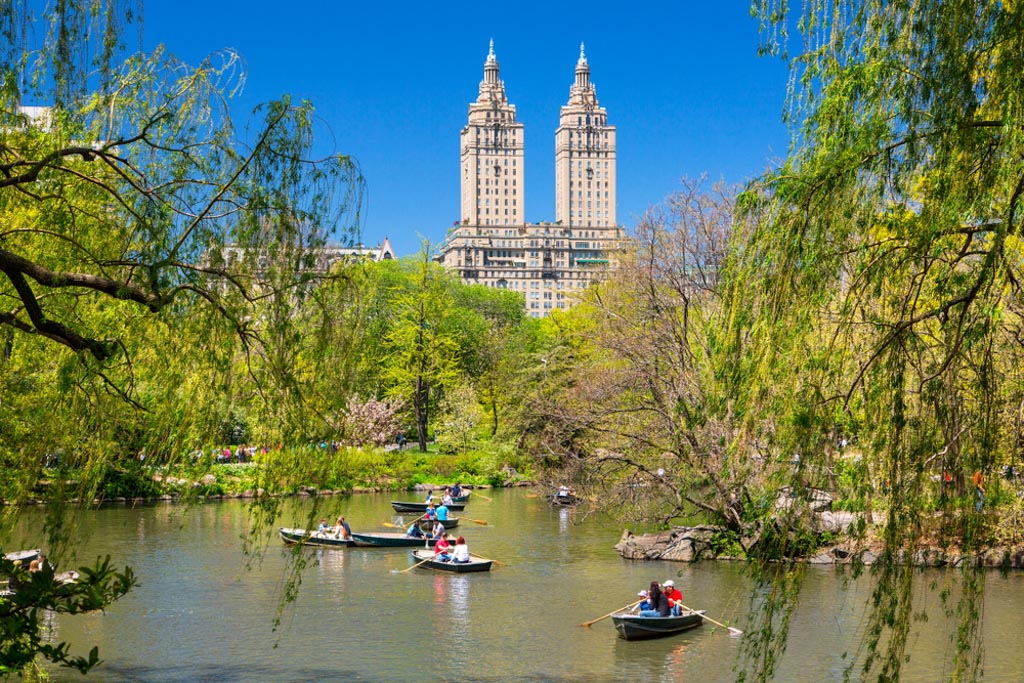 Central Park’s lake is not be missed as this stunning 20-acre lake is one of the best spots to relax, watch swans, ducks, and even herons and egrets. You can also rent a rowboat during the spring and summer months to make your stay on lake even more enjoyable. If a simple boat isn’t good enough, you can take a Venetian-style gondola ride and roam the area with style! We advise you to take a boat ride as you will be able to go through bridges, bamboo patches and enjoy the vibrant nature of Central Park. 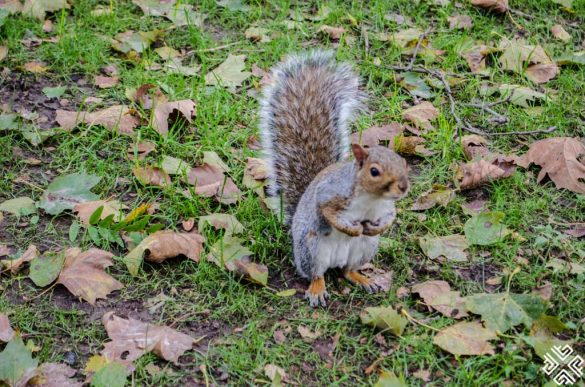 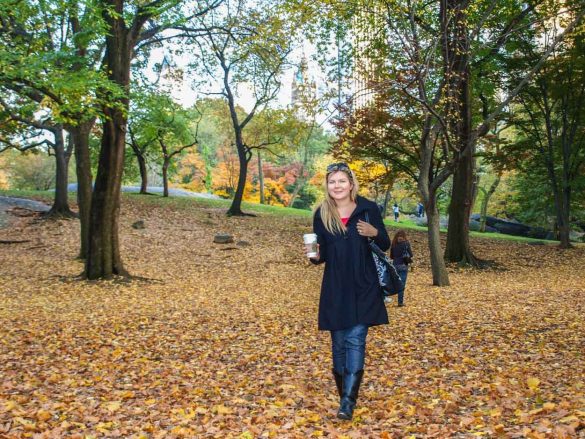 New York, New York…of all the wonders and experiences that you offer, Central Park is the most magical one. Even if you explore every corner of New York, most probably Central Park will still remain one of your all-time favorites.