Death in ancient Greece was considered something sacred and was equally important as life — this is what I recently discovered on a walking tour in Athens with Greek TravelTellers. Thousands of years of history show us how meticulous the ancient Greeks were in preparation for their afterlife, and having recently traveled across the country, visiting the renowned museums which hold the precious artefacts, and listening to archaeologists speak about the underworld — I was curious to discover more. 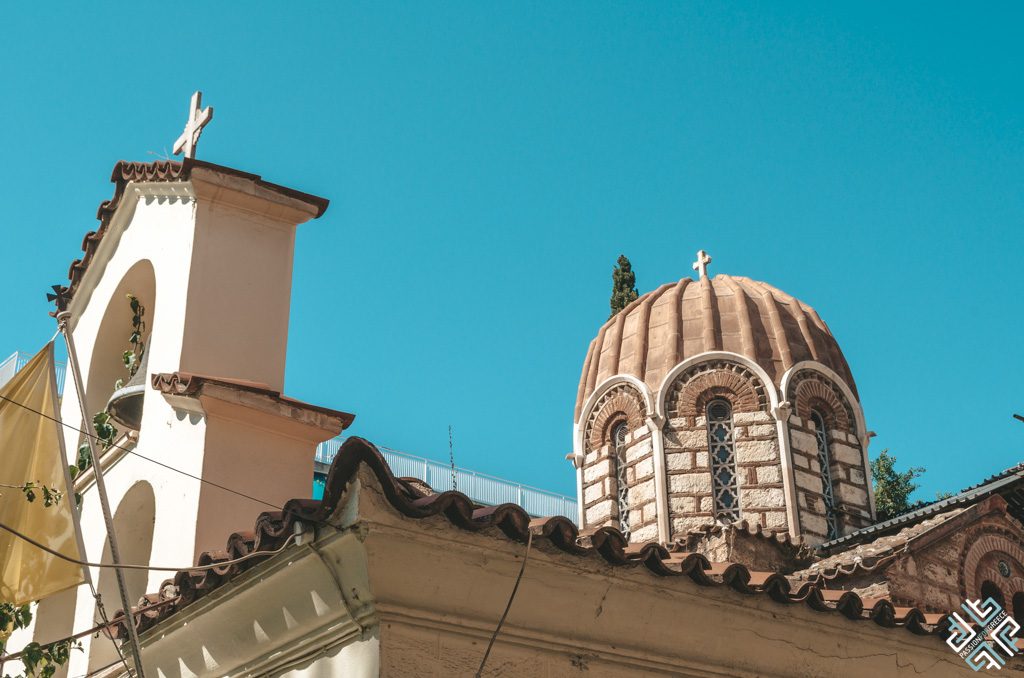 Over the years I have been on several walking tours in Athens, having heard stories and facts about this fascinating capital, which are never ending. Knowledge can literally be found on every corner and each stone you turn, has its own unique story to whisper. We live a fast paced life, most of the time we pass by everything around us at the speed of light, rather than stop for a moment and enjoy the surroundings. 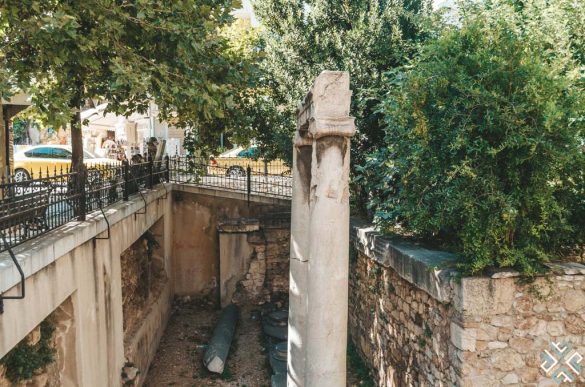 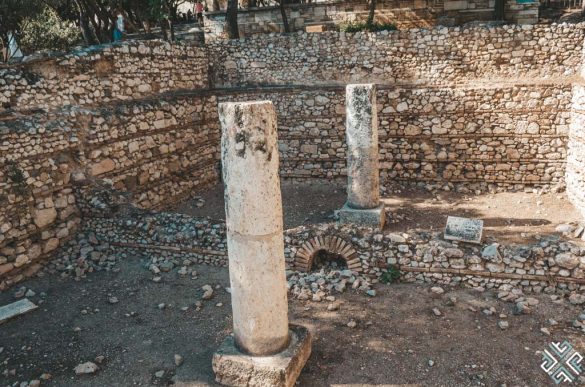 The Greek TravelTellers, is a young company founded by Dimitris Stratigentas and a team of passionate archaeologists whose idea was to craft walking tours that would offer interactive and experiential themed tours to allow visitors to delve deeper into the mindset and the soulset of the ancient Greeks. Why did they build what they did, and how did they live their lives preparing for their afterlife? 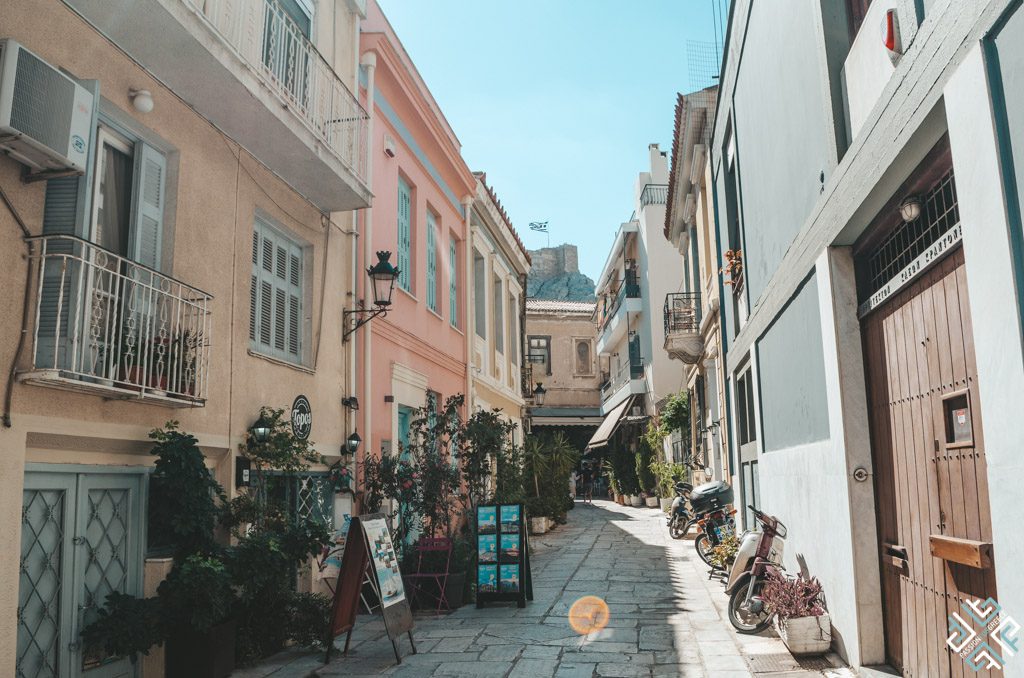 Their primary goal was to leave an eternal impact long after they were gone, they were not primarily seeking temporary pleasures but rather followed a series of exemplary measures which allowed them to be remembered forever. Take Alexander the Great for example, explained Konstantina — “ We don’t know what he really looked liked but what we see in his statues, which all depict the same face and style”. He instilled a carefully curated branding around himself and marketed himself accordingly. 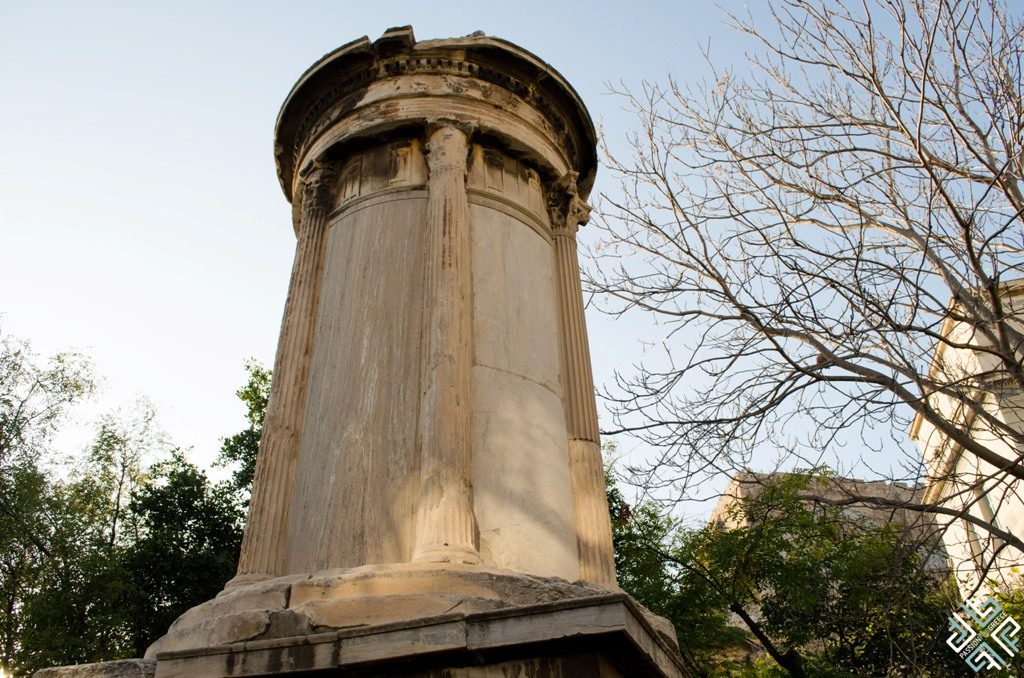 During the time of theatrical games, 4th century B.C. all the performances had sponsors. The best preserved choregic monument is the Lysikrates Monument which was part of the Street of the Tripods. Centuries before that whole street was lined with similar looking monuments which were erected to celebrate the sponsors and were used as torches to light the way. The wealthy Athenians would sponsor choruses for dramatical and musical performances, and these same sponsors would place monuments in their honor — they wanted to evoke memories.

The ancient Greeks believed that after death their soul would travel to the underworld ruled by Hades, brother of Zeus and Poseidon — who was  considered  to be the darkest god in Greek mythology. 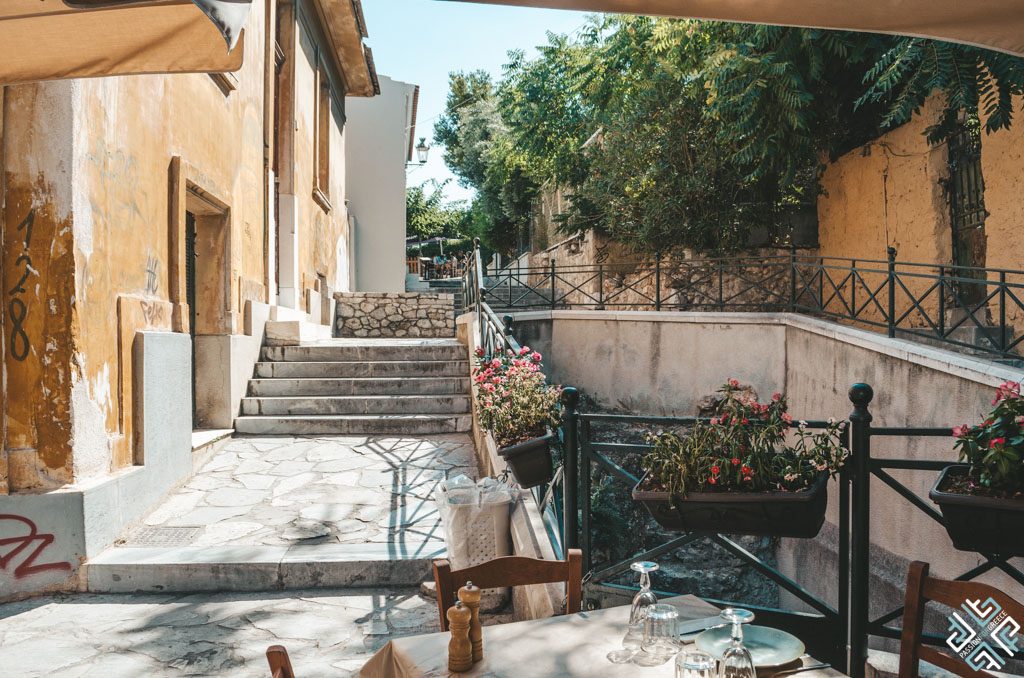 Following a series of steps along the journey the soul would eventually end up in the Asphodel Fields, that’s where people actually forget all memories of their former life. Up next on the road three judges would decide the future of the soul — if it went to Elysium, a happy place where the sun always shone, the punished ones would end up in the  dark place called Tartarus and other would end up where they started at the Asphodel Fields. Apparently this was even worse as they could not experience either joy or sorrow. 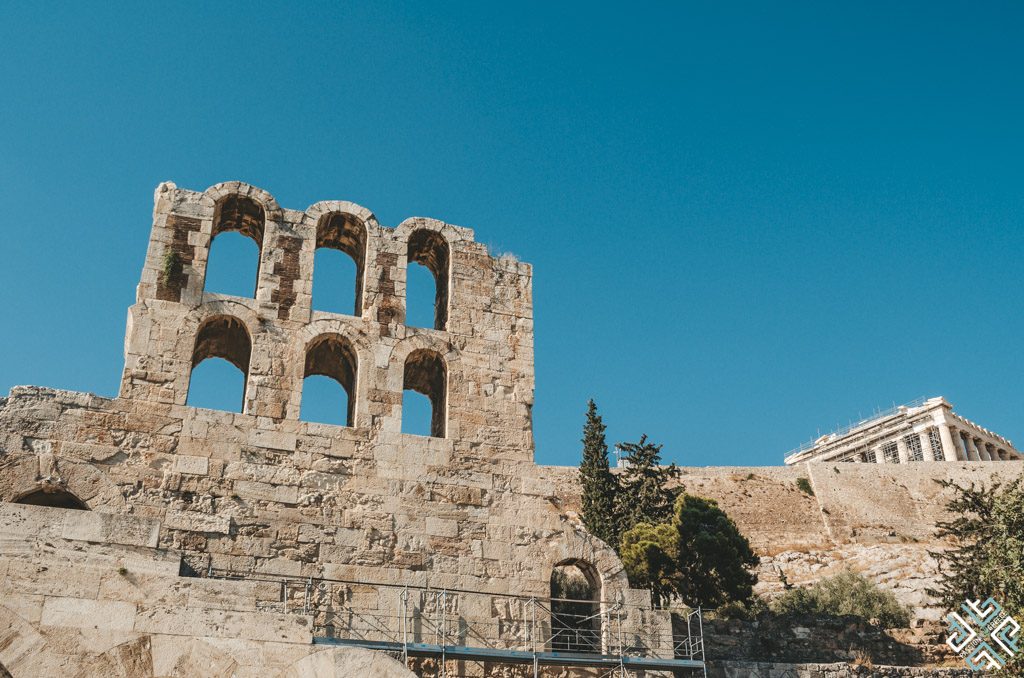 To get here however and to have the ferryman carry the dead across the river, they had to have a golden coin hidden in their mouth that would grant them access to the Underworld. When the dead were buried the tombs were filled with objects from their life, ranging from vases to jewellery and weapons if the person buried was a warrior. It was believed that these items would come handy in the Underworld. A great collection of such artefacts can be found at the Archeological Museum of Thessaloniki or even better at the Royal Tombs of Vergina, one of the most impressive museums I have visited.

The Pomegranate: The Myth of Persephone

One of the most poignant stories is that of Persephone, the daughter of mighty Zeus and Demeter, goddess of crops and harvest. Hades fell in love with Persephone and kidnapped her, taking her to the Underworld. Demeter walked over the face of the earth searching for her beloved daughter and when news came of the fact that she was abducted by Hades, Zeus refused to get involved. 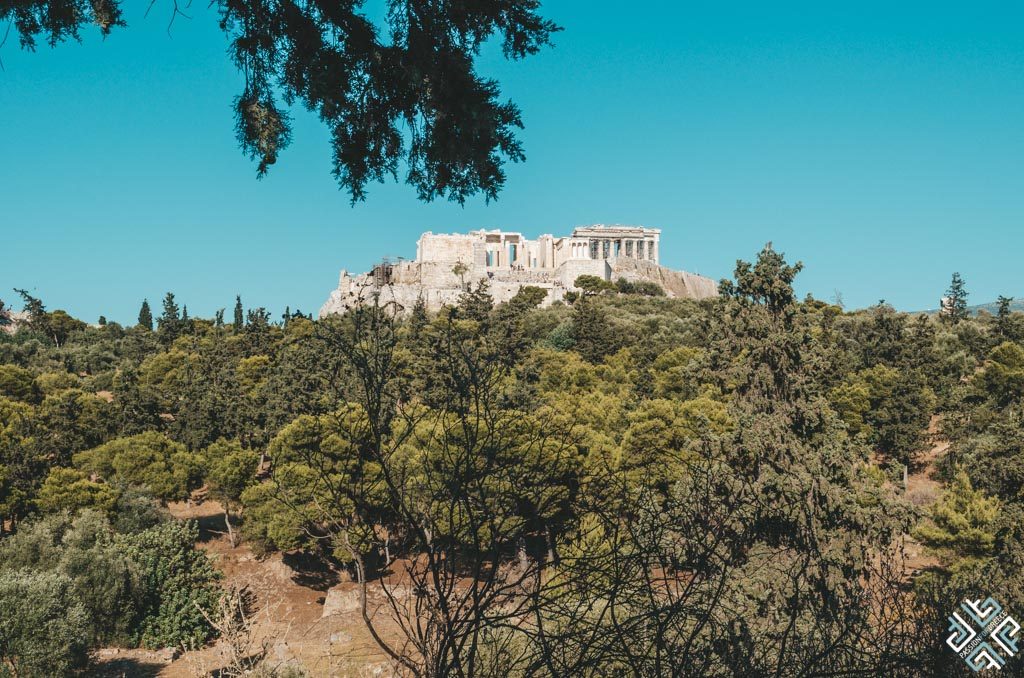 Demeter threatened to leave her role as the goddess of crops which would mean that nothing would ever grow again. Zeus eventually had to interfere and so Hades agreed to let Persephone go on one condition, that she would eat some  pomegranate seeds— the reality was that this would tie her to Hades and the Underworld for eternity – she would spend one-third of the year with him and the remaining of the time with her mother. And this is how autumn turns to winter and waits for spring and summer to arrive — the cycle of life, everything that ends is also the beginning of something else. And perhaps did Persephone love Hades after all?

The Prison of Socrates and the Three Fates

Just west of the Acropolis lies the cave like structure carved inside the Hill of the Muses which led to the legend that it is the Prison of Socrates, where the famous philosopher was jailed to be executed in 399 BC. During the tour we went into role-play which allowed us to bond with our heroes and to feel the history at a greater depth. Konstantina handed out the verse — so we could recite the message of Socrates — to feel the brilliance of this mastermind. He did believe in the greater importance of the mind and was not fearful of death when the decision was that he had to be sentenced to death. 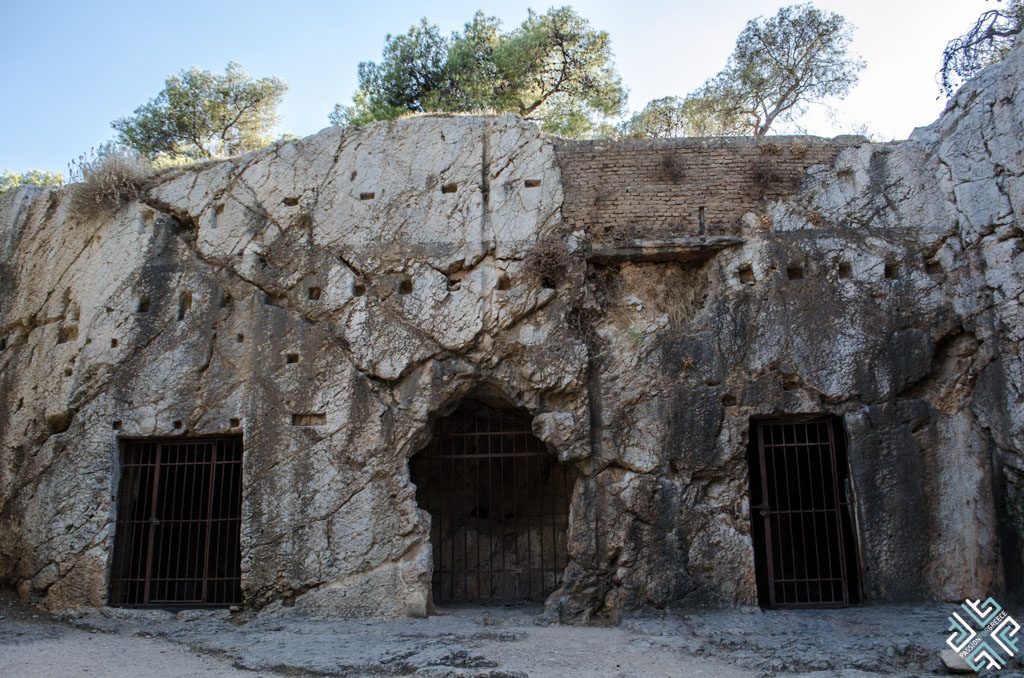 A legend has it that right here at the Hill of the Muses where three fairies lived during the Middle Ages is actually the same place connected to the myth of the Fates — moira in Greek, there three old women who would spin the threads of human destiny. Clotho, was the one who spun the threat of the human life, Lachesis dispensed it throughout the course of life and Antropos cut it — which determined the end of a human life. That’s why they say that our lives are usually planned.

The Best Viewpoints and Pretty Alleyways 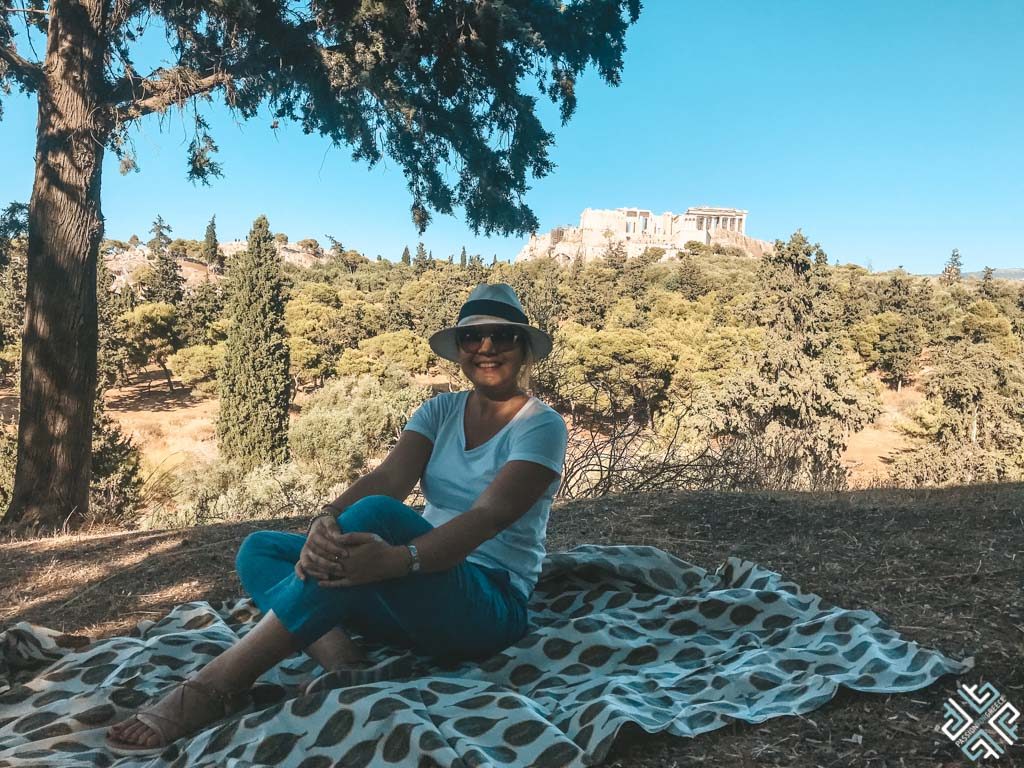 On our tour we also got to witness the famous Acropolis from different viewpoints while we played a few games and learned all about the inspiring lives of the ancient Greeks. 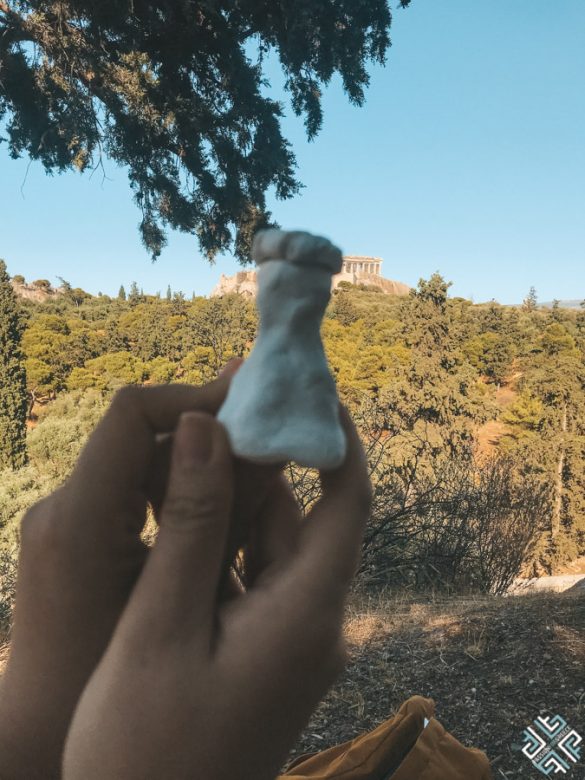 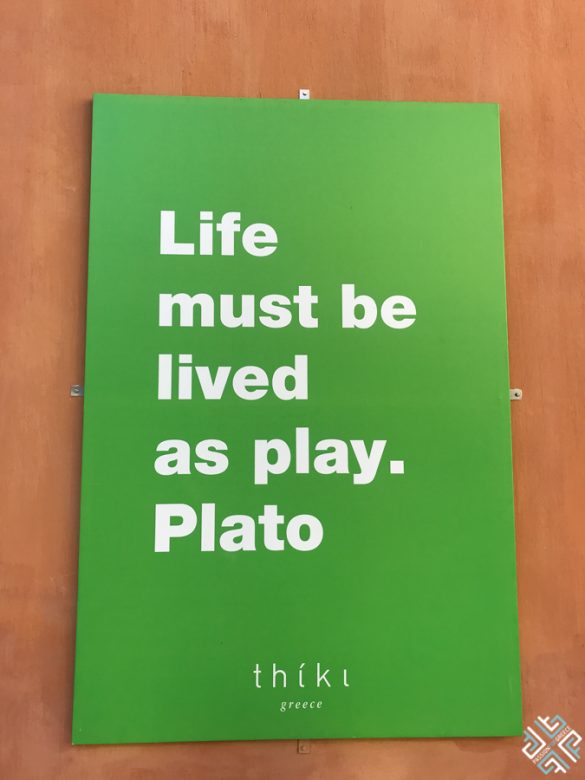 One of the best places to admire the city of Athens is from the Areios Pagos, the hill of the high court in antiquity, situated at the rocky hill of God Mars (Aris). It is here that Apostole Paul preached the teaching of Christ to the Areopagites. 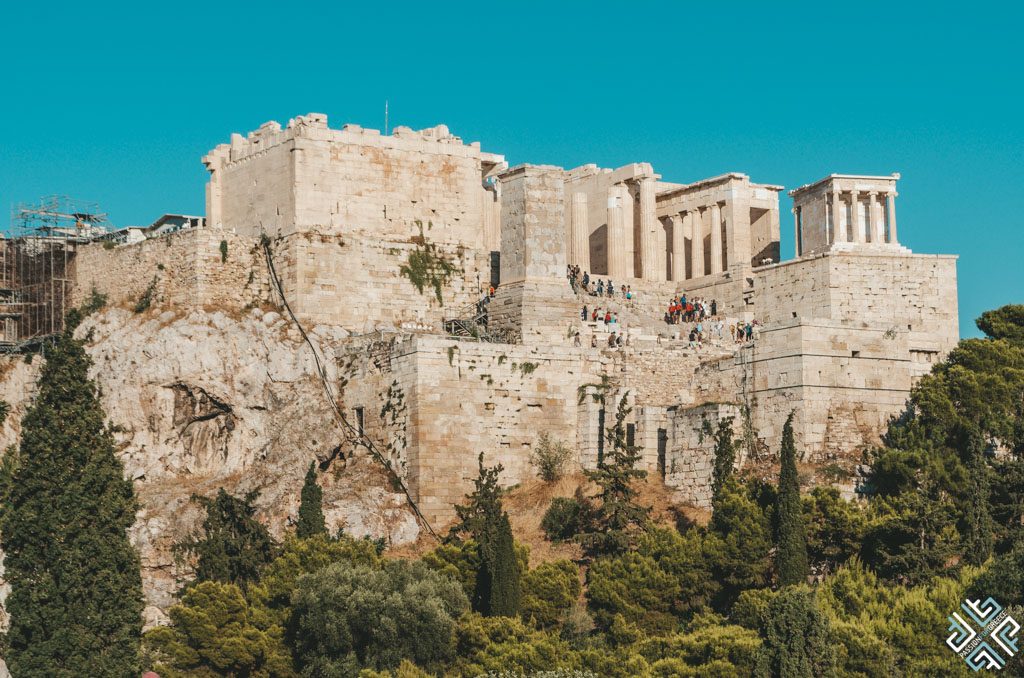 We then slowly traversed through the charming streets of Anafiotika, the quaint neighbourhood that resembles the Cyclades before our final stop for a delightful drink in Athen’s oldest distillery in Plaka — which was a wonderful way to end this gorgeous afternoon in Athens. 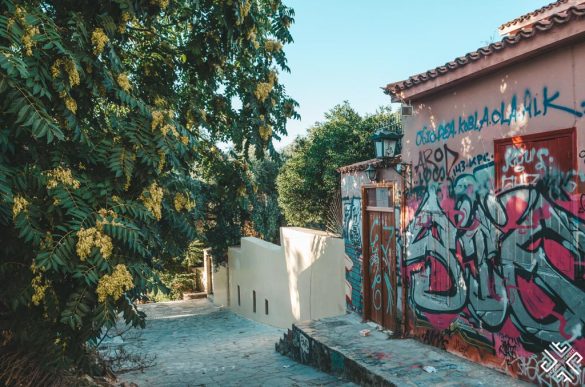 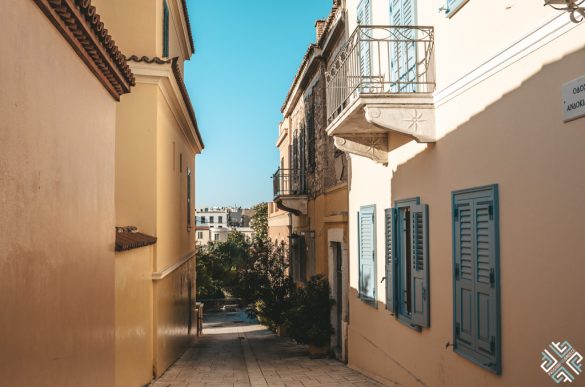 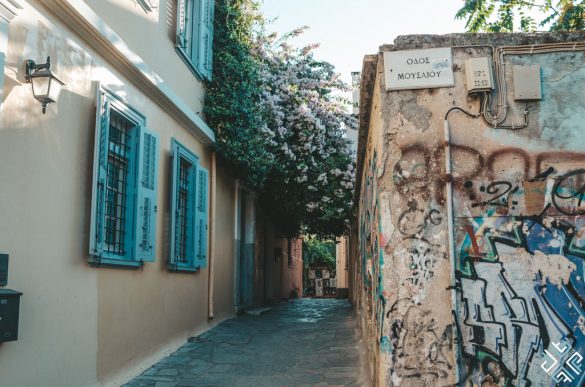 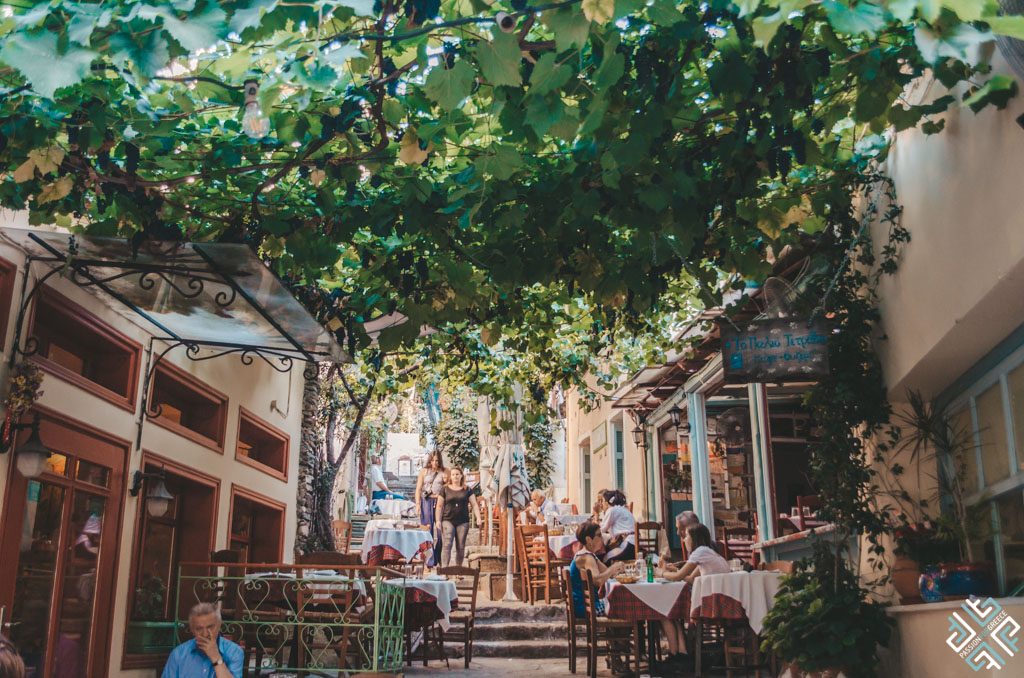 This walking tour of Athens offers a fantastic blend of experiencing Athens’ highlights while at the same time learning all about the fascinating realities of the ancient world. 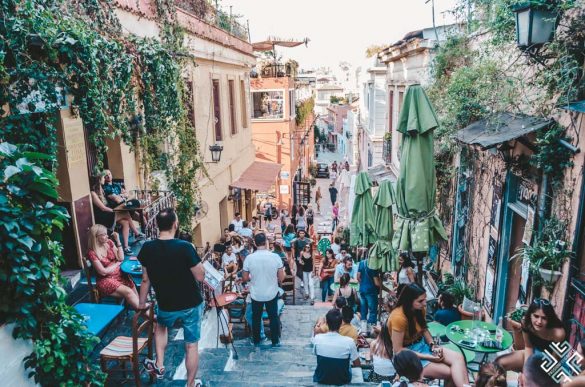 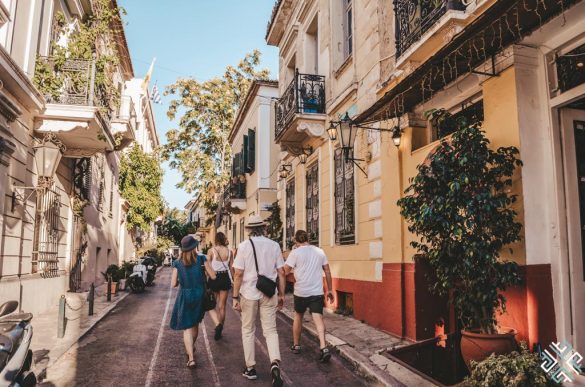 It is for the curious travellers who seek to learn more than just cold facts but rather engage in a delightful conversation which will leave you with a depth of knowledge as well as questions. 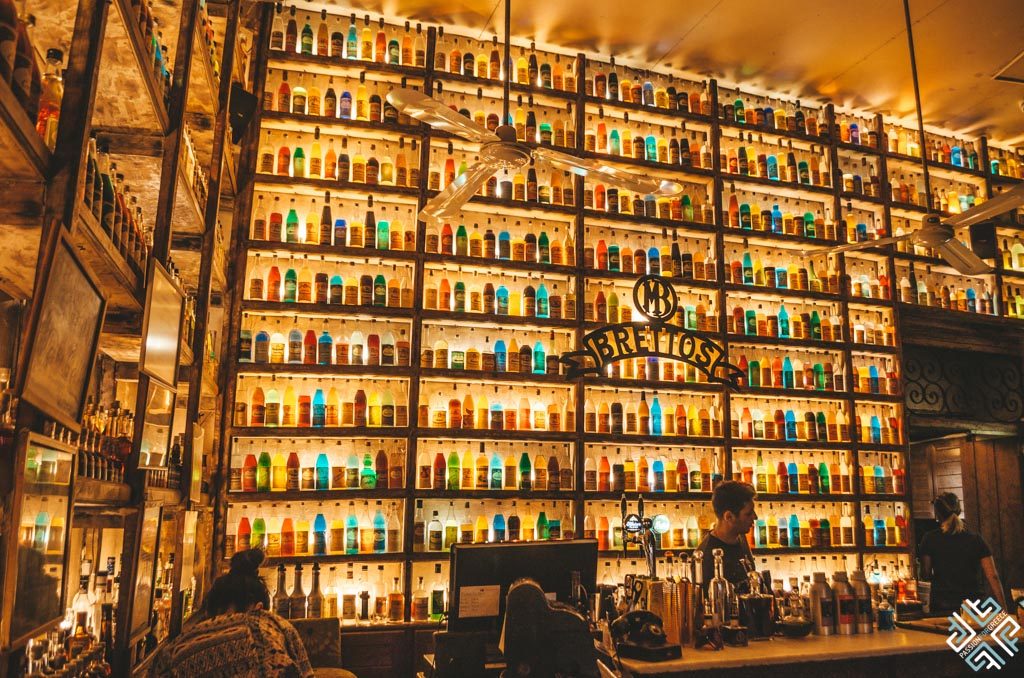 Konstantina is an amazing guide and had some many inspiring stories to share, our conversations left me inspired to learn more about the realms of ancient Greece. This tour is also ideal for families with children as it offers a perfect balance between facts and play. 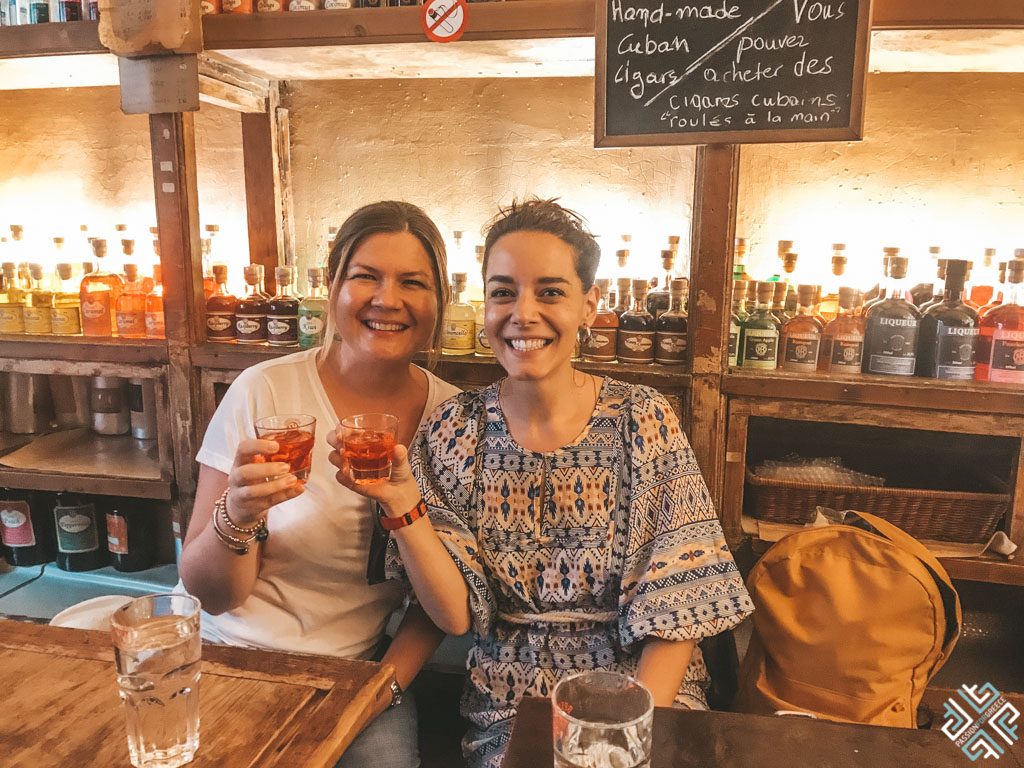