With its rich history, architectural beauty and vibrant lifestyle, Hydra mesmerizes its visitors at all times of year. A much loved destination among foreign celebrities and prominent Greeks alike, this quaint Saronic Island is a short two-hour ferry trip from Athens.  Here are our 15 reasons to visit Hydra right now. “Hydra played a crucial role during the Greek War of Independence in 1821 and contributed greatly to modern Greece” explained the mayor of Hydra, George Koukoudakis as we found ourselves in the exact same office where Miaoulis, the admiral and politician who commanded the Greek naval forces during the Greek War of Independence (1821–1829) sat to conduct strategic meetings for the War at Sea.  Hydra was also the birthplace of 5 Greek Prime Ministers and of the first President of the Hellenic Republic, Pavlos Kountouriotis. During 1960s Hydra became an artists destination when Leonard Cohen came here and bought a house for only one thousand five hundred dollars, where he spent ten years of his life writing music and novels. Every year his son Adam visits the island for his holidays and every two years the Municipality of Hydra together with the Canadian Embassy organize an event dedicated to Leonard Cohen.

Hydra came to fame following a Hollywood movie Boy on a Dolphin, starring Sophia Loren — scenes of which were filmed on the island in 1956. Thanks to this movie not only Hydra but also Greece became known as a tourism destination.

Celebrities like Jackie Kennedy and Aristotle Onassis would spend their summer nights in the famous Lagoudera Club during the 1970s and 80s. Hydra was the Mykonos of that time before the island of Mykonos became a Jet-Set destination it is today. Hydra has managed to preserve its traditional flair as its architecture dates back to the 18th century. Until this day the island is protected by an archaeological law, nothing can be changed in its architectural style and it is forbidden to use solar systems on Hydra. 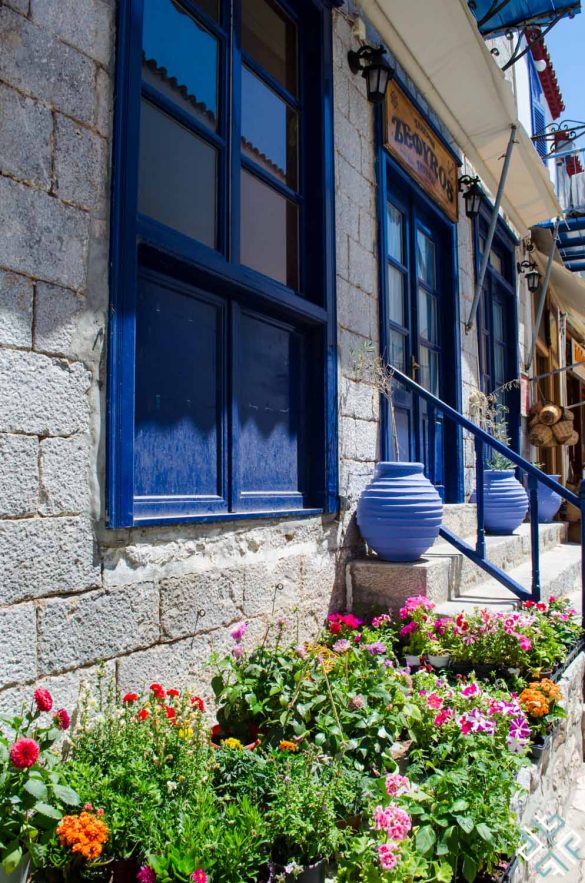 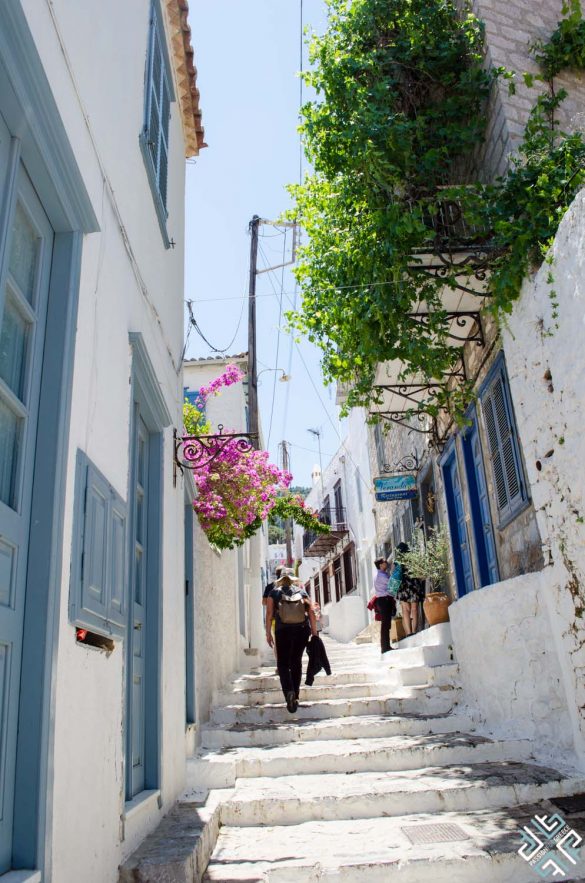 No installation of metal doors or windows in the houses is not allowed. There are no cars or motorbikes on Hydra which protects the island from pollution. Get lost wandering around the charming streets of Hydra, every turn is guaranteed to give you joy.

5. The island of Donkeys There are over 1000 donkeys on Hydra and these cute creatures are  extremely vital to the smooth daily operations taking place on the island. The mules are employed to carry the luggage and transport building material and groceries as there are no other means of transportation on the island. Visitors  can also ride the donkeys from the port and through the cobbled streets of Hydra. 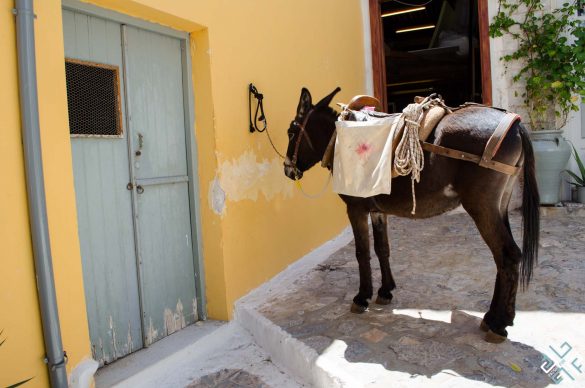 One of the unique activities on Hydra is horse-riding. Head over to Harriet’s Hydra Horses which is a project started and operated by a charming young lady Harriet Jarman, who resides on Hydra from a young age. In fact her project was initiated by taking care of rescued horses from their abusive owners. Harriet organizes daily guided horse trekking tours to Hydra’s monasteries, mountains and beaches.

7. Cats own Hydra, we are just visiting

The cats of Hydra rule the island and are everywhere. They will make you fall in love with them and want you to photograph them with every chance you get — cat person or not! 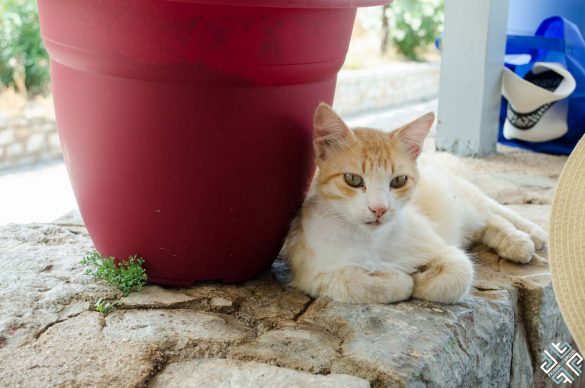 One of the attractions worth visiting on Hydra are the museums, some of which are housed in traditional mansions which once belonged to the shipowners. Located on the premises of the Monastery Ecclesiastic and Byzantine Museum displays canonicals, relics, oblations and icons from the 18th century.

Situated on the eastern part of the Hydra harbour the Historical Archives Museum hosts temporary exhibitions. In its permanent display you will find costumes, gravures and artefacts which date back to the War of Independence. Follow the narrow streets from Platia Votsi and you will reach the best spot to enjoy vista views of Hydra’s harbour.  A bright ochre colour mansion which belonged to Lazaros Koundouriotis is a fine example of the Hydriot architecture.

The mansion is a branch of Greece’s National Historical Museum. Get some sweets from the oldest traditional sweet shop called Tsagaris, which was established in 1930.

10. Monastery of the Assumption of Virgin Mary

Hydra is home to 300 churches and six monasteries which dot the island’s landscape. Hydra’s dominant cathedral also known as the Church of Dormition, is the Monastery of the Assumption of Virgin Mary located in the heart of the Hydra harbor right beneath the clock tower.

The original construction was built by a nun in 1643 dedicated to the Saint Charalambos which was later destroyed in 1774 by an earthquake and rebuilt by Venetian architects and was renamed as the Assumption of Virgin Mary.

11. Beyond the Hydra Harbor

The route from Hydra town to Kamini is definitely worth exploring. It will take you approximately fifteen minutes or so to reach this small traditional fishing village overlooking the Aegean Sea. On your way you can also stop for a swim and later enjoy lunch in one of the tavernas in the area. You will come across some remarkable mansions along the way which make the route even more scenic. 12. The Bastions of Hydra

The Bastions of Hydra were used in the 18th century to protect the harbor from the attacks of the Turkish fleet. The cannons remain here until this day reminding of the historical past. From here you can witness the beauty of the Hydra Town and harbor.

Although Hydra is not particularly known for its beaches like other Greek islands, here are a few that we recommend.

Situated 2 kilometers from Hydra Town this small sand and pebble beach features two tavernas and a refreshment shop. Sunbeds and umbrellas are available for rent. You can get here with a water taxi or walking past Kamini.

Only a short walking distance from Hydra Town you will come across this diving spot which has a coffee shop and bar where you can enjoy a drink and dive right into the sea.

This organised on the rocks swimming spot is ideal for an afternoon swim and drinks while watching the sunset.  Enjoy spectacular views listening to the tunes played by the DJ.

This organized beach is located on the premises of the Four Seasons hotel. A sandy beach with clear waters ideal for families with children.

There is also a taverna right on the beach serving lunch and dinner. Here you can enjoy traditional Greek dishes, seafood and fresh fish. To get here the hotel operates a boat service which runs every hour between Plakes and Hydra Town. The cost is €3 one way or you can rent a private water taxi for €20 one way. This secluded beach is located on the southwest part of Hydra in a sheltered cove shaded by the pine trees. It is an organized beach with sunbeds and umbrellas available for rent. You can get here by boat which leaves from the Hydra harbor across from the clock tower. It takes approximately 30 minutes to get to the beach. Sunsets are spectacular to watch aren’t they? We recommend that you head to Sunset Restaurant to witness a magical sunset on Hydra. Hydra is an island full of charm and over the years the island has managed to retain its unique charter and exceptional level of service. Guests who come to Hydra keep on returning over and over again. It is a playground for aristocrats, luxurious yet affordable.  Want to come here on a private yacht, you are more than welcome to but you can also spend a fantastic holiday without it costing a fortune.

Where to stay on Hydra?

During my trip to Hydra we stayed at the Four Seasons Hydra hotel which is located on Vlyhos beach, which is approximately a 40 minute walk from t Hydra Town or a 5 minute boat ride with a sea taxi (€3 one way).  The hotel features suites which are inspired by the magical colours of the four seasons. The hotel has a private beach which is ideal for those who wish to spend their holiday on a beach resort. 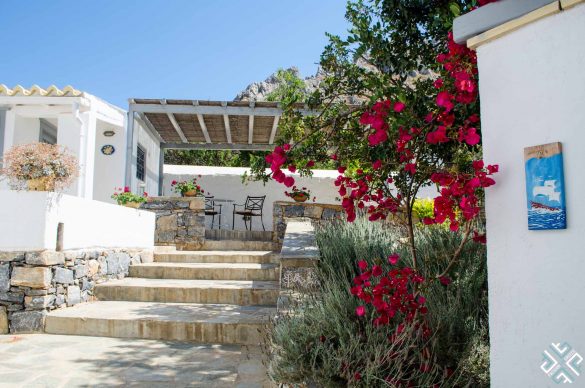 Where to Eat on Hydra? Hydra enjoys a vibrant dining scene with a plethora of family-owned taverns as well as casual, romantic and fine dining options. For the full list check out our previous post Best Restaurants on Hydra.

How to get to Hydra? Get a Flying Dolphin which depart from the port of Piraeus several hours during the day. The duration of the trip is approximately 2 hours.

Driving to Hydra: Although cars are not permitted on the island, in case you decide to drive you can take your car up Metohi in Peloponnese which will take you approximately 1 hour and 30 minutes from Athens, leave your car in Metohi and cross to Hydra with a ferry or water taxi (25 minutes).

We hope that our 15 reasons to visit Hydra have inspired you to pack your bags and plan your next getaway to Greece. Have you been to Hydra? 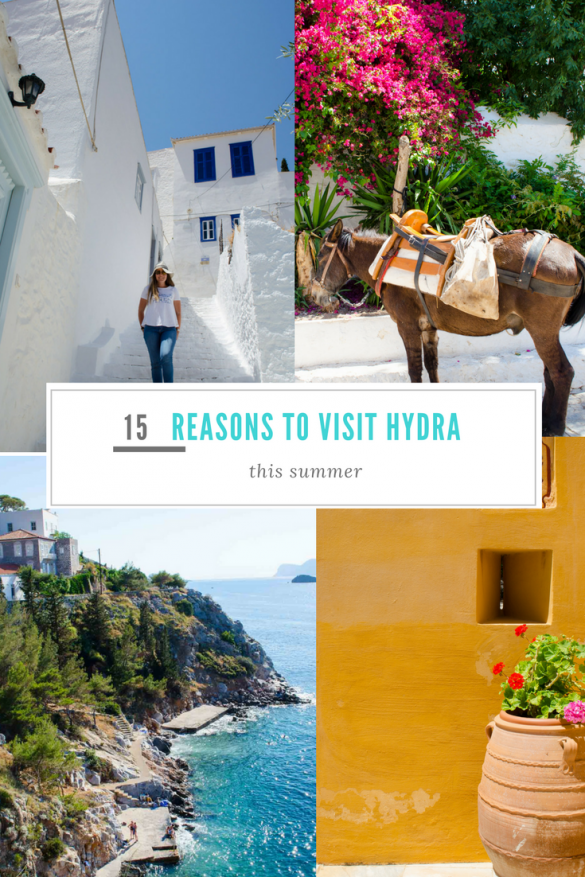 The trip was organised for members of Travel Bloggers Greece by the Municipality of Hydra. All opinions expressed are always my own.

Yacht Charter Greece: Our Sailing Experience in the...