We had taken an instant liking to the island upon disembarking the ferry and decided that this would be the perfect place to spend a week, a month if only we had it to spare. Having stayed no longer than a couple of nights in most of our destinations thus far, we eagerly adopted a routine and reveled in the sameness of it. Once we’d identified “our usual” breakfast spot, distain for day-trippers from the mainland inevitably followed. Most mornings began the same, by ignoring several alarms meant to rouse someone for running. Resolving to exercise later that afternoon, we would stroll into town to stake out the ideal bench seat facing the water and place what we liked to think of as our regular order, but which our waiter refused to register any recognition of. Propped by pillows and supplied with bottomless frozen coffee drinks, we watched our tiny slice of the world go by. 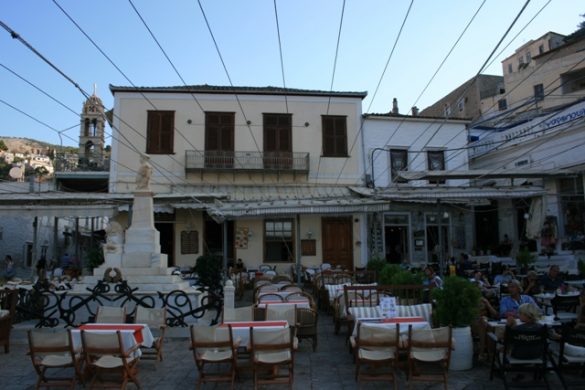 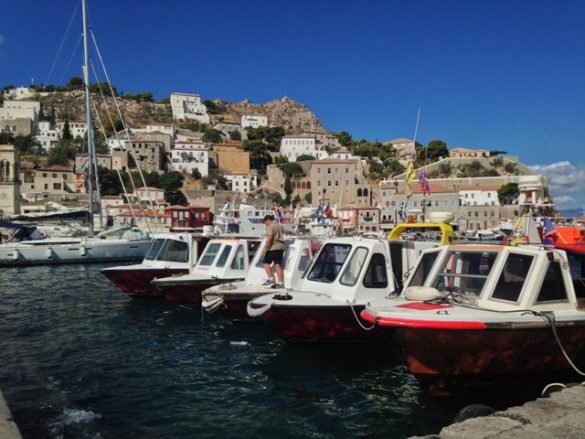 Each morning, an elaborate system of pulleys would draw canvas awnings across the square, from building to water’s edge, protecting cafe patrons and street-strollers alike from sun and occasional rain. You could easily wander from end to end, window shopping the boutiques and browsing menus, without once being reached by direct sunlight. As the sun falls behind the hills surrounding town, the shades are recoiled. If you hadn’t seen the waiters in action, cranking handles and pulling ropes like sailors changing course, you might have wondered if you had turned down an alley and ended up in a different harbor town altogether. The donkeys had retired to their stables on the outskirts of town and the coffee sipping crowd had morphed into the cocktail nursing kind, but their preoccupation remained the same: idle observation of passing couples, catamarans, and stray cats. The only set who might have it better than us were the stray cats and dogs of Hydra. Occasionally you’d see one with the poor fortune of an owner, struggling in vain against a leash. Even if some had the marks of a few street fights, they were free to wander and make carefully calculated imploring faces, resulting in their getting fed 10 times a day. Hand pitted olives, freshly carved chicken from the spit, no end to feta cheese… It was mid-week in September, safe from Europeans on August holiday and weekenders from Athens. There was a sizeable yachting contingency but they seemed to prefer cocktail hour on their sun decks and who could blame them? The shops along the waterfront clamored desperately for their attention. After all, these were some of the last days of the year they could hope to sell entirely white outfits of loose fitting cotton and 300€ bikinis. You could easily imagine what it might be like in the height of the season. The bars still blasted dance music into the square, hoping you might not notice that literally no one was inside. The one that lured us in had a female-fronted, bespectacled, Rolling Stones cover band. We enjoyed our wide choice of seating and direct views of the band and confirmed that we really were as smart as we thought we were, avoiding the summer crowds.

With the luxury of a week we were released from the guilt that comes along with spending an afternoon not doing much of anything. 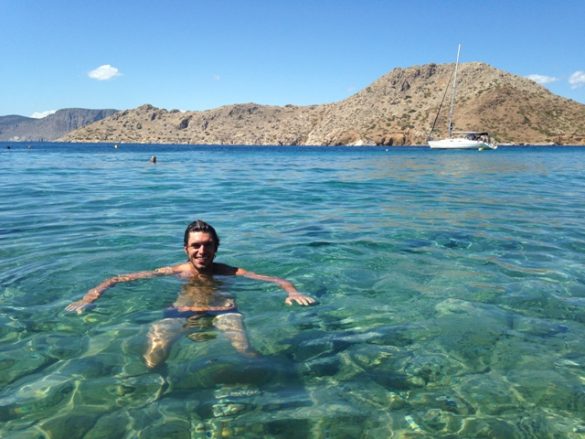 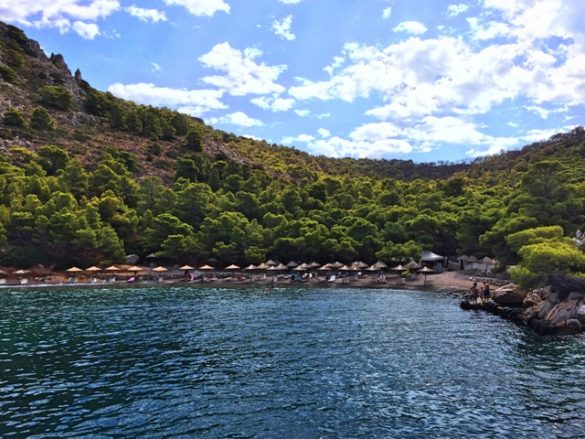 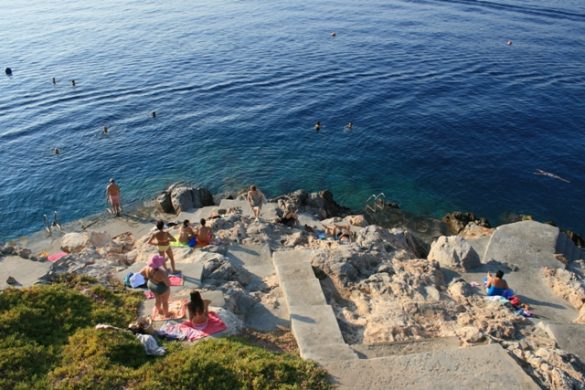 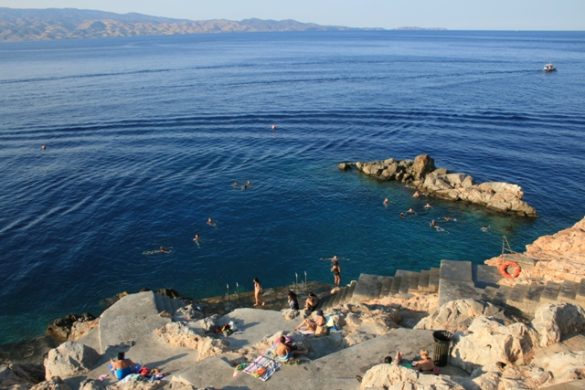 Most days we took a water taxi to a nearby beach, alternately swam in the crystal clear, green water and read books in the sun, and then headed back to town in time to watch sunset from the rocks just outside of the harbor. A rough swimming platform had been carved out of the rocks to host families, older couples sharing a bottle of wine, and the occasional interloping tourist. We swam out far enough to avoid the splash zone of cannonballing children and watched the sun sink into the island next door. After accidentally stumbling upon this magical intersection of time and space, we made it a point to come back almost every day. Evenings usually began with a drink at Pirate Bar in the town square. Our waitress reminded me of a friend who had likewise visited a Greek isle, fallen in love, and returned to live and work at his family’s establishment. Surely she was the envy of all her friends, but the only one brave enough to dare imagine her life could be different. Soon enough we began our nightly tour of the winding side streets, looking for a place for dinner. Fairly confident in the fact that it was impossible to get lost, we would turn down alleys at random until one inevitably opened up onto a plaza, brightly lit and bustling with waiters attending to their diners. Beneath a ceiling of vines laced with lanterns, a maze of tables filled the open space, right up to the doors of the neighbors across the way. But they weren’t about to miss out on the action; they had set up their own table to play cards and drink wine, enjoying all the ambiance and none of the cover charge. 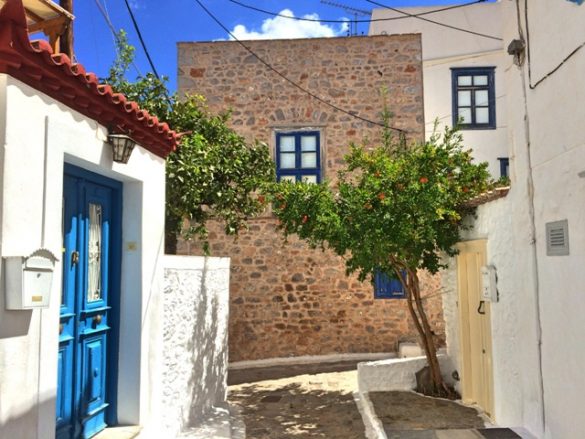 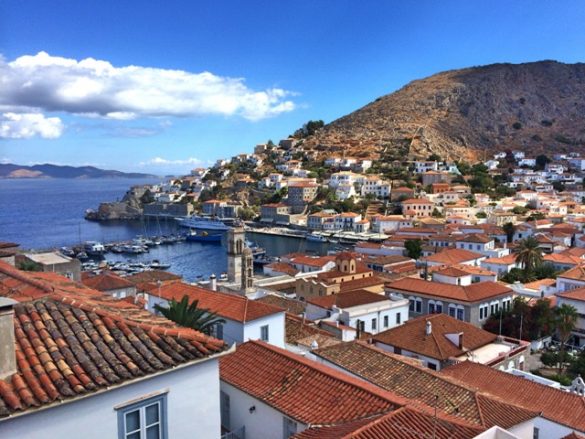 The proprietress of our favored taverna was refreshingly inhospitable in the American sense. She made no effort to smile or greet her patrons. She knew some of them well enough to launch abruptly into conversation without pleasantries; or so I guessed, expertly interpreting Greek. Upon our arrival she simply pointed to an open table, confused as to why we needed her direction in the first place. Ten minutes later, menus were air-dropped on her way to another table and thirty seconds after that she had pulled up a chair and was seated next to us at the table, pen poised to take our order. Without introduction, she began to list foods, we figured those available from the kitchen, and then fell silent, seemingly content to rest her feet as we debated over the calamari and whether we’d finally exhausted our appetite for tzatziki. It was brusque and patient at the same time, blunt and briefly intimate. In tourist-centric Santorini, waiters stood at attention at the entrances to patios overlooking the ocean. They wore a static grin and asked mid-meal how everything was tasting. Here, in the middle of the street she had claimed as her own with folding tables, smiles were only doled out to those who earned them. As we got up to leave on our final night in town, we made a breakthrough. A man, trying far too hard too keep up with his fashion-forward girlfriend, strode by in a light pink linen jacket. She turned from her perch on the arm of another diner’s chair and snickered to us, “What on earth is that guy wearing?” It was the kind of thing you’d try desperately to turn into an inside joke if you ever saw her again.