Planning for our trip to explore the Stockholm archipelago which was going to be with a boat, I had visualised your typical type of boat which gradually takes you to your destination, where you can sit and gaze around and happily snap away without worrying that your camera will fall overboard. As we arrived in the morning to our departure point we were met by our two lovely guides of Öppet Hav AB, Hanna and Andy and instead of finding ourselves in front of a touristic boat — we were told to dress up in matching black outfits to board a sleek black RIB-boat. All equipment and cameras included had to be stored away safe as we cruised with the speed of 60 knots through the Baltic Sea!

Getting ready to depart in our RIB boat 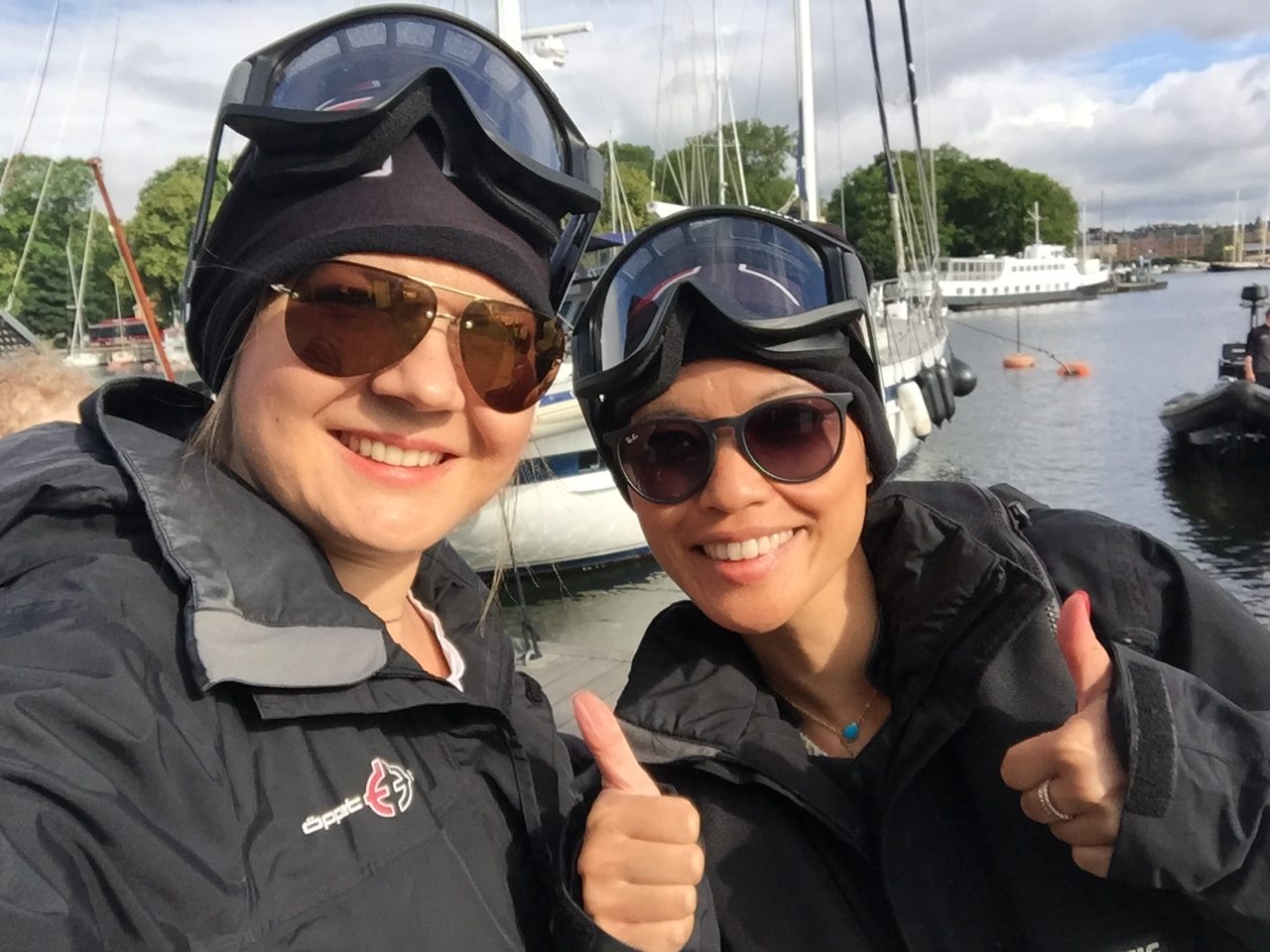 We called ourselves Bloggers Undercover as myself and 9 other bloggers set out on a sea trip — an experience of a lifetime.

Bloggers undercover traveling on a Rib boat 57 knots per hour! An adventure of a lifetime @visitstockholm #tbexstockholm

The Stockholm archipelago boasts an impressive collection of 30,000 islands, islets and skerries which can be visited on a white archipelago boat as many are suitable for day trips.

Some of the islets are ideal to spend an overnight either in a hotel, youth hostel or a cottage and this was exactly what we did as we spent an overnight at the Sandhamn Yacht Hotel which I will share with you in a separate post.

As we made our way out of the city centre of Stockholm, Hanna explained that many Stockholmers own their private boats and children learn sailing from an early age. It is something very common for a Swedish family and this explains why the islands are popular among the boat-owners.

Utö – the island of love and children

Utö is the largest island located at the southernmost part of the Stockholm archipelago, the first stop on our trip. As we arrived at the harbour we were met by Malin Lidström a representative of Utö Värdshus — an old mining office which is now a very popular restaurant on the island. Malin was not alone, as she introduced us to a sweet lady with two piggy tails called Charlotte Schröder we knew that the stories that we would hear today — would be unique in every way.

View of the Utö harbour

Charlotte wears many hats, from teaching western riding, carrying out the dues of a wedding officiant during the summer months, veterinary nurse when needed and last but not least an authorized guide. As we sat around Charlotte she explained that Utö is the island of love and children.  There are 223 full time residents on the island, 47 dogs and 6 goats which according to Charlotte are more than enough. Goats are not particularly welcome on the island and Charlotte is rather not fond of them — she made it clear to us.

Charlotte with Emily and Vanessa

Utö welcomes 300,000 visitors per year, 90% of them are from Sweden. In the 1890s the island became a popular resort for the famous people when Mr Levine Ranger a renowned architect acquired the island and  built 5 hotels and small cottages to welcome the island’s eclectic guests. Utö was a summer destination for famous writers and artists.

Charlotte tells us about life in Utö

Another interesting fact which we learned from Charlotte is that there were more boys born in Utö than girls and the reason being that the water which came from the mines contained iron, silver and zinc which apparently affected the birth gender. Nowadays the locals drink desalinated water from the sea thus more girls are being welcomed into the families.

The history of mining in Utö

A water-filled open-cast mine which is visible today

Utö belongs to big companies and families, who owned the oldest mines of Sweden, there are currently three owners who employ the residents of the island. There is one main road on the island which is approximately 14 kilometres long. Mining on the island dates back to the 12th century, in the 17th century there were 9 mines on Utö. Cleaning the mines from water and ice was always considered a challenge and working in those mines was quite dangerous. There were traces of numerous accidents which resulted from excessive drinking.

Like other locals, Charlotte told us the story about the invasion of the Russians and it was quite amusing to hear the phrase over and over again “When the Russians came…”  Well the Russians did come and it was back in the early 17th century when they invaded Utö, burning buildings and destroying the mines.  During those days mosts of the islanders fled the island.

Today the mines are no longer operating yet visitors can witness their traces as there are a few water-filled open-cast mines still present on Utö.

Those who love berries will appreciate the variety which can be found here. As Charlotte took us on a walk around her island she showed us the different types of herbs and berries which grow in Utö. We also got to pick and try the wild strawberries.

Once we completed our guided tour and said goodbye to Charlotte, we joined Marlin for  lunch at the island’s most famous restaurant — Utö Värdshus which once operated as a factory.

For starters we tried the famous pickled herring bites with different sauces, served with freshly boiled baby potatoes, finely chopped onions and delicious bread rusks. For the main course we had fresh fried sea trout served with potatoes and a delicious caviar cream sauce. We also enjoyed some white wine before continuing with our tour.

Boiled baby potatoes on the side After our delicious lunch we had just over an hour to explore Utö before heading to our next destination. Some of the members went on a bike ride to the other end of the island.

Vanessa and Carey ready to take off with their bikes Happy swimmers on the other side of the island

Natasha of the Boho Chica Travel Blog and I decided to skip the biking and went hiking instead. We got lost on our way back as we were chatting about blogging and stuff, don’t ask how we managed to do that but we quickly found our way back.

The woods in Utö. This place reminded me so much of Russia, the same flowers, plants, it felt like a déjà vu. There we were @thebohochica walking and talking about blogging and Dubai and we kind of lost track between the hiking trails, but in the end getting lost is the excitement of a new adventure! #tbexstockholm @visitstockholm
A photo posted by Elena Sergeeva (@elenaserg) on Jul 12, 2016 at 3:18pm PDT

Apparently we were the first group of travel bloggers to visit Utö which was a great honour. It is indeed a great summer destination and if you do decide to go make sure to try out the RIB-boat experience. Me and my p Marissa having fun in Utö

For more information about Utö you may visit their website.
Our trip was part of the TBEX Conference, organized by Visit Stockholm.