I always feel that once in a while we should become tourists in our own city, and spend a day exploring the hidden gems, interact with others who definitely know something that you don’t, open your eyes to the surroundings and learn. Learning is a never ending process. On a beautiful Friday afternoon my friend and business partner Marissa and I were invited to get a taste of Athens, Art and Culture combined, a tailor made experience organized by Discover Greek Culture. Our guides for the day were Sotiris whose academic background is in history and archaeology, thus he is the one who will make sure that you learn quite a few interesting facts about Athens and its history, and Michael who is the man in charge of Marketing and Sales Coordination made sure that we had a very memorable experience. Our meeting point was the Syntagma Square which is the main square of Athens and the one that received its name from the Constitution that the first King of Greece Otto was obliged to grant. Here you will find the Greek Parliament building which initially served as a palace of Kings Otto and George I. From here we headed down to the Ermou street which is the central shopping street of Athens and is one of the first three streets that were designed in modern Athens. 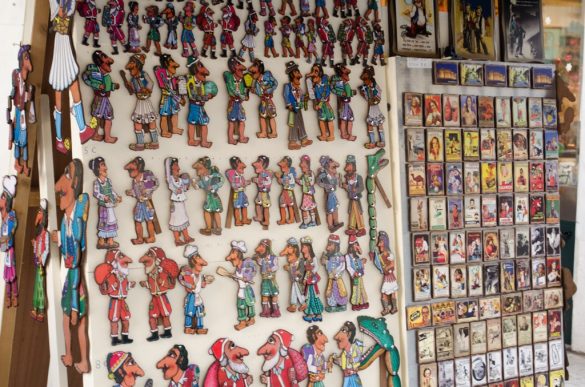 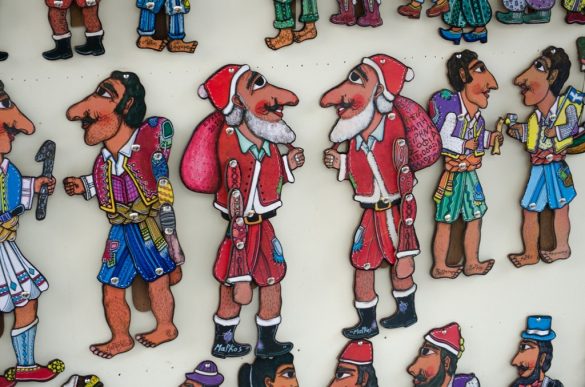 The name Ermou or otherwise known as Hermes in English was named after the ancient Greek God Hermes who was the God of trade; therefore it is quite common that many of the commercial streets in Greece carry the name of Ermou. The street was very busy as all the Athenians were rushing to buy Christmas presents just before the holidays. Our next stop was at the Church of Panaghia Kapnikarea which is found right in the heart of the Ermou Street, and impressive monument dated to the Middle-Byzantine period. In 1834, the building was in danger of being demolished as the newly-established Modern Greek State decided on the new layout for the Greek capital with the plans of having the Ermou Street extend straight forward and exactly aligned with the Palace’s central entrance, thankfully the destruction was avoided thanks to the father of King Otto. What is unique about this church is that it stands one level below the main street of Ermou and the dome is held by four uniquely decorated columns. At the Egg studio with Paris Koutsikos and Daniel Egnéus

We then followed Sotiris and Michael down the main street of Agia Irini square surrounded by many impressive old buildings and just around the corner we found ourselves in a modern art studio which is shared by three artists called the Egg Studio. The studio resembled a New York loft, very spacious and bright, with large windows and an impeccable view of the Acropolis. We were greeted by Paris and Daniel who spoke to us about their work, how they met and what inspires them. 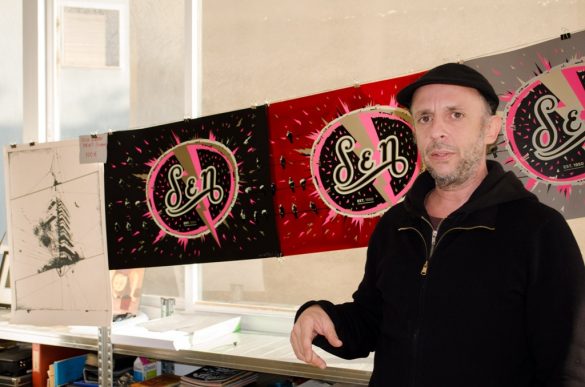 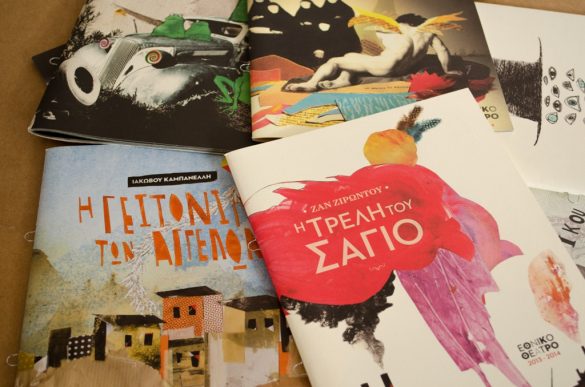 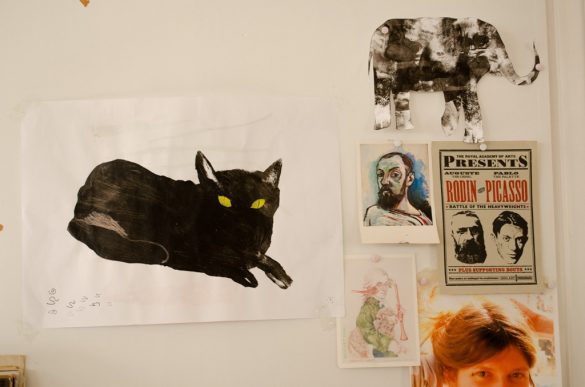 Paris Koutsikos is a Graphic Designer who is mainly active in editorial design, collage and silk-screen printing. He has also designed a number of covers for the National theater. When we asked Paris about where he gets his inspiration he told us he really loves to recycle and use various materials to create his works of art. He doesn’t start any project with a vision, instead inspiration comes along the way and sometimes even in his dreams. Daniel Egnéus is originally from Sweden, before moving to Athens he lived in various parts of Italy where he met Paris’s cousin and that’s how he ended up discovering Greece. For Daniel, Athens is a “hidden pearl” that he has grown very fond of. Daniel’s style of work is a rich expression of colour which involves the use of crayons, watercolour and ink pens which he then scans and elaborates on using various graphic techniques. His work is very dreamy and a reflection of a childhood imagination with a twist of modernity, definitely not something that you meet every day. Daniel has a very rich portfolio of successful collaborations and representations in top Art cities of the world. He has also published many books and one of his latest is the Little Red Riding Hood, which has been crafted in a gothic interpretation portraying society’s modern girls. Having thanked the artists for their wonderful hosting and inspirational knowledge that we gained our next point of interest was the Roman Agora. One of the most prominent sites of the Roman Agora is the Tower of the Winds which lies to the east of the site. Officially it is called Horologion which means clock, and it contained a water clock to measure time with the necessary accuracy. Exactly across from this Tower lies the gate of the Madrasah (or Medrese), which was the Islamic school of Athens during its occupation by the Ottoman Turks. The school was then moved somewhere else and the building was turned into an Ottoman prison. Tower of the Winds Madrasah was an Islamic school during the Ottoman occupation

We then walked on passing the Anafiotika which is a tiny neighbourhood which is part of the historical Plaka and lies on the northeast side of the Acropolis. Another point of interest that we visited was the Monument of Lysicrates which was the first Greek monument built in the Corinthian order on its exterior. In 1658 a French Capuchin monastery was founded by this site and later on in 1669 the monastery succeeded in purchasing the monument.

What we also learned is that the name cappuccino a coffee that we all greatly enjoy was originally named after the Capuchin friars. Our final stop was at the Fine Wine – Wine Store which is located just across the road from the Monument of Lysicrates, where we had a wonderful wine tasting session. We were warmly welcomed by Sofia who runs the wine store with her family since 1998. Sofia is a former journalist who is now pursuing her passion for wine full time. The first wine on our list was a dry white Semeli Mantinia Nissiakos which is elegant in floral aromas with lemon, citrus and rose petals. This wine is rich on the palate with a long aromatic aftertaste. The next wine was presented in a very impressive blue glass bottle, the Santorini wine produced by Gavalas winery which is a dry white wine produced from the native variety of Assyrtiko carefully selected from the traditional vineyard of the island. It is a very distinctive white wine featuring delicate aromas of fruit – pear, lemon and pineapple. The wine is smooth, rich, fruity and full-bodied. The red wine then followed with an exceptional selection of Kir-Yianni Estate a great vintage 2011 with complex red fruit aromas, 40 % Xinomavro, 60% Merlot, full bodied and balanced. We didn’t stop just there; it was now time to dry the rose. Sofia presented us with the Adoli Ghis Rose, an impressive strawberry coloured wine with emerging fresh fruity aromas, good body and crisp acidity. The warm and welcoming atmosphere made us feel very much at home, other than the wine we also tried cheese, rich Greek olive oil impressively packaged with a catchy name Tou Pappou, translating the grandfather’s from Greek and the best cherry tomatoes that I couldn’t get enough of. With my friend Marissa of My Greece, My Travels We toasted to Happy Holidays with a glass of sparkling wine from a new winemaker Debina from the vineyard of Zitsa located in the greater Ioannina area located north-west of Greece. A big thank you to Discover Greek Culture for organizing this memorable day. With Michael and Sotiris from Discover Greek Culture and Sofia

For those who are planning to spend two days in Athens, check out this post in Spanish, here.  Check out the  three day Athens itinerary.