The two-day luxury conference held in Athens on October 13-14 at the Hotel Grande Bretagne was the platform for global industry leaders to interact and exchange their views in regard to the latest hospitality market challenges and opportunities. Co-organized by the International New York Times and the Ecole hôtelière de Lausanne, on the occasion of the Luxury Hospitality’s second event, gave an opportunity for the global delegation of industry leaders to explore the opportunities the Mediterranean region has to offer.

The event was chaired by Varun Sharma, host of Inside Luxury Travel who added a great amount of positive energy throughout the two days. Minister of Tourism, Olga Kefalogianni addressed the delegates noting that the image of Greece has significantly improved and that the country is focused on reviving the regions and creating “tourism economic contingencies”. She also stressed that the country’s aim is to develop a “step by step strategy” to create a friendly environment for foreign investments, removing barriers. She pointed out that actions have been taken on the diversification of the tourism product through the promotion of Greece as a medical, wellness, cultural, agro-tourism, yachting and culinary destination, as well as others. The Minister mentioned the government’s plans on setting basic guidelines toward facilitating the development of high-end resorts and holiday homes, featuring state-of-the-art golf courses, marinas, conference facilities, and other services.

Eftichios Vassilakis, Vice Chairman, Aegean Airlines and Olympic Air pointed out that the establishment of direct routes to Greece can support the development of Greek ecomony and the tourism industry. He also mentioned that there is expected to be 70 direct connections in the next three years. In a discussion looking at the global view of the Mediterranean as a “single region”, Dr Andreas Andreadis, President of the BoD of the Greek Tourism Confederation (SETE), expressed his disappointment in regards to the non-existent visa strategy brining up the example of the electronic visa ESTA used in the USA. He acknowledged the fact that there cannot be a Mediterranean strategy unless there is an EU strategy in place, pointing out that there is currently a different level of attention given to the visa issue in various EU Member States, which is very important for tourism.

Panos Livadas, Secretary General of the Greek National Tourism Organization (GNTO), spoke on the current campaign “The Return of the Parthenon Marbles. Coincidentally Amal Clooney, the human rights lawyer, advising Greece on the return of Parthenon marbles to Athens, was staying at the Hotel Grande Bretagne during her three day visit to Athens. 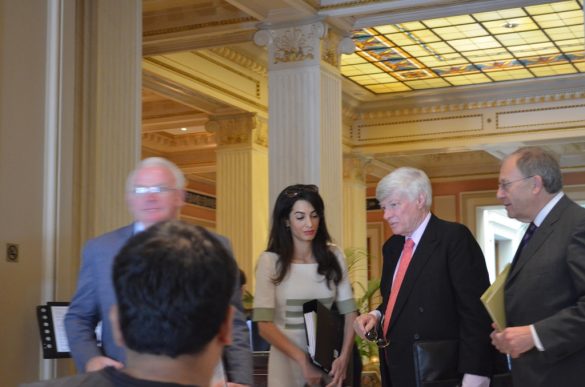 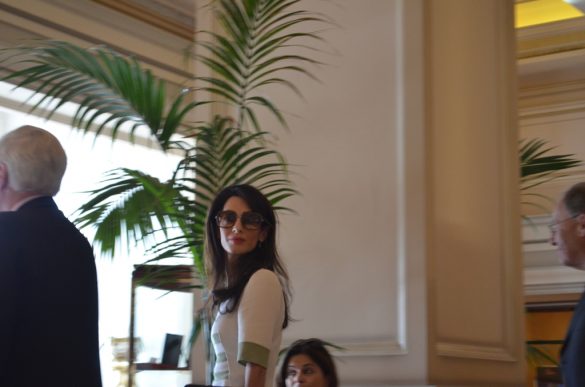 Livadas also mentioned the “incredible new development” in regards to the recent archaeological discoveries of Amphipolis. Giorgos Kaminis, Mayor of Athens, spoke about Greece’s “impressive comeback” with a 30% increase in international tourism arrivals, one of the largest growth rates recorded globally. He also mentioned the development plans of the Athenian Riviera for “our high-end visitors.” During the two-day conference, Professor Samad Laaroussi, Holder of the Chair of Luxury Hospitality, Ecole hôtelière de Lausanne and David Sadigh, CEO of the Digital Luxury Group, presented the World Luxury Index Hotel 2014 report, showcasing findings from over 485 million online searches on 70 brands in 20 markets. An increase of 7.7 percent has been identified on the growth of consumer interest for the luxury hospitality industry, with a major influx coming from the Chinese market at 39 percent. Findings have shown that the most sought after Mediterranean Destinations are Rome (22 percent), Barcelona (14 percent) and Istanbul (13 percent). Athens has shown a significant increase of search at 29 percent.

The World Luxury Index Hotel 2014 report also showed that USA continues to be the leader in the luxury travel market with more than 50 percent searches. Hilton Worldwide (Waldorf Astoria), Starwood Hotels & Resorts (St. Regis) and Hyatt were the most-searched-for luxury hotel groups, while the fastest growing company is the Shangri-La Hotels and Resorts, with its top five destinations being Singapore, Paris, Shanghai, Bangkok and Dubai.

On the subject of the new concept of luxury, Tonino Cacace, Partner and Chairman of Capri Palace spoke on the importance of going “into the direction of simplicity where there is the passion of the owner and the staff behind it”. He agreed on the point made by Dr Andreas Andreadis, President of the BoD of the Greek Tourism Confederation (SETE), that there must be a separate marketing strategy for Southern Europe.

Kerry Smith, Editor in Chief of High life, BA Magazine in conversation with Varun Sharma, Inside Luxury Travel spoke about ways of getting into the pages of the glossy Travel Magazines, making an interesting point that the new generation is the “Generation Curious” and it is a “state of mind”. These are the type of travelers who want to “skin the place”. Furthermore, Abid Butt, CEO of Banyan Tree said that “travel is a lot about anticipation and how you attract your reader to the destination is very important.” On the topic of Technology and Asia as well as how hoteliers can use these tools to better connect with their guests, Mr. Butt stated that “technology made us very dependent on smart phones”. And that those who are interested in entering the Chinese market must use the “equivalent tools” that are available on the market and that the Chinese trust. Duncan O’Rourke, COO of Kempinski Hotels agreed that “the industry has to be more active in investing into technology”.

An interesting presentation on happiness in the workplace and what it achieves, was made by Nic Marks, CEO of Happiness Works. Nic Marks stated that “Happiness is a social emotion” and your mood can affect 2,000 people, and because “happiness is visible” the 5 rules to Happiness in a workplace are to connect, be fair, support, challenge and inspire. On the subject of Hotel Investment, Nick van Marken, Global Head-Hospitality, Deloitte LLP pointed out that the Qatari have become the major industry investors, with some 7 billion Euro being invested into the European Market. He also mentioned the recent acquisition of the New York’s Iconic Waldorf Astoria become the world’s most expensive hotel after being sold to Chinese firm for just under $2 billion.

Katerina Katopis, Investor Relations and Marketing Director of Dolphin Capital Partners explored the subject of offering high-end real estate deals to maximize room revenue. She gave the example of the Amanzoe entering the Greek market and the response to this venture. John Spense, Founder, Chairman and CEO of Karma Royal Group shared his success story on operating 24 resorts on four continents, with zero debt or collateral and how he sees his investment into the backpacker market create a customer base that will, in a few years time be of a higher financial status, thus being able to afford the next level of accommodation.

MPS Puri, CEO of Nira Hotels put an interesting perspective on the current Chinese tourism trend, and although 200 million Chinese visitors were expected to book their trips abroad, at the moment it is too soon to tell the exact number of these guests who would actually be luxury travellers, saying that there were other nationalities who prevailed and there are others who will follow.

The subject of recruitment and selecting the right staff was elaborated on by Derek Picot, Vice President and Regional General Manager, Europe of Jumeirah who mentioned that 35 percent of their staff has been with the company for over 10 years and that it is very important to “recognize the length of service” as well as to “recognize those who want a career”. Deepak Orhi, CEO of lebua Hotels and Resorts said that the company’s “innovative mean” is their customers and that they learn from them without having a Human Resources Department in place. Mr. Ohri stated that the key is to “look for passion” and not “for skills”. 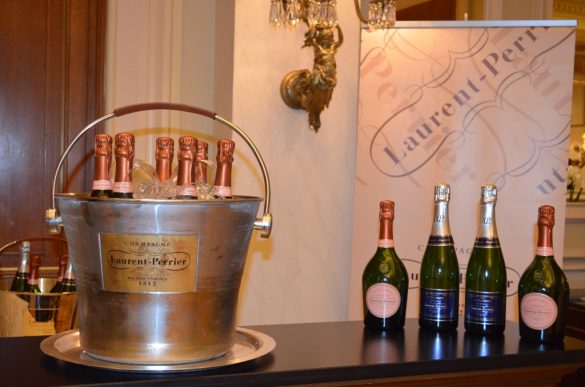 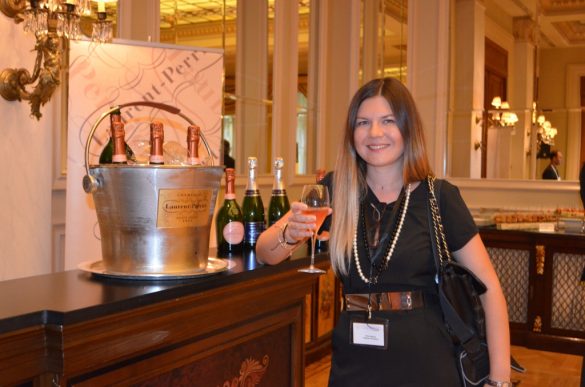 To mention a few highlights of the event: the luxurious rose Laurent Perrier champagne, one of the sponsors of the Luxury Hospitality 2014, that made the coffee breaks and lunches all the more pleasant, the interesting Olive Oil and Hot Potato Test presented by Aris Kefalogiannis, CEO of Gaea Products S.A. that showcased the uniqueness of the Greek olive oil and the remarkable private event organized at the Acropolis Museum with a private evening tour of the museum. 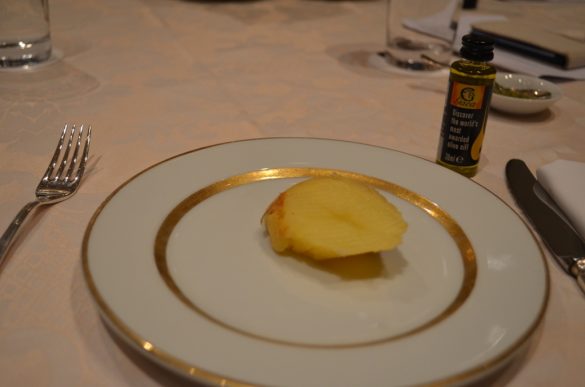 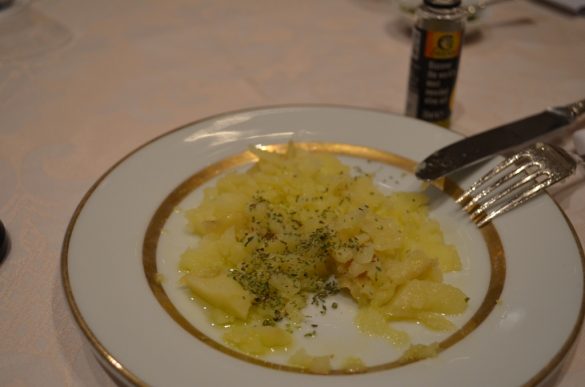 Private event at the Acropolis Museum So what does Luxury mean in Hospitality? Though most agreed it was an ‘experience’ to offer to guests, many also believed, that according to the country, culture, heritage, luxury can mean many things. But regardless of the difference in cultures, luxury and experiences it definitely means service. And quoting Mr. Varun Shamra “Service is King!”