What I learned from Holton Buggs

Last Sunday I was invited to an event organized by Organo Gold which is a network marketing brand that sells coffee. Although I am not the kind of person that would join such an organization, and I am not saying it to discourage anyone who is involved in this means of doing business, but I have come to that point of my life that I would like to be an Entrepreneur rather that a good sales person for someone else. Now back to the subject of why I actually attended the event, well that’s because I enjoy listening to the ones who succeeded, their experience and advice they have to give. On this occasion the speech was delivered by Mr Holton Buggs, Executive Vice President of International Sales and I would like to say that I really enjoyed his speech.

Holton Buggs has been involved in Network Marketing for the past 24 years, and when you hear him speak, the passion is definitely there and if you are ready to really listen, you can definitely walk out of there with a few ideas and enough motivation to apply to your life and business.
Mr Buggs spoke about the three principles of the way the Company operates and why it can be seen as an attractive opportunity for some.

Unlike in the Corporate World there is no picking order to who will succeed
2. This business is affordable for an average person
3. 18-24 months action plan – Mr Buggs pointed out a few facts. He mentioned that there is an average monthly spending of 100$ on Starbucks, so what this means is that coffee drinking is a habit. No one needs to change their habits. The coffee drinking society is already there waiting to be approached.

Coffee is a habit that is consumed about 3-5 times a day, and this is something that I can confirm being a coffee drinker myself. Coming back to the example of Starbucks or any other company selling coffee, a 07 cents raw materials cost can bring 15$ in sales.

Mr Buggs had promised to let his audience in on the Secret of his success. And his message was “The secret is that there is no secret” Instead he gave a clear example of how he started with the company and how he decided to treat his investment as a million dollar investment. What this meant for him is that he was not putting of his meetings for tomorrow or the day after, he made sure to squeeze as many meetings as possible in 24hours.
He gave an example of owning a Toyota or going for a Lamborghini. He asked the audience how they would treat their Lamborghini. The audience confirmed his theory that they would treat and take care more of their Lamborghini than they would of their Toyota because it is a Dream Car. The message here is: What value do you give to your business? Do you treat it like it is a million dollar investment or a 1500$ investment. What Holton Buggs also said is that the Lamborghini people, referring to the successful people usually are happy to share their success and speak openly about their experience. It’s the Toyota mentality that keeps everything to themselves and don’t like to share their secrets. 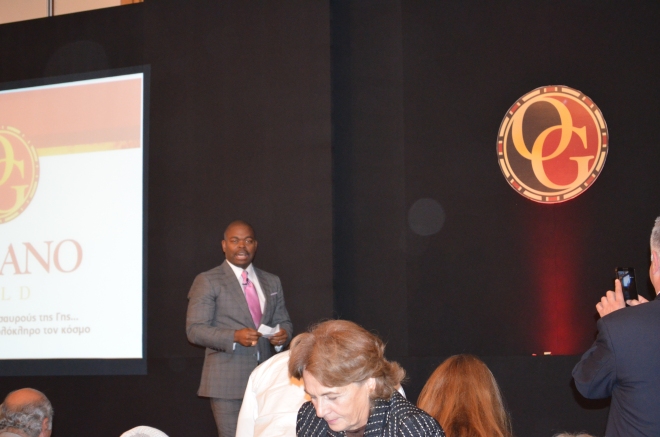 This is something that I have come across often and it is actually true. If you want to succeed you must watch the people you surround yourself with. Mr Buggs message was exactly that, if you want to own a Lamborghini you must become friends with the Lamborghini people. If you want to be successful, strive to be amazing.
Holton Buggs’ Lamborghini mentor gave him a list of books to read, so he shared this list which you will find below:
“Think and Grow Rich” Napoleon Hill
“Developing the Leader Within You” John C. Maxwell
“How to Win Friends & Influence People” Dale Carnegie
“Secrets of the Millionaire Mind: Mastering the Inner Game of Wealth” T. Harv Eker
“The Richest Man in Babylon” George S. Clason
“Skill with People” Les Giblin
“The Master Key to Riches” Napoleon Hill is actually Holton Buggs favourite book and his favourite chapter of the book is “How to define your purpose”
Have you read any of these books?

Discovering Elounda and the Spinalonga Island